After recent conflicts saw the death of over 80 animals in the Gaza zoo, three surviving big cats have finally found shelter in Jordan. 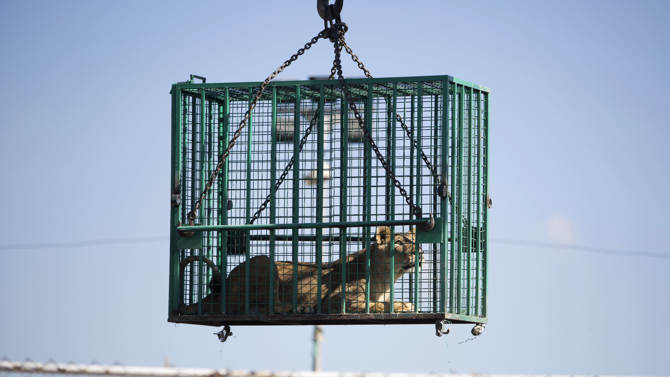 The recent Israeli offensive against Palestine left many victims in its wake. Often forgotten in times of war, is the plight of zoo animals who are left to die a slowing death. We mentioned the need for help at the Gaza zoo weeks ago, and found out today that a trio of malnourished lions have finally been rescued.

A pair of males and a pregnant lioness have finally left Gaza via Israel and will be living a new life in a wildlife sanctuary in Jordan. Largely responsible for saving their lives in the organisation Four Paws who arrived in Gaza weeks ago to deliver urgent care and relocate animal survivors of the recent 50 day war.

The war left the zoo devastated and during that time over 80 animals died from the result of fighting and neglect. Even without the havoc caused by war, the Gaza zoo is notorious for having a terrible animal welfare record. When many of its animals died, the zoo began improvising to keep the deceased animals on exhibit. If that wasn't bad enough, they have even gone as far as painting stripes on donkey and attempting to pass it off as a zebra.

Clearly conditions at the Gaza zoo is unacceptable and should be shut down, but the first sign of hope for the remaining animals starts with the rescue of these three lions, and hopefully will be the start of saving and relocating survivors from this unequipped and mismanaged institution.