This wall to wall artwork shows the blueprints of how a humble dining establishment can create social solidarity. 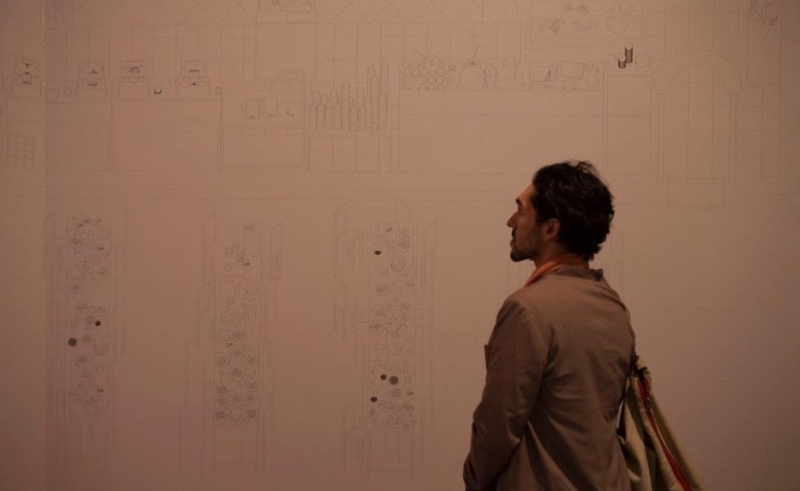 Through a six-months analytical study of Imbaba's Kebdet El-Prince, one of Cairo's busiest food spots, Egyptian Architects Omar Kassaab (@Farkhawy) and Mostafa Youssef (@MostafaaYoussef) produced their large, wall to wall illustrative artwork 'Culinary Cairo: From the Dinner Table to the City'. As a part of @CICcairo's latest exhibition 'Butoun', which aims to explore the relationship between food culture and society through a series of artworks, the architectural duo present a painfully accurate graphic depiction of one of Cairo's most famous culinary spots.

"This drawing presents a spatial analysis of one such culinary space. As a thriving business in a typically marginalized and underserviced settlement, the popularity and cross-societal appeal of the culinary experience at El-Prince has rendered it a rare instance of social cohesion in the public realm. " Kassab told us about the large, wall-to-wall artwork when speaking of his observations. "Hungry costumers from all social strata dine side by side, with minimal differentiation. In turn, the improved business has extended economic benefit to the restaurant’s vicinity."

Kassab went to further explain that one of the aims of this artwork was to explore new bottom-up modes of development and urbanization based on sensitive, in-depth analysis of spaces without disrupting their unique urban fabric.

"These culinary spaces stand as a symbol of individualism, preserving the local dining culture. " Kassab told us. "They show us what is happening down at the level of the dinner table and how it can have implications that extend across a neighbourhood and the entirety of the city." He hopes that his drawings serve as a demonstration of how such culinary experiences are key to maintaining strong societal and communal bonds. To join the conversation and catch the intricate, detailed artwork in its full glory alongside other artworks from 'Butoun', you can find CIC at their exhibition space in Downtown Cairo.