Mocking the feminist movement in Iran which encouraged women to ditch their law-imposed veils, Iranian men are now donning the hijab... 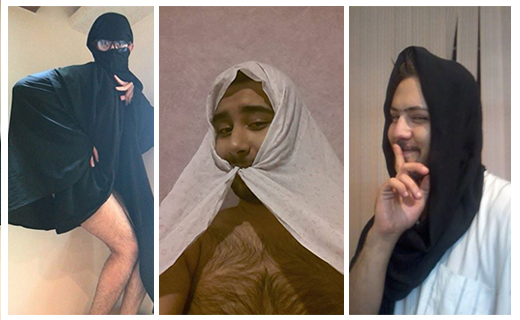 You may recall when a few weeks ago, Iranian women took to Facebook and flooded the social media site with images of themselves with their hair uncovered, to spark a debate about the freedom of choice regarding the veil. But now, a new trend has emerged in the uber-conservative nation; Iranian men are posting their own versions of the photos, wherein they don a veil in what seems to be a mockery of the My Stealthy Freedoms campaign.

The initial stealthy freedoms campaign, a group on Facebook started by London-based Iranian journalist Masih Alinejad, exploded on the internet, receiving over 30,000 photos within just a few days of its creation. After it gained popularity though, it also received backlash. Some of this took on a more mocking tone, such as the newly created Facebook group Men's Stealthy Freedoms, where men are poking fun at the entire campaign with (rather hilarious, we must admit) photos of themselves with headscarves on. It seems to be more light-hearted than menacing, but other groups and incidents in the country have not been so amusing.

Rival Facebook group, Real Freedom of Iranian Women was created in direct response to the original page, members claiming that the hijab is in fact freeing and posting to state that it should be compulsory for women across the board and that the choice should not exist. One particular post had the word rape written across a photo of three Iranian journalists living abroad, broadcasting unveiled and carrying the message that women who forgo the hijab are more likely to get raped.

Two small rallies were held in Tehran as a counter-attack on the Stealthy Freedoms Facebook group, with hardliners demanding that authorities enforce the rules of compulsory veiling, in according with the Islamic law set in place with the country. This also comes amongst more pro-hardline-Islamic sentiment, such as the hoopla caused when Iranian actress Leila Hetami kissed the ageing President of the Cannes Film Festival on the cheek, and the group of young women who were arrested following the video of them dancing to Happy.