An Iranian school teacher has created a robot to teach and encourage little Muslim boys and girls to pray. 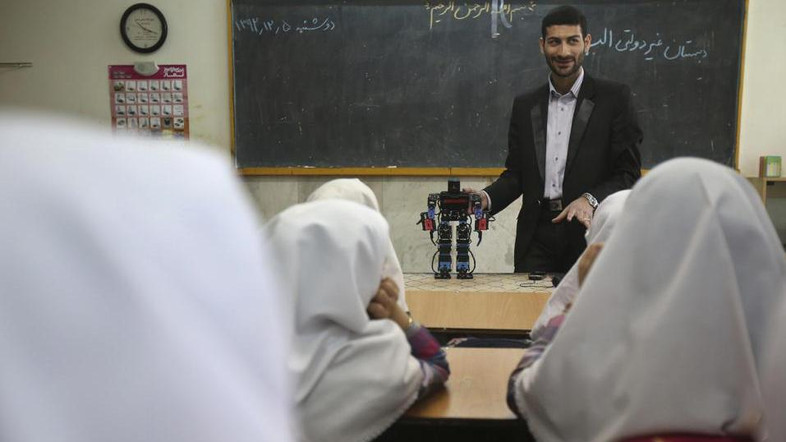 Robots are taking over the world, as every year we get closer to James Cameron's post-apocalyptic Terminator filled future. The latest robotic innovation comes via an Iranian school teacher who has given birth to the first robot that can teach young Muslim children how to pray.

The teacher, Akbar Rezaie, took a course in robotics and with that knowledge decided the world needed an instructional robot that can teach the Quran and the mechanics of prayer to young boys and girls attending Alborz elementary school in Varamin. The idea came to Rezaie, after seeing a western doll sing and dance.

“Once I was at a family gathering where there was a little girl playing with a doll that could dance and sing. I saw her watching the doll passionately and it made me contemplate on a making a device that can be used for both religious and entertaining purposes,” he told AP Television.

Using only basic tools at home and a Korean robot building kit, Rezaie was able to make a robot that mimic the movements in prayer by adding two additional motors. He named his robot 'Veldan', a Quranic term meaning: “Youth of Heaven.”

“It was so exciting to me to see a robot pray. I have decided to always say my prayers too,” said Narges Tajik, a third grader at Alborz School said. Apparently the robot has been a huge success with attracting students, and Rezaie believes it should be mass-produced. He has formally applied for the patent and intellectual rights license from Iran's State Organisation for Registration of Deeds and Properties.

It should be noted, however, that there is really very little innovation involved. However, that isn't our only concern. We're left asking questions like: Is it sacrileges if this toy gets mass-produced and little children start using the Robot Imam during play time? It isn't likely that they would be using the robot to lead the rest of the toys in prayer? Will Barbies need to cover up in the vicinity of the praying robot? At the end of the day it we guess it is better that Iran is busy innovating harmless robot for children, as opposed to making life size religious robo-cops enforcing Islamic law.