An ultra-Orthodox Jewish site covered Kim Kardashian with a receipt, while simply referring to her as Kanye West's wife. Check out the original photo here... 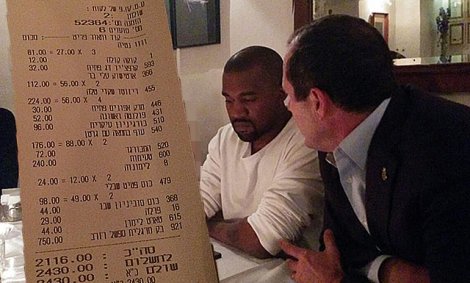 So, yes you may not be able to open your eyes in the morning without seeing Kim Kardashian and her giant behind plastered everywhere from Instagram to magazines to news sites, but if you happen to be an avid ready of uber-Orthodox Jewish website Kikar HaShabbat (because, yknow, who isn’t?) then you can rest assured you shall never see a picture of her. The news site actually cut Kardashian out of a photo taken of her in Jerusalem this week.

In the original picture, Kardashian and her rapper hubby Kanye West were having dinner with Jerusalem’s mayor Nir Barkat (when Kanye isn’t busy insulting people at award shows he likes to casually dine with political figures). But in the photo the news site published, Kim was hidden behind a restaurant receipt. Very subtle, guys. In another one, she was blurred out.

The article, which was none too happy that Barkat was dining with the couple in a non-kosher restaurant, also basically refused to acknowledge her, referring to her simply as “West’s wife.” It’s okay Kimmy, don’t take it personally; in hardcore Orthodox Jewish circles they regularly hide photos of women out of modesty. Oh no wait, do take it personally, because the editor of this particular website, Nissim Ben Haim, said Kardashian was removed because she’s a “pornographic symbol” and that just does not go hand in hand with the values of Orthodox Judaism.