We sit down with the brains behind Krak Baby - Cairo's coolest up-and-coming street wear brand - to find out the secret to their success, whether they'd make a t-shirt for Mubarak and if they've tried crack... 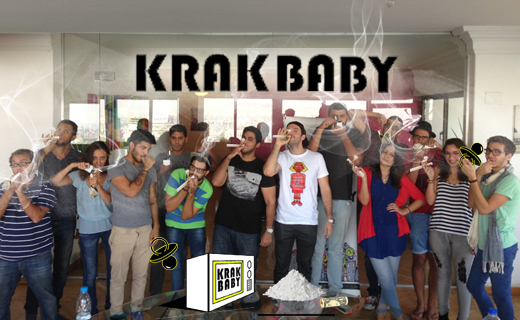 In a country blighted (for lack of a better word) by oriental fabrics fused with western styles, neon colours fused with oriental fabrics, and western styles fused with neon, Krak Baby is a godsend. The two young founders, Hatem Hannoun and Moustafa Moussa, set out to create a street-style brand in a market that had none, taking inspiration from  Pop culture during the infamous crack decade; the naughty 90s. With their iconic pharaoh t-shirts blending ancient Egyptian symbolism with the western characters we grew up watching on TV, they’ve slowly built up a reputation as a brand to look out for, not just in Egypt but globally, having already garnered interested from a scattering of international blogs and celebrities on the music scene. What separates Krak Baby from many other generic t-shirt makers here is their insistence in creating the lifestyle around the brand. From their ingenious zip-lock packages to their brand ambassadors, they keep quantities limited and make sure they’re always working on new products and ranges to keep things fresh. We speak to the budding designers about creating a brand image, addiction and DJs…

Have you ever tried crack before?

Have you ever eaten a baby before?

Okay great, so how did this idea come about for you?

Hannoun:I spent a lot of times on blogs and at the time I was running my own thrift store in Zamalek, selling cool vintage stuff but I got bored of that and I knew Moussa was pretty good with graphic design and illustrating…

Moussa: I didn’t study art or graphic design. I learned mainly from tutorials on YouTube and I just got into it.

Hannoun: And I’m really into the whole world of street culture and street wear, so I was on the phone with Moussa and suggested we try something out. We started working, bouncing  ideas off each other and it became more and more real the more we talked about it.

Moussa: It grew really organically. Day by day we were coming up with better and better ideas. After we came up with the story for the brand, we thought we would be smart to package the t-shirts in baggies like you’re scoring crack.

What did you parents think about that?

Moussa: My dad threw a shit fit when he saw the ‘Krakhead Tee’ with cocaine on it! He was like, “I’ve been spending all this money on your education and this is what you come up with!”

Have you got your dad to wear one yet?

Moussa: No. Not yet, it’s a challenge!

Hannoun: My dad is more business orientated so he doesn’t really care about the designs, he just keeps asking things like, “Why is there still so much stock lying around? Why aren’t you selling?” Things like that.

What was the original direction of the brand?

Hannoun:The original idea was to blend something from our culture here with what we are influenced by, like the media and the internet because we grew up consuming western culture more than our own. We found a way to blend them together.

So was there a specific brand that inspired you?

Hannoun: Bape. I’m not a big fan of their stuff right now but I appreciate what they have done to the whole street wear culture. I was really taken by how they took the whole thing by storm and the way they had such an influence on a whole genre of music for such a long time. We’re trying to emulate that kind of success.

What do you think is their secret to success?

Hannoun: Right now, the internet can let people hop on to a lot of things but they fade out pretty quick.

Moussa: If you are into a specific brand and you want a t-shirt from them, then you find someone else wearing it, you feel like AHH! So success comes from a mix of availability and exclusivity. If you balance the two then it is going to work out.

Yes, as far as exclusivity goes, Egyptians don’t like to wear what someone else is wearing in such a small scene. How do you tackle that?

Hannoun: Exactly. Virgin for example, have a lot of cool t-shirts but if I buy one, there’s probably too many other people with the same one. We wanted to keep that in mind when making our stuff, so everything we make is limited in quantities.

Moussa: We limit each design to 50 t-shirts per design, in all sizes, so lots of times we run out of the sizes people want but we do not reprint, which works to our benefit.

Who is the highest profile person wearing Krak Baby right now, and who would you like to wear your designs?

Moussa: So far the UK rapper Clement Marfoe is the highest profile. One guy we have in mind to wear our brand is Kendrick Lamar. He doesn’t seem to come across as too commercial.

Hannoun: A lot of times when we were thinking up designs, we were listening to Kendrick Lamar.

Is there anyone you’d refuse to sell a Krak Baby t-shirt to?

Hannoun: We have to be careful with the level of hype as these things tend to fizzle out with too much exposure.

What if Hosny Mubarak asks for a custom-made Krak Baby t-shirt?

Moussa: Yeah, why not? I couldn’t care less about politics to be honest, it’s just my life is being affected by what’s happening now… Things were more chill back in the day.

So you started getting DJs to wear your designs…

Hannoun: We have to get exposure somehow so we might as well start with what’s available.

Moussa: A lot of these DJs are my friends as well. We made custom ones for Aly B, minus t and Fulltone and everyone was really into them.

Are you not worried to attach your brand too closely to the culture of DJs and House music?

Hannoun: That’s the thing. I don’t want it to seem like it’s something for DJs to wear. I think we are more Hip-Hop-oriented but there isn’t much of a Hip-Hop scene in Egypt, at least in nightlife.

Do you see your brand expanding to something more than the current line?

Hannoun: Yeah. We started working on that, we have snapbacks [hats] and we are working on shorts and some winter wear. We’re taking it step by step and adding something new to every line.

Why do you think differentiates your brand from the other illustrated t-shirt lines coming out in Egypt?

Hannoun: We are not expecting to rely on just our designs selling themselves without anything behind them. We want people to have some sort of connection to the brand. We don’t want to be mainstream, it’s just more than the look of the t-shirt, it’s deeper than that. Some brands abroad come out with shit designs and they sell up in a second because people have the connection with that brand and that’s what we want; we want people to feel loyal to the brand.

Moussa:I think the closer we keep to who we are, the more it will work out in the future rather than selling out early. Look at what has happened with Ed Hardy it’s a mess, it’s a joke now…

Hannoun: There isn’t really any other street wear brands in Egypt. There are a lot of people making t-shirts here but no one is pushing the concept or story behind the brand.

Moussa:Hannoun and I agreed to the beginning we’d only design things that we ourselves would wear.

There’s a roof on the kind of people into street style in Egypt, so is your main goal to sell internationally?

Hannoun: We want to get to your point where we are quite solid in terms of sales here and then we start searching out for the boutique stores abroad.

Moussa: I have few friends in London, New York and Canada that I’ve been sending the t-shirts to and they’ve been selling them there on the down-low and it’s really catching people’s eye. So hopefully we’ll start getting in stores in London or Canada soon. We’ve been featured on a few international blogs already and they’re always very helpful in terms of advice and exposure.

What’s your best-seller so far?

And your worst? Something which you realised was a bit pointless…

It’s notoriously difficult to manufacture quality apparel in Egypt. How was the process for you?

Hannoun: We’ve worked with a couple of factories. Our older collection was done by a different manufacturer than the newest , which was a problem as the sizes were be slightly different. It took us a while but I think we’ve settled with one now for the time being.

If some rich kid comes a long and asks for a Krak Baby tee with his face on it, would you customise it for a fee?

Hannoun: We call it ‘Krakifying’ someone and we’ve done it with very few people. It’s not a service we provide, no. Not sure if we’d entertain the idea or not…

Okay let’s say you have unlimited funds. How would you market your brand?

Moussa:I will throw the biggest party ever. I’d go all out.

Hannoun:Probably invest in getting our stuff into the best boutique stores around the world…

That seems more responsible than a party. So the promotional videos you recently came out with were interesting…

Hannoun: Hahaha. Yeah, our friend Omar Marei just sent us a link to them one day as a surprise; we had no idea they were being made. We were watching and thought it was just an automated video where you type in some text, and then he started talking more specifically about the t-shirts and it being 100% Egyptian cotton and then spelt out the website. It was crazy.

As partners do you guys ever argue about design or marketing decisions?

Hannoun: Not that much. We might have conflicting views but then we get to a conclusion in a couple of minutes.

Moussa: We are similar but different in the sense that Hannoun is more about living properly and healthy and doesn’t go out and party as much, so it’s a nice balance. We always come to a compromise, we’ve never had an argument that we cannot solve by talking because we’re both rational and have been friends since we were five.

Have you get anything special planned for the next collection?

Hannoun: I do not know if we can say much about it yet but hopefully it’s even better than the last line.

Why don’t you put actual drugs in the baggies as a marketing tool? That would sell well…

Moussa: Hahaha, we try to play around a lot with the idea of addiction and drugs.

Hannoun: It’s about the evolution of addiction and how, as kids, you overdose on the things that are fun for you. TV, movies, cartoons, video games… and as you grow older that turns into getting intoxicated and partying. But it’s all about trying to have fun.

What are guys addicted to?

Ahh, is that what the kids are calling it these days. What advice would you give for budding designers here in Egypt?

Hannoun: I would say honestly focus on the story of your brand and what you are trying to sell and not just the design and how cool it is.