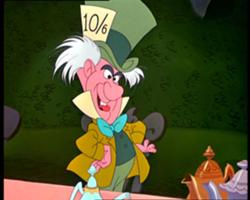 A group of Mad Hatters are planning to go down the rabbit hole and stage a pub crawl in downtown Cairo. The organisers hope to show Cairenes how to have fun after dark without the dresscode and ridiculous cover charge. The Mad Hatters collective, named after their crazy headgear and crazy disposition, organise regular party events in Cairo, with one goal in mind: one hell of a good time. And now Cairo's most popular party squad are heading off to wonderland once again with a top secret party happening this week.

The concept around the event is simple: participants visit one of the ten bars on the list and have a drink in each venue before moving on to the next. Games and competitions are also held through the night to add to the fun. One of the organisers Mohamed Abouzikry tells CairoScene how the recipe for memorable shenanigans simple: "We want to attract fun-loving people who want to have a good time / We don't organise these parties as a way to make money - we just want to show people that you still can have a fun night out in Cairo... a different side to living in Cairo, a part of the city which many people rarely see. When walking through Downtown Cairo, I often feeling as though I'm walking through Paris at the end of the Second World War."

And what better way to rediscover Cairo than with a drink in hand? Better yet, you can actually talk to your friends on this unique night out: "We want to remind people that you can go out and have fun without listening to ear splitting music and spending your night posing on the dance floor," says Abouzikry. "We work out deals with some of the bars allowing our group discounts on drinks and generally just go out to indulge in some old school debauchery." However, this isn't Abouzikry's first venture into the world of not-for-profit parties. "The idea started out because my friends and I were bored and we just decided out of the blue. We used to run Kazam private parties before the revolution but since then the situation has always been unstable for either political or religious reasons. Finally we're able to do this again and we're really excited about watching our events grow."

As for this week's event - well, we've been sworn to secrecy, as access is limited to those in the know. But ask your friends, your taxi driver and even your bawab and you too could be off to Wonderland (kinda) with Alice, the Queen of Hearts and the capital's latest secret party collective.