They include 354 items from the pharaonic and Islamic eras. 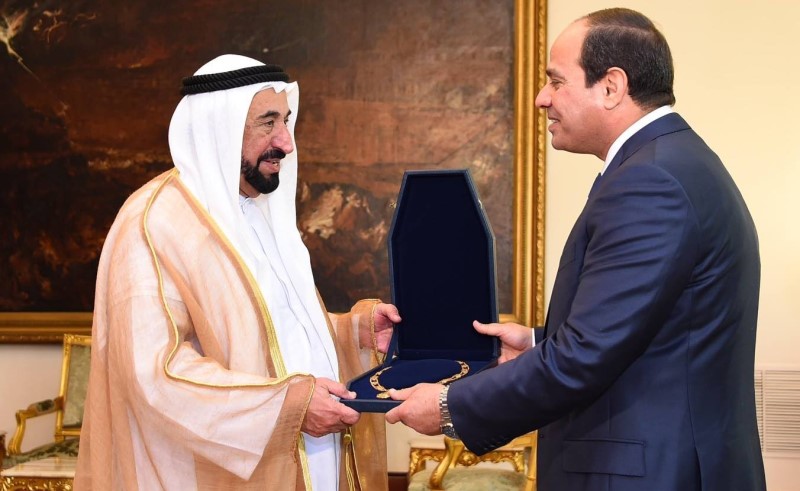 The ruler of Sharjah, Sheikh Sultan bin Mohammed Al Qasimi arrived in Cairo on Saturday, bringing with him 354 Egyptian artefacts that were seized in his country, according to Agence France-Presse, citing the Egyptian Antiquities Minister Khaled El Enany.

Details of how Emirati authorities seized the archaeological items, or from whom, were not immediately clear, though Gulf News reported that they were confiscated at Sharjah International Airport. Al Qasimi arrived at Cairo International Airport to begin an official visit that will also take him to the resort city of Sharm El Sheikh to participate in the World Youth Forum. He is also due to visit a number of medical facilities, as well as cultural and educational centres.

He was greeted upon his arrival by a high-ranking delegation representing the government, which included Minister of Housing Mustafa Madbouli, UAE Ambassador to Egypt Juma Mubarak Al Junaibi, Shaaban Abdul Jawad, director of the Egyptian Central Department of Antiques, and a number of representatives of the Ministry of Antiquities, among other public officials.

El Enany said that the pieces will be displayed in a “special exhibition” at the Egyptian Museum in Cairo. His ministry often announces the recovery of stolen artefacts, and Egypt has long sought to return ancient treasures that have fallen in the wrong hands. Some of these include pieces on display in European museums, like the Nefertiti Bust in Berlin.

Main Photo: The National. President Abdelfattah El Sisi awarded Sheikh Sultan bin Mohammed Al Qasimi the Order of the Republic in 2015 for his contributions to Egypt.