Speaking With Sara Sabry - The Astronaut Representing Egypt in Space

We had the opportunity to sit with Sara Sabry - Egyptian astronaut, robotic surgeon, yogi and more - to hear about how she juggles her academic passions with her sanity and personal life. 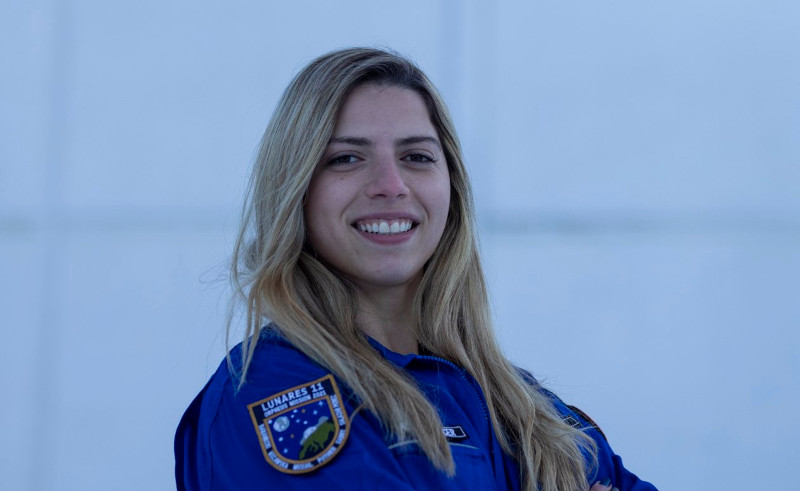 It is a day and age where the need for representation is at an all time high – not just in media, but in various fields. We’ve seen the impact of May Calamawy as the first Egyptian superhero to appear in the Marvel Cinematic Universe with Moon Knight, directed by Egyptian filmmaker Mohammed Diab. We are currently witnessing a renaissance of Arab presence in the Western world. And we at CairoScene can tell you first hand that it’s bigger than seeing Arabs in shows and films, however significant that is – it’s seeing Arabs, particularly Egyptians in this case – in spaces that shift the direction of the world’s future. Or even the galaxy’s.

Egyptian astronaut Sara Sabry is just that. Having studied Mechanical and Biomedical Engineering in Italy, followed by a course in Aerospace Engineering at the Massachusetts Institute of Technology (MIT), Sara Sabry is the first female Egyptian Analog Astronaut – with a wide range of experience. Think Mechatronics and Robotic Surgery, to Stem Cell Development and Bioastronautics. If that wasn’t impressive enough, she is also the CEO and founder of Deep Space Initiative (DSI), a non-profit company that aims to increase accessibility and opportunity for space research.

During her undergraduate studies in Egypt, Sara was a Yoga instructor, CrossFit coach, and spent some time practising Mixed Martial Arts.

So how does one woman balance it all? CairoScene had the opportunity to sit with Sara Sabry and hear about how she juggles her academic passions with her sanity and personal life.

For Sara, a typical day is waking up at 5 AM, working out, and then beginning work at around 8 AM. She’ll plan her day, answer emails, get work done, and take calls and meetings towards the evening.

“It requires a lot of discipline,” Sara shared over a Zoom call. “Sometimes something will happen that will disrupt the routine.” That being said, the young science wizz always seems to bounce back. She shared that yoga played a big part in this. Starting off as a fun elective, it quickly became her favourite surefire way of finding peace of mind in her day – so much so that she acquired a certificate to be able to teach it.

But uplifting herself and others around her is something that Sara has always carried with her. She was fascinated with space and saw a gap that needed to be filled in the industry. NASA needed not just more women – but more Arab women. It was then that she decided to take matters into her own hands and create the Deep Space initiative, as well as help facilitate the building of the first analog research station in Africa.

Analog Astronauts receive the training of real astronauts in simulated conditions, almost as a ‘test’ or a ‘prototype’ of a real mission. The purpose is to iron out every detail and potential catastrophe before a real mission into outer space, which costs billions of dollars to launch. “Analog Astronauts are crucial in space travel. We are put under the exact same conditions – zero gravity, getting suited up, and being confined in an enclosed space for extended periods of time. We experience all the same psychological effects real astronauts will endure.”

In helping the Egyptian government build the first analog research station in Africa, Sara catalysed an entire movement of bringing Egypt closer to having a stake in the space race. It provides Egyptian aeronauts a platform with which to expand their knowledge, giving them the opportunity to come to the table with their own unique perspectives and research.

Sara explained what this means to her. “I want to help make it a viable and valid career option for Egyptian people, especially young women. Most of the time we veer towards being a doctor, or lawyer, or engineer…for the longest time my parents still didn’t really understand what I did. The idea of space work is not generally understood or considered that significant.” It does trigger the perspective that many might be of the opinion that there are enough problems on this planet to solve, before worrying about another one. Sara wholeheartedly disagrees.

“We need space research to solve Earth problems,” she explained fervently. “So many of the simplified solutions we see on Earth today were developed in order to make space travel more efficient.” For example, satellite technology which was developed in part to track life on Earth and out of it, has been used to predict the weather, with meteorological forecasts able to act as early warning systems for extreme weather events. Frozen food was also developed through space research. Through a collaboration with giant food company Nestle, NASA developed a technique for freeze-drying food to make the transportation and preservation of food in space more efficient. On Earth, freeze-dried food has proven to be a fast and cheap way of alleviating the demand for food under low incomes.

That being said, Sara is looking to contribute more to helping the world develop through space technology, and through carving Egyptians a space in that world.