The Archaeological Institute of America's ‘Archaeology Magazine’ has placed the discovery of 100 well-preserved coffins at Saqqara on its list of 'Top 10 Discoveries of 2020'. 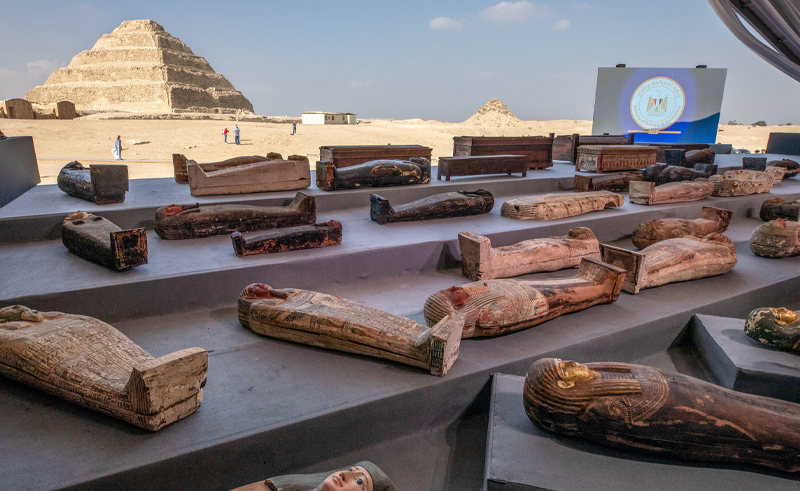 In the second half of 2020, over the course of a few months, the whole world bore witness to the biggest Egyptian archaeological discovery of the year: a cache of 100 well preserved, vividly painted Ancient Egyptian coffins at the Saqqara necropolis, spread out across three burial chutes. Notable figures and ambassadors from across the world gathered at Saqqara in November to say 'We were here' during the announcement for the discovery. One of the United States's most renowned archaeological publications, the Archaeological Institute of America's ‘Archaeology Magazine’, seems to agree on the importance of this discovery, having placed it on its list of 'Top 10 Discoveries of 2020'.

The coffins contained the remains of individuals who died up to 2500 years ago, with 40 statues of the funerary deity Ptah-Sokar-Osiri and a bronze sculpture of the Ancient Egyptian god Nefertum placed among them. According to Secretary-General of Egypt’s Supreme Council of Antiquities, Dr Mostafa Waziri, the coffins most likely belonged to priests and high officials at the temple of Bastet, the goddess of cats, fertility and domesticity.

Archaeology Magazine's Top 10 Discoveries of 2020 list includes a Luwian Royal Inscription in Turkey, the first English playhouse in London, England, a shrine to Romulus (the mythical founder of Rome who was raised by wolves) in Rome, Italy, and the oldest piece of Chinese artwork found in Henan, China.