9-year-old Siham Ahmed drives a tuk tuk for a living in a village in Kafr El Sheikh like nobody's business! 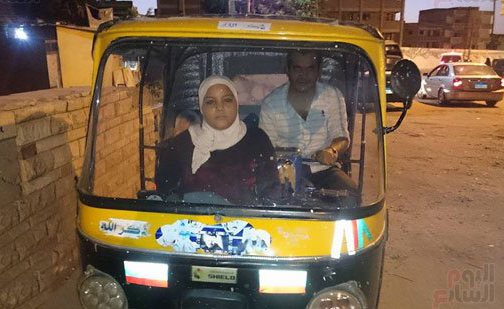 Nine-year-old Siham Ahmed (a.k.a. Shakira) didn't think twice before asking her dad to drive his tuk-tuk in his stead to support her family when his health deteriorated and he couldn't work anymore.

However, little Siham probably didn't account for 'what society might say' in rural Kafr El Sheikh when a young girl like herself joins the male-dominated tuk-tuk driving business! And it's probably because she couldn't care less!

A preparatory (middle) school student, Siham starts her workday after the school day is over and doesn't go home until sundown. According to her, people's reactions have been largely supportive of her commitment to supporting her mother, sister, and sick father, but said that sometimes, her schoolmates will tease her about what she does for a living, not that she heeds them!

Ahmed has been driving her dad's tuk-tuk for four years now, but she hopes to get a job that is better suited for her once she graduates university, adding, however, that she wouldn't mind keeping this job because there's no shame in earning one's living.