What Happened to King Tutankhamun's Mask?

Allegations of the mistreatment of antiquities have resurfaced in Egypt, as journalists discover something awry with the legendary mask of Tutankhamun at the Egyptian Museum... 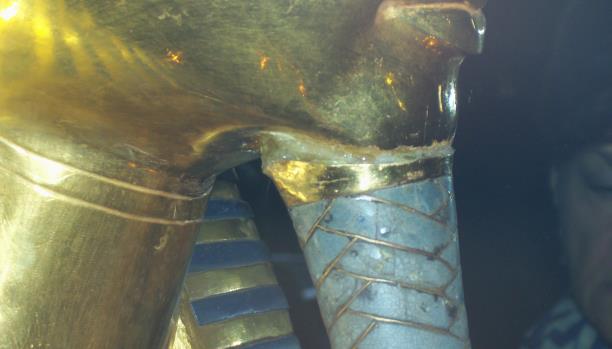 London-based Arabic news site Al Araby Al Jadeed has released an exposé, accusing those in charge of Egypt's precious antiquities of negligence, after they were tipped off that something wasn't quite right about the legendary mask of King Tutankhamun, currently residing in the newly-refurbished Egyptian Museum. Upon arrival, the hall that plays home to the priceless relic was notably dimmer than the rest of the museum. On closer inspection, it becomes apparent that the famous blue and gold braided beard - a symbol of royalty and divine ranking in ancient mythology - has been glued on to the boy king's chin. On the left side of his chin appears to be considerable damage.

So what happened? Speaking anonymously to Al Araby Al Jadeed, a museum employee admitted that during the renovation of the iconic museum in October 2014, the team were ordered to clean the mask of Tutankhamun, when it was accidentally damaged, causing the beard to break off from the chin. Usually, when unintentional breakages occur, it is compulsory to report it to the Ministry of Antiquities so that specialists can be deployed to fix it professionally. However, in this case, the source at the museum explained that these procedures were not followed. Instead, the head of the renovations team, Elham Abdelrahman, is alleged to have panicked and called her husband - also working on the renovation of the Egyptian Museum - who decided he'd repair the mask himself, using epoxy glue which can be purchased at any DIY store, and cannot become unstuck. To make matters worse, the glue was used abundantly, and spilled over, drying visibly on the left-hand side of the beard and chin. To "fix" this glaring evidence that the mask had been tampered with, the team attempted to scratch off the residue, only damaging it further.

You can read the whole investigation by Al Araby Al Jadeed here (Arabic).

Are we finally going to get along any time soon? [...] 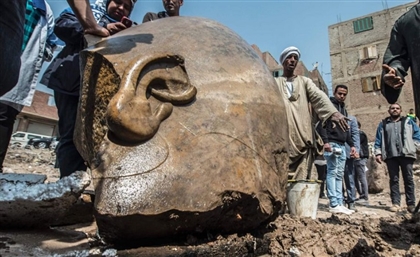 A massive statue was just found in a Cairo neighbourhood of Matareya, and this [...] 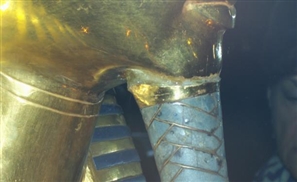 As the Ministry of Antiquities begins the restoration of the King Tutankhamun's [...]
Week Month Year