Our intrepid squash-slaying duo are at it again. 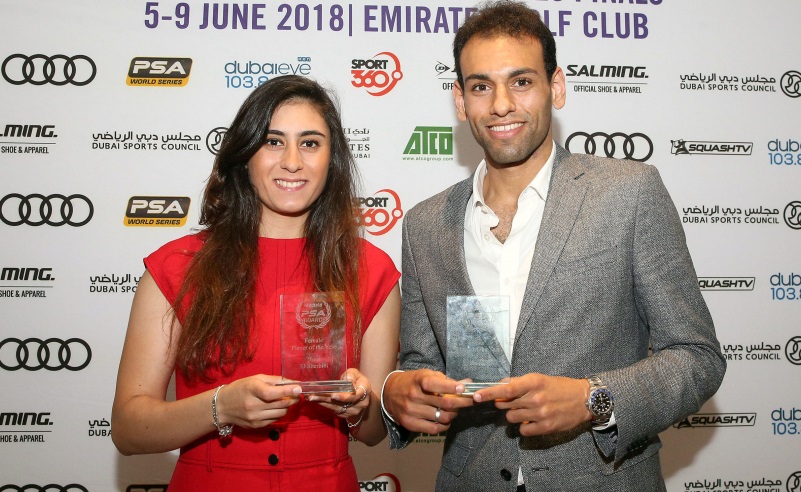 The final round for the men’s and women’s squash games was held between Egyptian players, taking the top ranks of the games; Mohamed El Shorbagy versus Ali Farag for men, and Nour El Sherbini versus Raneem El Welily for women.

The game was marked as one of the “most competitive and thrilling seasons” that the PSA World Tour has witnessed, according to the World Squash Federation

Just before the game, Elshorbagy had tweeted:

Playing my 50th final on the @PSAWorldTour tonight and my 12th final in the last 14 events I played! Going to try to end my season on a high and I am glad to be playing in the last match of the season! #BeastMode

And what a win it was! Elshorbagy defeated Farag in a heated match, beating him in three games out of four.

We can’t begin to fathom how El Shorbagy must be feeling, claiming the PSA Awards for the second year in a row, after already claiming the PSA World Champions title in December, and leading the men’s tours after winning a total of seven titles.

And what a season it is for Nour El Sherbiny too, who was awarded such a feat for the first time in her Squash career, winning against Raneem El Welily on Saturday. El Sherbiny previously won four PSA World Series titles.

She claims that it is difficult to paly the same players every month, as you have to revise your tactics and moves, and be one step ahead of your opponent.

“We’re always pushing each other and we definitely learn from each other. I’ve been watching [Raneem El Welily] a lot and learning from her a lot and it’s an honour to battle with her the whole season,” Nour El Sherbini said after the game, according to the PSA World Tour.

Egyptians seem to be increasingly dominating squash tournaments, with 10 of the top 16 players being of Egyptian nationality. We’re anticipating to see the same being reflected in the Young Player of the Year awards, performed by Mostafa Asal and Hania El Hammamy.