We head to the Four Seasons Hotel Cairo at Nile Plaza to check out 8, Egypt's most famed restaurant, and go on a four-hour taste trip to modern China... 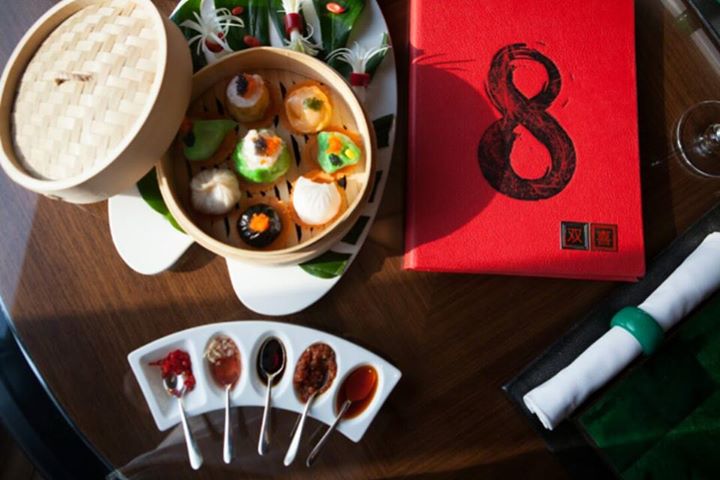 It's undeniable that the CairoScene team spend a lot of their time (and most of their money) on food, glorious food. Whether it's two-hour long brainstorms on what to order in the office or fights over who gets to go review the latest restaurant to hit Cairo, we spend more time thinking about eating than we often spend actually eating. However, when it came to checking out 8, the decadent, gourmet Cantonese restaurant at the Four Seasons Hotel Cairo at Nile Plaza, we spent hours - and we mean hours - lingering over every bite, dissecting every taste that hit our palates and saying 'mmmm' way too many times (and way too inappropriately). A good four-hour culinary journey, 8 isn't your average hotel restaurant; it's a destination in itself and from the moment you enter, it whisks you away to a cinematic representation of modern China - traditional enough that the unique tastes of the Far East remain the stars of the show and chic enough that you know - you just know - that some multi-million dollar deals are going on around you as you dine, given the stellar quality and notorious businessmen, celebrities and public personalities that you'll find frequenting the Nile-front restaurant. At this point, you're probably wondering: is it really that good? We're here to tell you, yes. Yes it is. So we enter 8, and immediately the hustle and bustle of the city and the general buzz of the hotel's lobby is shut out. We're seated right in front of a floor-to-ceiling window with nothing to stare at but the glistening Nile and twinkling cityscape. Before we're done admiring the view, two waitresses appear, stealthy and sophisticated in their traditional Chinese garb. One hands us warm towels to freshen up with, while the other presents us a stunning leather-bound menu. In the other hand, she holds a sprawling wine list, combining both local and international wines. Wine chosen and sparkling water poured, it was time to really digest the menu.

Our journey began with ordering soups, a staple in Chinese dining, and a great way to get our metabolisms going. We chose the Seafood Hot and Sour Soup - a classic Cantonese combination of flavours - and the Seafood Sweetcorn Soup for a gentler start. As we perused the first few pages, we knew we had to also sample their traditional Dim Sum, of which they serve the classic steamed kind, as well as fusion, fried styles. With at least 20 different dumplings to choose from, the 8 team could see us fumbling through, uncertain of which to pick. They quickly came over and suggested the chef prepare a selection combining his favourites for a curated culinary experience. We dutifully agreed and, before we knew it, we got to whet our appetites with an amuse-bouche; a perfectly golden BBQ Chicken Bun, atop crispy crackers. From that first bite the 'mmmms' began, and only got louder and more inappropriate once our starters arrived. The Hot and Sour Soup was just that and seemed to cleanse the palate thanks to its balance of vinegar and spice, laden with all sort of sea creatures. The Seafood Sweetcorn soup was also brimming with fish and seafood, while the sweetcorn and egg whites gave it a smooth sweetness. Our selection of Dim Sum, as chosen by the restaurant's head chef, came beautifully presented. On the steamed side, the basket came with three kinds: scallop and vegetable, shrimp and bamboo shoot, and finally lobster, scallop and crab. Needless to say, the seafood tasted delicate and plump, clearly fresh off the fishing boat, and the dumplings themselves looked almost too good to eat. After a few Instagrams, we delved in to the fried selection: a classic vegetable spring roll, crispy crab claw with shrimp and almond paste and the fusion of all fusion foods, shrimp konafa. Amazingly, none of the fried Dim Sum were greasy. Instead they were golden brown, perfectly crisped and the seafood was cooked perfectly.

When it came to main courses, the perfect frying technique presented to us through our starters had us gravitate towards more fried seafood: the crispy lobster meat with garlic salt, to be precise. We also tried the wok fried chicken in honey black pepper sauce, as we were inspired by the balance of opposing flavours the culinary team had achieved with our starters. The lobster, which we ordered with a side of fried seafood rice with classic XO sauce, was without a doubt one of the most delicious things we've ever eaten. The lobster pieces were generous, plump and sweet, lightly coated in a tempura-inspired batter, and fried to excellency, while the garlic salt and fine slices of chili gave it the kick a rich dish like this needs. Meanwhile the chicken had us forget everything we knew about Chinese food; instead of the usual gloopy, over-salted, drowning in sauce dishes we've eaten in Asian restaurants across Egypt, we found a delicate dish, combining sweetness and spice, and a whole load of fresh vegetables. While we never tend to think of dessert when it comes to Asian cuisine, rest assured that 8 pulls off sweets with equal panache. Despite being short and concise we had some trouble choosing from the dessert menu - so we chose three. First was fried banana and custard spring with vanilla ice cream, which were surprisingly light due to the fact that the dessert relies on the natural sweetness of banana and vanilla, rather than overloading it with sugars, syrups or honey. We also craved a fresh ending to our evening, and indulged in a visually stunning selection of exotic fruits on a platter that combined dragon fruit, rambutan, mangosteen and more, served on ice. However, the star of the dessert has to be 8's signature melted vanilla ice cream with hot chocolate sauce. A show in itself, our waitress emerged with a chocolate globe and a jug of steaming chocolate sauce. As she poured the hot chocolate onto the globe, it suddenly implodes to reveal vanilla-bean infused ice cream at its centre, while the plate turns into a gorgeous, decadent chocolate-vanilla swirl. It's no doubt that 8 is one of Egypt's, if not the region's, finest restaurants and it's no surprise it holds a steady five-star rating on Tripadvisor. Yes, it's pricey and best reserved for special ocassion, but every time we eat a meal as good as this is a special occasion to us.