Between the pasta station, the zalabya maker, and the wel3a men in Aladdin pants, iftar at Four Seasons Cairo at the First Residence's La Gourmandise was definitely a memorable experience. 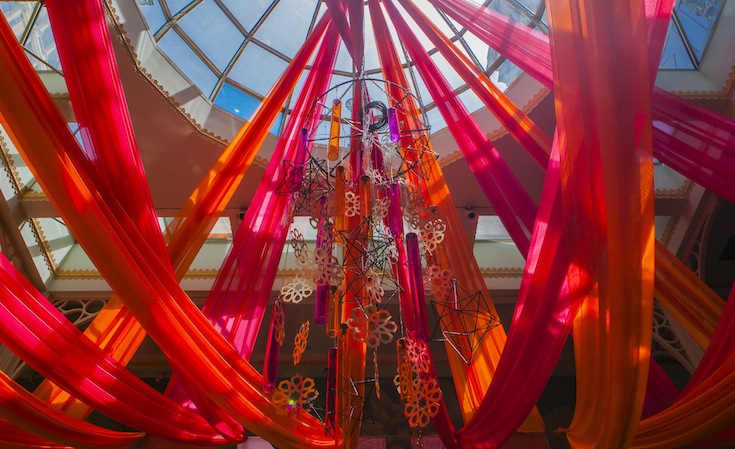 Ramadan – with all its bells, whistles, and intricacies – comes down to one thing: experience. From the actual fasting and prayers to the cultural elements of Ramadan – the decorations, the traditions, and the many meals shared – it's all about the shared experience that we cherish year in and year out. Even Egyptians living abroad come back for Ramadan; we question them a little bit this year, though, what with the heat waves and all. So, heading out to La Gourmandise's Ramadan tent for Iftar the other day, we were curious what kind of experience to expect.

Strolling into the Four Seasons Cairo at the First Residence, we found ourselves hanging a left and heading into the First Mall, admittedly feeling rather stupid for not having walked in that way to begin with. The following series of thoughts and exchanges happened in the 30 seconds between walking through the door and reaching our destination: First Mall? But we're looking for La Gourmandise tent! Ah, sa7, that’s the one that’s set up inside the mall; that's right. Wait, we're going to an indoor Ramadan tent? That's going to be so –– holy crap, that's gorgeous! Led from the entrance to our seats, one of our writers – and we won't expose who – nearly fell flat on their face because they were walking while staring up at the bright decor that wove together streams of orange, salmon, pink, and the shades in between. Remember what we were saying about the experience? La Gourmandise, tucked away inside the fanciness of a mall, was transformed into a lavish canopy bursting with colours and the essence of the month's festivities. Seated strategically close to one of the dessert tables – they know us too well – it took some conscious effort to get up and explore the savoury sections first. We're not so good with decisions though, nor with resisting food, so 'exploring' the savoury sections meant heading back and forth to the table with plates piled high; we'd make amazing waiters. You can't blame us, though; the tables were overflowing with options for every taste. Shawerma sandwiches, various types of meats and vegetables, potatoes and rice… and that's just a sample of plate one.

Heading back to the buffet one more time, we discovered the men that would soon become some of our best friends for the night. We mean the men behind the pasta and zalabya stations. With sauce options, pasta options, and a rather large spread of topping options, the pasta station was a slice of savoury heaven. Watching him put together all the elements of our pastas with such ease and the most graceful flick of the wrist was a subtle reminder of our own culinary inabilities – a reminder we gladly ate away a few minutes later. Stuffed to the point of exploding belt buckles, we faced the moment of truth: will we have room for dessert? Well, that's a stupid question. Mustering up every ounce of energy left against the impending food coma, we made a beeline for the dessert tables. This time, we had a strategy. One person went for the Oriental dessert table - konafa and zalabya and 2atayef and all things dipped in honey. Another person went to the gateaux table - éclairs, mille feuille, and all sorts of chocolate gateaux. And of course we're all grateful for the guy who went to the fruit table and grabbed apricots, plums, apples, and peaches. After this much food, most respectable people would drag themselves out the door and be done with it. But, respectable people? Us? 3eib. Instead, we went ahead with all sorts of tea and coffee, and some sheesha so we can ne7bes after far too many rounds at the buffet. Adding to the overall Arabian experiences, the lovely wel3a men came out dressed in attire à la Aladdin, which topped up an overall experience that was admittedly unexpected. It’s not so much about where you are – whether in a mall, at an elegant dining venue, or somewhere on the streets of Korba – Ramadan comes down to the experience, and quite the experience it was.