Japanese brunch at InterContinental Cairo Citystars' Shogun may start at 1PM but you'll never notice if you sleep in long enough. Skot Thayer got out from under his Star Wars sheets early enough to enjoy some culinary wizardry at the Asian restaurant this weekend. 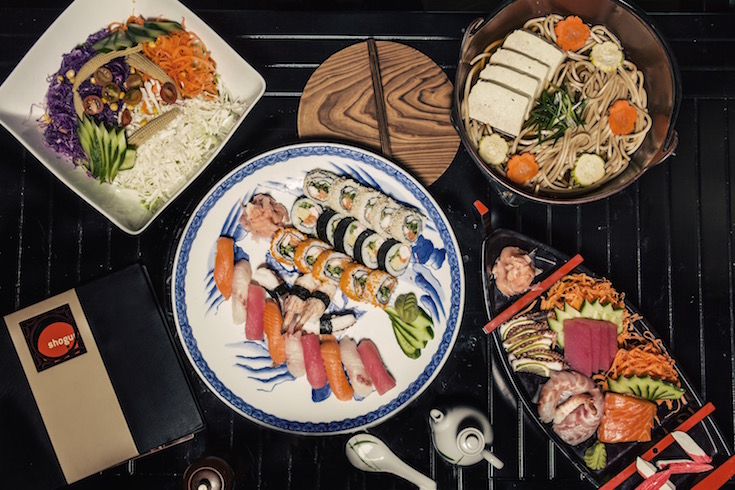 Brunch was invented by the Japanese Super-Shogun Oda Nobunaga during his quest to unite the disparate warring states during the Great Pocket Monster Wars of the late 16th century. He and his men would stay up so late on their GameBoys that by the time they woke up in the morning, it was far too late to eat anything and still call it breakfast. So Mr. Nobunaga, Pokemon master and basis for the factual television series DragonBall Z, decreed that a new meal be created just for his brave and noble soldiers. Choosing the name ‘brunch’, which translates roughly to ‘the gentle wind that carries a dandelion seed over mountains and streams directly into your mouth at around 1 or 2 in the afternoon’ he had his cooks create a buffet the likes of which the isolated archipelago had never seen. Sushi was obviously on hand as well as Japanese BBQ and dumplings. All the men that dare mock him for his inability to use chopsticks and requests for a regular fork and spoon were summarily executed. Thus, the tradition was born. The Shogun restaurant at the InterContinental Cairo Citystars is about as authentic an experience you can get in the city. Crossing the faux bamboo bridge over a babbling brook and rounding the corner into the dining room fills your senses with the smells, sights and sound of an experience straight out of Tokyo. The elegant ambiance of the decor, complete with a gigantic fish tank full of what I assume are future nigiri rolls, harmoniously overlaps with the clatter and chaos of the lightning quick sushi-makers (sushi-teers? sushizers?) and the precisely frantic hibachi chef as he slices, dices, and flips veggies and proteins. With all the varieties of most excellent Japanese cuisine, buffet is clearly the way to go. Perusing a menu and trying to narrow down options has often led to screaming and tears among the CairoScene crew. With a buffet, most of that is abated until someone tries to nab the last dumpling or California roll and all hell breaks loose.

If you have a favorite food from the land of the rising sun than chances are you can find it among the steaming wooden bowls and flaming skillets. And if you don’t have a favourite yet, this setup gives you the opportunity to tear yourself apart on the inside, arguing with yourself whether the spicy fried chicken or buttery scallops shall reign supreme. Now I don’t pretend to know much but if there’s one thing I’ve learned with this Fancypants bit, it’s brunches. Though it’s more of a regular lunch by 1PM, maybe the fact that it’s on Saturday makes it a brunch. Regardless, the totally bonkers variety of food on show at Shogun’s brunch makes it one of the top-notch spots to lazily stroll into after a night of nutrient deprivation.