Sheraton just got a little brighter and a whole lot yummier; have you seen the Joy Cupcakes bike wandering around selling cupcakes and Nutella pops? 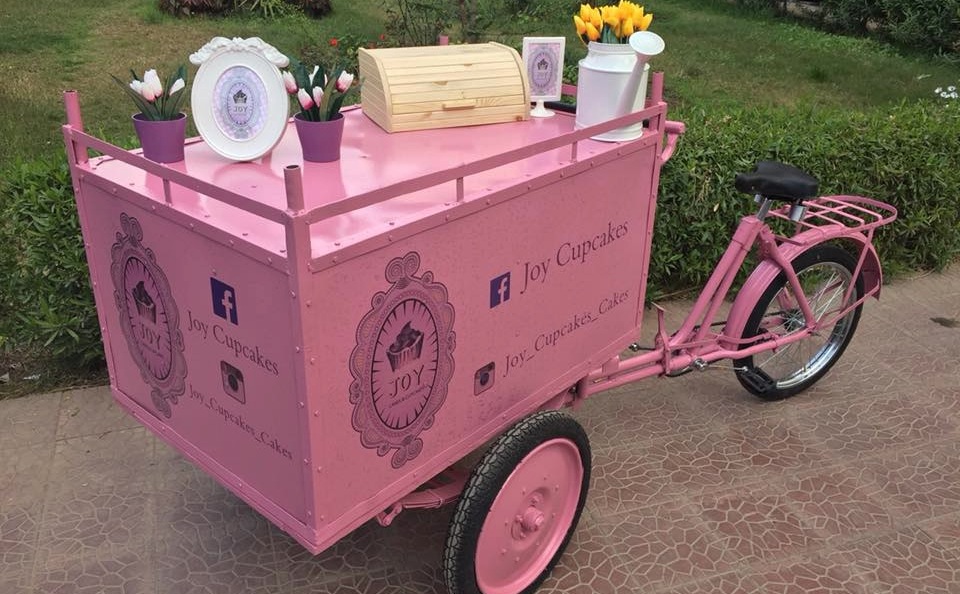 When someone says 'street food' in Cairo, it usually prompts images of a bunch of men crowding around a small carriage selling foul, soggo2, or even mokh (brain) sandwiches in the middle of the street. Though enjoyed by many, some of us are not big on brain juice early morning.

Mina and Gina Raafat – the two siblings behind Joy Cupcakes – are working to change this general image of street food in Egypt by adding cute little desserts to the mix. These two have been roaming the streets of Cairo with their adorable bright pink food bike, laced with flowers and the smell of freshly baked cupcakes, éclairs, Nutella pops, and more, luring Sheraton inhabitants to the sweet side. Thirty-year-old Mina, who used to work in the human resources field in Dubai, tells us that living there was not financially sustainable so he decided he wanted to go back to Egypt and open a little project there. Gina, who used to sell delicious homemade dessert via Facebook, then teamed up with her brother to create this sweet little project that has been spreading good vibes along the streets of Masaken Sheraton.

“The first time we went down the street with Joy Cupcakes, we were actually welcomed by the friendly curiosity of people and their happiness with our desserts. We felt supported and encouraged by people, and a lot of those whom we assumed would not be very open to the idea actually approached us and bought from us,” Mina says. Of course, no one is safe from the perils of people who choose to post nasty things on the Internet – particularly Facebook. But this doesn't phase the dessert duo. “I actually hope the project will continue to spread widely, as people seem to really love our products; plus, the idea of the food bike is almost completely new to Egypt,” he says.

Well, we're not sure why anyone would be opposed to a roaming dessert bike, but it looks like we'll be frequenting the Sheraton area far more often.

For more information, you can check out their Facebook page.