Ocean Basket Is A Dream Come True For Seafood Lovers

Newly opened restaurant Ocean Basket in Courtyard Maadi is all about the fish. And the prawns. And the mussels. Oh, and the sushi! We ventured over to the seafood spot for a veritable feast in underwater delicacies... 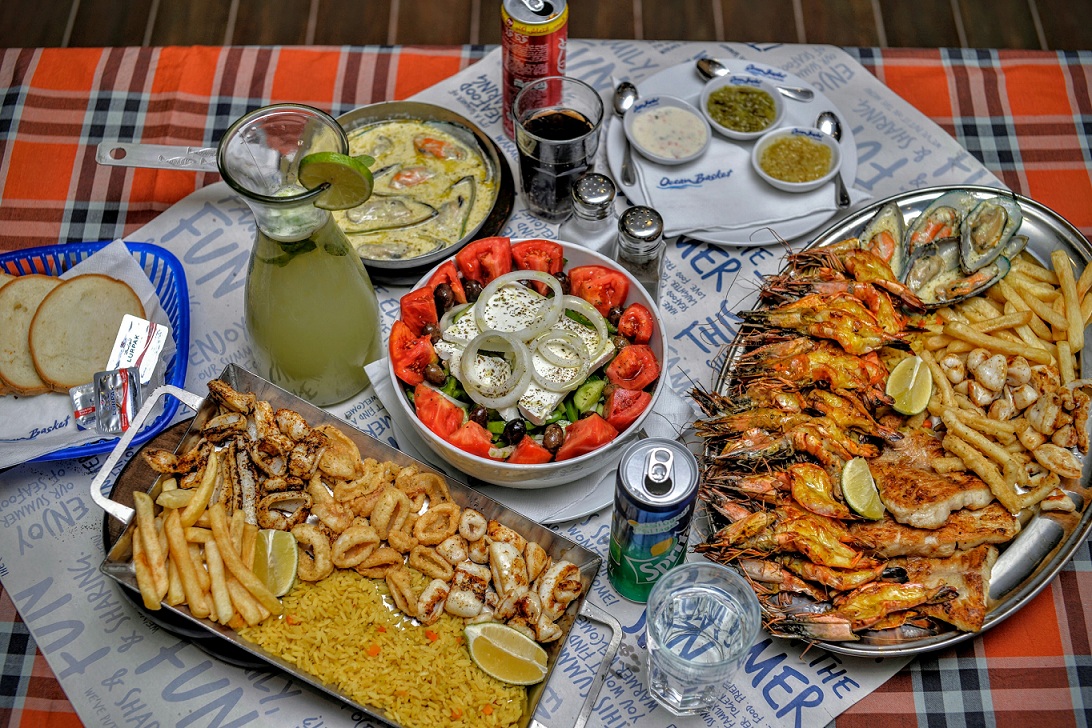 South African seafood chain Ocean Basket just opened up at The Courtyard in Maadi so naturally we made our way up there to test out what we've heard is basically marine magic. Since ’95 when a guy named Fats opened up a seafood restaurant that sought to make seafood available to people besides the bourgeois, Ocean Basket has been on a quest for world domination. With 195 stores open on three continents they’re well on their way to a world in which the sun never sets on an Ocean Basket restaurant. The Maadi location joins the first massively successful spot in Alexandria as a place where Egyptians can get a cost effective seafood experience. They do their best to support the local economy too, sourcing what they can locally. Even the things they can’t get here are imported by Egyptian companies. You know that one friend or relative you have that doesn’t eat seafood? Like at all? Don’t bring them to Ocean Basket. Ocean Basket doesn’t serve a damn thing that didn’t come from the sea. You won’t see any chicken fingers, or burgers at this place. Completely uncompromising, they laugh in the face of picky eaters who say “ew” at the sight crustaceans and squid parts.
I, for one, appreciate this tremendously. Too often restaurant chains stretch themselves thin trying to cater to the lowest common denominator. Attempting to be a place of compromise that seafood lovers can bring non-pescetarians, other chains have descended into mediocrity. A crappy burger and a chewy lobster win no converts.
The one thing Ocean Basket does is seafood but that does not in any way mean that you have limited options. For our meal we covered a wide range of pelagic cuisine: sushi, blackened shrimp, mussels, “feesh” and chips.
Let’s start with the sushi. We got the Two Way Platter which came with salmon roses, tempura prawn rolls, rainbow rolls and fried crab California rolls. For a South African place these guys have an excellent working relationship with the Japanese. Each piece was distinct and delicious. Our party actually almost came to blows over who got to eat the last California Roll. Then came the Starboard Platter with prince prawns, calamari, mussels and the catch of the day which, I believe was a Pangasius, served with french fries, or I guess you’d call them chips in this situation. This massive dish was a perfect proselytization piece for those unconvinced of the delicacies of the sea. As one of the aforementioned picky eaters myself I was converted wholly after just a few bites from each part of the platter. The fish just fell away from itself with the slightest provocation from a fork and melted in your mouth like butter.
The calamari came in three varieties, blackened, grilled, and fried. Each with its own qualities but the Cajun style was so good I actually ended up looking at plane tickets to New Orleans. The mussels, though I am not accustomed to working to remove a bit of food from its place of rest into my mouth, were superb in both texture and taste.
Suffice it to say that if you’re looking for seafood in Cairo, Ocean Basket in The Courtyard is a tremendous value for the money and serves every conceivable seafood item you could want. And they all taste great!
You can check out Courtyard Maadi's Facebook page here or follow them on Instagram @courtyardmaadi.
Photography by Ahmed Najeeb for CairoScene.