Niveen Ghoneim meets the veiled fashion designer who has dressed the likes of Queen Rania, to talk skinny jeans, Hind Rostom, and redefining our beauty and fashion standards one gown at a time. 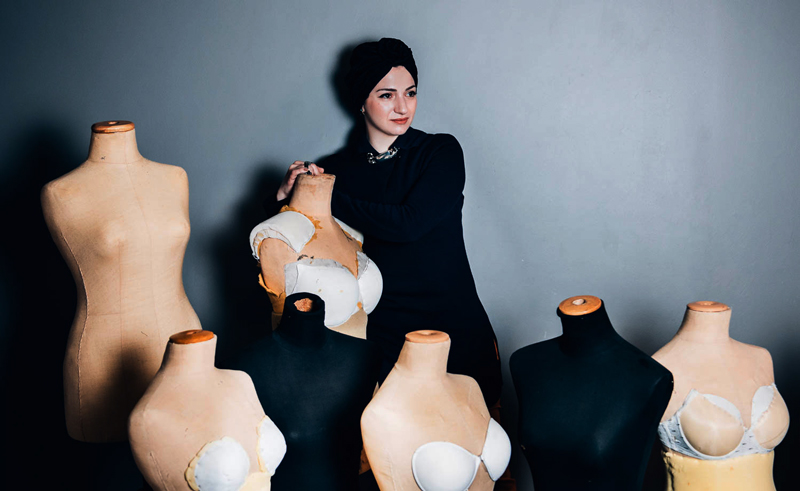 According to a 2007 New York Times story, 90% of Egypt’s Muslim women wear the veil; some choose to cover their hair and necks and dress modestly, some shroud all evidence of their physical existence underneath black cloaks. The Islamic dress is seldom associated with elegance; when was the last time you took the subway in Cairo and weren’t visually assaulted by the Carinas and the unsightly, kitsch, voluminous multi-layered hijabs? I had always blamed the sartorial tradition for this style nightmare – and this is coming from someone who until very recently thought it was ‘Tony’ Hilfiger and whose most prized possession is a pair of Steve Madden boots – until I met Palestinian fashion designer Heba Edris.

The Kuwaiti born artist could draw before she could even speak. “I never really played as a kid would. When I turned three, I would spend my days designing and making dresses for my Barbie dolls,” she says. She had her first taste of fashion star treatment in school; “My classmates would see my sketches and ask to buy my designs - I didn’t even know you could sell them - and they’d have tailors make them.” As with all great people, she didn’t have her life all figured out by the time she was sixteen; it took a brief stint at Cairo University Agriculture School, followed by another spell at the faculty of Fine Arts to study Graphics. It was during that time of academic trepidation that she signed up for Studio El Fan – a Lebanese talent show that launched the careers of Elissa, Haifa Wehbe, Nawal El Zoghbi, Jean-Marie Riachi, Majida El Roumi, Zuhair Murad and many more of the Middle East’s biggest names – in the category of fashion design and earned a Bronze medal. Armed with her first ever industry title, she enrolled in Burgo Fashion Institute and actively pursued a career as an uncompromising fashion designer. Fast forward to 2016, and she has been doing it for fourteen years; releasing one collection after another, opening her own atelier Heba Edris Haute Couture and dressing the likes of Queen Rania Al Abdullah of Jordan and HH Sheikha Mozah of Qatar.

Like many Muslim women, Heba Edris wears her veil proudly, the only difference being her own personal authenticity. “The veil became prevalent in the 90s because a lot of women wanted to cover up - or because some girls couldn’t be bothered to comb their hair during exams,” she jokes. “When I wore the veil that wasn’t the reason; in the culture we were brought up in, it was all about decency, not just covering your hair and that’s it. It’s not just a piece of cloth. It’s about being decent in everything and acting in a way that doesn’t make people around you wonder where you grew up.” It is this remarkable sense of self that catapulted her into fame.

While veiled women constitute most of Edris’ clientele, hijab couture doesn’t begin to sum up her art. “I work with non-veiled women too. I can do sexy, but not trashy, have you ever seen Nicole Kidman looking trashy-sexy on the red carpet? My job is to make a woman look chic and sharp, and I like to keep the focus on a woman’s personality rather than her body,” she muses. “A lot of women think that showing too much skin is the only way they can look nice!”

In a world where a woman is defined by her weight and measurements and literally bullied into swapping her dinner for J.Lo’s exercise routine, it is truly refreshing to see a fashion designer discard the industry’s patriarchal, not to mention surgically enhanced, beauty standards. Instead of playing by the rules, Edris wrote her very own playbook, setting her own standards of beauty and style from the very beginning. The terms ‘inner beauty’ and ‘fashion’ are almost incongruous, but to Edris, they go hand and hand. “Beauty is not about your face. I believe we were all born with good-looking faces; women shouldn’t want to look like Haifa Wehbe, Nancy Ajram, Elissa, and Kim Kardashian, because each woman is beautiful in her own unique way, look, and style,” she says. “The work I do for my clients is inspired by their humanity. My job is to dress a woman as herself, but in my own way; she has to follow her own style and she has to feel like herself.” She may come off as a hippie minimalist, but as with all visionaries, there is no pigeonholing her. “I like regality in my work; I like my women to appear royal and I always like to dress them like queens,” she tells me.

Like her favourite designers Zac Posen and John Galliano, her meticulousness knows no bounds. “I do more sculpture than embroidery because I like to make designs that bring out a woman’s femininity but that have other dimensions as well. I also like to mix materials so as to make something unique,” she says. “Tailors are the first architects known to man, our work is based on science just as much as art. We work with moving bodies that are often asymmetric; there are certain equations that I have to take into consideration when designing.”

Just because Dolce & Gabbana just released a luxury hijab and abaya collection doesn’t necessarily mean the fashion industry is becoming more Muslim friendly, far from it. Over the past decades, the multibillion dollar business has gone out of its way to alienate large swaths of women by designing outerwear specifically designed to fit certain body types and mentalities. Our style crisis has but one reason, according to Edris; “A lot of women who aren’t even Muslim still don’t like skin-tight clothes and showing too much skin; those people have a right to find what they want to wear. These women have often not been targeted by the trends in the fashion industry. I am all for freedom of artistic expression, my problem is that you can’t just force everyone to dress the same. Skinny jeans, for instance, don’t work for all women and figures but unfortunately they don’t have any other options on the market. Fashion needs to address everyone; short, tall, big women,” Edris explains.

The industry needs to make amends, but we as women of all races and faiths need to reconnect with our own identities and values, we need to embrace our bodies for what they are. "Veiled women need to stop buying revealing clothes and covering them up, they need to stop following this fashion zeitgeist that doesn't suit their body types, their diets and their values," she concludes.

Muslim women’s declining sartorial culture is a reflection of decades of ugly politics and its even uglier social ramifications; we have descended into ghastly squalor and cultural degeneration. So where do we go from here? The answer lies in Heba Edris’ media repertoire; she relies on Umm Kulthum’s lofty voice and Fairouz’ ethereal sound, on Faten Hamama’s grace and Hind Rostom’s smoldering magnetism for inspiration. "We have a rich cultural legacy to build a fashion renaissance on; I listen to Umm Kulthum, Fairouz and AbdulWahab when I work, it inspires me," she reveals. "Even movies, golden age cinema has a profound influence on me, the style, the grace; Shadia had a flawed body but you could never tell because she dressed so sharply, so elegantly. Hind Rostom was alluring but never vulgar. Faten Hamama, ya Allah!" she enthuses. "One of my favourite cinéfashion moments from that time is from La Anam [an old Egyptian movie] when Mariam Fakhruddeen's character was wearing this stunning black dress at a party, and when they asked her where she got it, she said 'I did it myself!' Ladies back in the day had to learn how to sew to express themselves," Edris reminisces.

Lauren Bacall was a sex symbol because she could convey all her moxie, all her talent and all her badassery with a pose, a dress and a look. Umm Kulthum was famously modest and that didn’t prevent her from becoming a style icon and turning the music industry upside down with people like Bob Dylan and Bono citing her as an influence. Same goes for Edith Piaf whose style continues to inspire women and designers the world over. The message behind Heba Edris’ art is clear and simple: modishness isn’t about how much or how little skin you show; it is about who you are as a person and how you choose to express it. 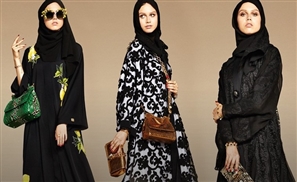 Whether you crave couture, like the laidback look or are just looking for an [...] 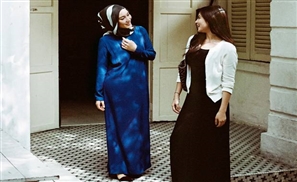