Valentina Primo meets the team behind Appsinnovate - the very same team that brought the iconic Toktok Drift to our phones - and discusses the future of the gaming industry and its developers in Egypt.... 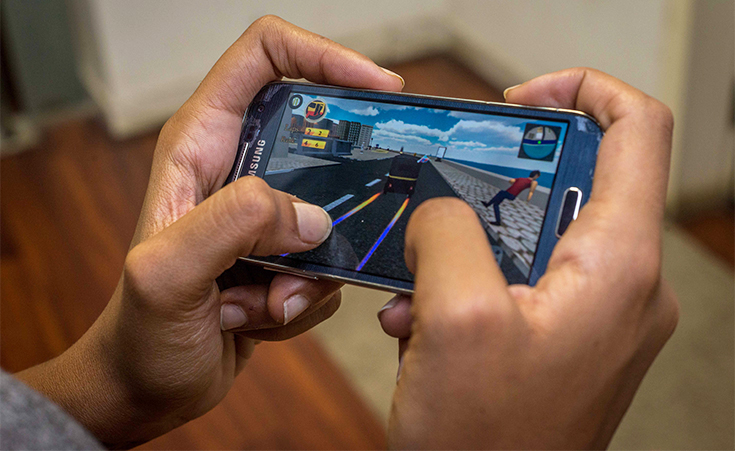 “Games are still seen as something only for kids, and it is very difficult to explain to the general public the fact that game-development is in fact a very important industry, with huge prospects of growth,” says Mohamed Azmy. His offspring Appsinnovate is a software development startup that has steadily climbed the ladder of tech entrepreneurship, releasing mobile games that have been making waves not only in Egypt, but also abroad.

Together with his co-founders Hany El-Akel and Kareem Abdullatif, Azmy released Toktok Drift, a mobile game popular with over 200,000 users which has been racking up awards since its inception in 2014, including the fifth place position at the Samsung Entaleq's 2014 edition and reaching the finals at the ArabNet Battle of the Games competition, as well the Mobily Developers Award 2014.

As their second brainchild, Blops, hits big in Japan, where a crowd of followers download their iOS and Android versions every day, they gear up to release their third game called Nightmare Attack, a project which pushed the team to “stretch our development skills to new horizons,” as Azmy says.

But growing a game-development startup in a region where the tech sector is at an incipient stage was not a piece of cake for the young entrepreneurs. “One of the biggest obstacles for game development in Egypt is the absence of expertise. There had been, and still are, some initiatives to challenge the status quo and become active members in the game development world, yet the outcome still remains modest,” he explains. “Many entrepreneurs end up as doing contracted work for studios abroad, and even that is very limited. The end-result is that any new beginner in this field really has to exert a lot of effort and time to learn and resolve the technical issues facing him or her.”

Born in 2011, the startup aimed at developing an industry previously overlooked; but the absence of a broad market and a limited gaming community posed some additional challenges to the young entrepreneurs. “In other countries, the local community supports home-grown talents and nurture them until they mature. But in our case, copyrights are not strictly protected and the public is not used to paying for entertainment in general, especially for games. This leaves us to the only available opportunity and that is to compete internationally, where the odds are not always in our favour,” Azmy says, although he visualises hope in the rise of investors for the near future.

Despite having gone through the bumpy road of a nascent startup ecosystem, several Egyptian newbies have blossomed with fruitful game apps. Take the case of Puppy-in Bubble, a Information Technology Institute (ITI) graduation project which managed to take home the third place prize at the World Games Competition of the Microsoft Imagine Cup 2014.

There are other promising ventures to be released this year, such as Ugly Pirates, one of the three winners of the ITI Egypt Game Jam in 2015 (part of the Global Game Jam event), or 1001 Ropes, another ITI graduation project that is expected to become a real Egyptian hit. Expectations are also high for the release of ARK Survival Evolved, a game developed in collaboration with entities from abroad; and Athorus which, having been able to secure a deal with an international publisher, has released sneak peeks that promise not to disappoint the enthusiasts.

“There is a clear market gap that could be exploited,” Azmy says, drawing an analogy with the entertainment industry. “Yes, Hollywood movies and TV shows are great, yet we do also appreciate a good Egyptian production. Likewise, when it comes to games. We do enjoy the blockbusters, nevertheless, we would also love to see games that are derived from our culture as well. The Egyptian, Arabian and African cultures are extremely rich, with a lot of historical interactions with other cultures, out of which creative ideas could emerge. In addition, as Egypt is the leader in the creative movie and TV productions; we can leverage on this and assume leadership in the games development segment. We are looking forward to the day when Egyptian movies will be premiered with an associated game alongside them,” he explains.

Beyond gaming apps, Appsinnovate also develops business solutions and mobile apps, with a portfolio that comprises both business-to-business and business-to-consumer products. Among their clients include international corporations such Nestle, Coca-Cola, and JWT, with international presence in Lebanon, UAE, KSA and Spain. “Our aspirations for Appsinnovate are high, on the technology level as well as on the competitive level,” he adds, as he reveals the company’s participation at the Mobile World Congress in Barcelona in 2015.

In the meantime, the company is representing Egypt in the regional Microsoft Imagine Cup Competition. “The competition has a very interesting theme, in that the player must keep playing to accumulate knowledge and experience to be able to pass a challenge,” he says.