El Wafeyat: The Automation of the Death Business

Niveen Ghoneim sits down with the young entrepreneurs behind El Wafeyat, an online obituary service, who are teaming up with Misr El Kheir this Mother's Day to uniquely honour deceased mothers. 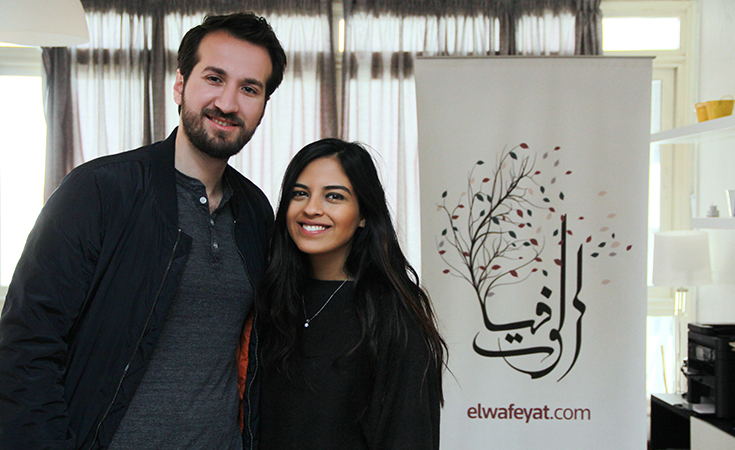 Over the years, people have managed to reconcile economy to our whimsical nature and, whether we like it or not, this purely financial and practical discipline has come to shape our human experience. Perhaps nothing better captures our human complexity than our intrinsic dread of our own inevitable mortality and our ability to remain sane while grieving the death of a loved one. As with everything in life, people can always muster the good sense to move forward and compartmentalise their existence amid the emotional upheaval.

Meet the happily married couple whose entrepreneurial sense and ingenuity have taken them to the depths of our complex human nature: the death business. Like warlords, arm dealers, and the GOP, Nesma El Far and Yussif El Sammaa benefit from people’s deaths - the only difference is that the duo does humanity a service rather than a disservice. ElWafeyat.com, a website that publishes obituaries, is their brainchild. “The idea came to me three years ago; I was with a friend and his uncle passed away, and we had to go through the process here. You don’t have service providers to help you with anything, you have to do everything yourself in this difficult time, and you have to pay a lot for each service,” Chief Executive Officer and Co-Founder Yussif El Sammaa says. The world can be a cruel and unforgiving place, but people’s indolence is most understandable in times of grief; if you can’t mope around at home when you have just lost a loved one to the Grim Reaper, when can you? El Sammaa and El Far built a business model around this morbid reality; from the comfort of your bathrobe, you can announce the death online, send your condolences to the family of the deceased, and have the obituary published in El Ahram – one of Egypt’s oldest and most widely circulated newspapers. “It's the 21st century, and everything is digital; you do have people posting on Facebook and Whatsapp whenever there is a death, but it’s too informal and you don’t always see it on time, and it doesn’t always have all the information you need,” El Sammaa tells us. “Why publish an obituary in the local newspaper for $1000, when our service only costs a fraction of the price?” Co-Founder and Marketing Manager Nesma El Far asks, rhetorically. Death will always be dreadful and melancholic, but nothing comes close to the loss of a mother - this is one wound that time cannot heal. No matter how much you try to play responsible adult, you will always catch yourself longing for the comfort and warmth that come from the mere thought of her, especially on Mother’s Day, when you no longer have anyone to shower with presents. Another service El Wafeyat provides – in partnership with Misr El Kheir Foundation – is the possibility of honouring the deceased by installing a charity project in their memory as a Sadaqa Garia (the Islamic concept of an ongoing charity/good deed). Even more interesting is the abundance of funding options available; “you could either donate the whole amount required online, you could have it collected by a Misr El Kheir representative, or you could crowdfund it through our online platform,” El Far explains. The rise of capitalism and the subsequent domination of corporate culture epitomise the world’s often insensitive pragmatism by which a colleague’s death can be announced by a medium as demeaning as a mass e-mail. Instead of being remembered for the people they were, their memory ends up an unread e-mail in your inbox. In an attempt to introduce a modicum of dignity into the process, Al Wafeyat extends its services to corporations. “We are still in the early stages of this project, but we are trying to create networks within the company based on departments, branches, and so on, because people end up getting bombarded with e-mails to the point where they don’t even care anymore,” El Far says. “HR departments notify us whenever there is a death and we announce it to the concerned parties so they can send their condolences through our platform, and even assist the family of the deceased in getting the word out,” El Sammaa elaborates. Death is a heart-wrenching and macabre reality of life, but it is part of it nonetheless. How does it feel to be professionally involved in something so morbid? “It is morbid and sad, but you really help people during the hardest time,” El Far says, contently. And, come to think of it, if a politician can condemn millions of people to death with a phone call, why can’t a grief-stricken daughter announce the death of her mother between bursts of tears from her bedroom? And what good is being a startup nation if our entrepreneurs cannot cater to people's basic human needs at their most vulnerable moments?