“For the First Time, I Smelled Death.” A Firsthand Account of the Maspero Massacre

On the five-year anniversary of the incidents that continue to shake him to his core, Egyptian activist Ahmed Fares recalls his near-death experiences during the Maspero Massacre and how that day has forever impacted him. 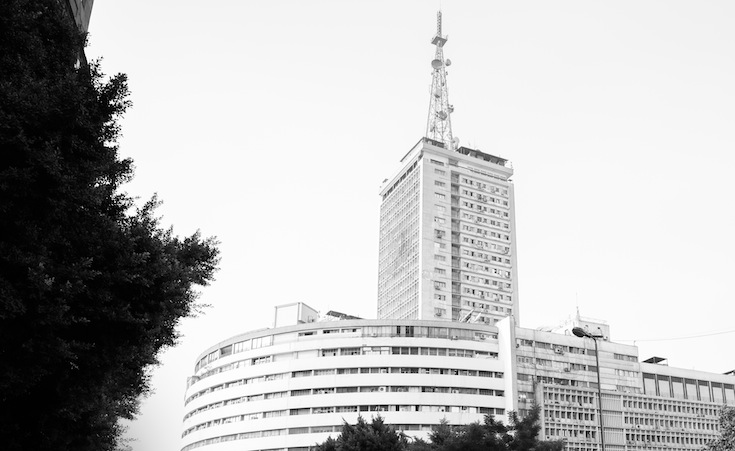 “When you have a clear enemy, it’s easy; you know what you’re afraid of. But when you’re walking through the streets and it’s almost a civil war, you don’t know who’s going to kill you. You’re afraid that anyone’s going to ask you about your religion because you don’t know what the right answer is. If I say I’m Muslim, he could be Christian and kill me; if I say I’m Christian, he could be Muslim and kill me. There’s no right answer – any answer could kill you,” Ahmed Fares recalls, his eyes wide and bursting with such raw expression for which I know words will never do justice. “It felt like a horror movie. That day, I lived through a real horror movie in Egypt.”

Fares’ chilling recollection of the Maspero Massacre on October 9, 2011 – a now-infamous staged demonstration at the Maspero television building that resulted in 28 brutal deaths and 212 injuries – has me gripping the edge of my seat; silent, fighting back tears. After hearing from a friend that the army was slaughtering people at a Christian protest, Fares insisted on going to see for himself. “At that time, everything we heard from the media wasn’t necessarily the truth. Everyone showed us the truth through their own lens, so we always went to see for ourselves,” he recalls. The momentum of the revolution was still there, but no one had expected this to happen. “It’s impossible,” Fares repeats, as though still trying to grasp it all. “It wouldn’t have crossed anyone’s mind – no matter how dark its corners – that this could happen. It felt like betrayal. For someone to decide that the right thing to do is kill ordinary people – premeditated, intentional death – this didn’t cross my mind, not even in my worst nightmares.”

Realising he’s getting a tad ahead of himself, Fares pauses for a moment, then continues: “The news emerged around 7 PM, so I met with my friend Amr and, by 8 PM, we went to the area surrounding Ramses Hilton.That was the closest we could get – beyond that, the army had cordoned things off. On our way there, an Egyptian news anchor had gone on air and said that Christians were killing the army soldiers and urged the people to go protect them. When we arrived, we saw people dressed in a way that was undoubtedly Muslim – long white galaleeb, soft weapons, beards, sticks, swords. There was ta3asob (extremism) in the air. You could touch it. You could see it in the anger in their eyes, in the way they spoke – ‘The Christians are killing the soldiers! They trampled the Quran! They…’ It was unreal.”

Fares, Amr, and their friend made one mistake – they started asking questions, thinking it impossible that the Christians did something like this. “We found ourselves surrounded by people suddenly asking us what our names are and if we’re Muslim – ‘Who are you? Who sent you our way?’ – they thought we might be Christian; they were trying to classify us,” Fares remembers, his voice rising. “Up until that point I thought swords were a thing of the past, but someone stood there holding his sword up against my chest – not just tapping it or trying to scare me with it, no, he was fully hitting my chest with the flat edge of his sword. He was suspecting that I might be Christian, so if anything convinced him I was, he could turn his sword around and it’d be the end of me. There was no reasoning with them; I’d be dead.” The boys’ saving grace was their ID cards, which someone had to inspect for the crowd to let up, after which they were hit and shoved away. Walking away from the crowd and toward a nearby fence, police officers ran after them, directly firing pressurised gas bombs and rubber bullets at them. “At that point, Amr and I had started pulling out our phones and recording, so they started targeting us directly. This was the second time we might’ve gotten killed that day – first by swords at the hands of the crowd of people; the second at the hands of police officers,” Fares narrates. “We were taking a dimly lit video at the time, and all you hear is me yelling in the background: ‘Amr! Amr! They’re going to fire at us! They’re going to fire at us right now, Amr!’ And they did fire directly at us – one pressurised gas bomb hit the fence and the other landed at our feet. ‘They fired at us, Amr! Run Amr! Run!’ So we’re running and the phone camera is shaking – that’s the scenario I vividly remember.”

To be chased by officers is one thing, as Fares recalls, but what do you make of it when you find people in plainclothes bolting after you? “We ran through the alleys and the streets until we couldn’t find each other anymore. We weren’t surrounded by officers – those were behind us – but there were regular people walking down the street who would suddenly bolt after you. It was crazy; people had died, we were going to die twice, and then people were running after us and we had no idea who they were. As we ran through alleys, people would see us being chased and would join the masses in running after us. We didn’t do anything! All we did was go down to see what was happening and suddenly people were running after us and we didn’t know why!” Fares recalls, exasperated, his questions unanswered five years after the fact.

“When we were in the alleys, we weren’t sure if the people we were passing were Muslim or Christian – all we knew was that they were going to chase us. Most of the people that were going to kill us that day were ordinary people. They weren’t officers, they weren’t felool, they weren’t ikhwan – regular people. Religious people going out to defend their religion from the Christians who ‘trampled the Quran’. The thing is, I can’t blame anyone for anything they did. These people aren’t mentally sound, but they’re ghalaba. It’s wrong! But I can’t entirely blame the person for his wrongdoing. It felt like I was schizophrenic; I'm running from someone who's about to kill me and I  genuinely can’t determine if he's a good person or a bad person,” Fares continues in growing exasperation.

“I felt like I was responsible for what happened, because most of the people who were killed were killed in the name of religion – the religion I abide by."

“I felt guilty,” he admits in a lowered voice. “I felt like I was responsible for what happened, because most of the people who were killed were killed in the name of religion – the religion I abide by. I feel responsible for this. The people who did this, I – in one way or another – am associated with them. I feel like it’s my wrong for not stopping it – for allowing it to happen. People with whom I share a religion decided to kill other people just because they’re associated with another religion. I understand that people say 'these people don’t represent Islam,' but I thought, 'if you represent Islam, why didn’t you stop them?' Yet I couldn’t stop these people from their wrongdoing – I feel crippled in doing so because I was going to get killed. I was walking through the streets in tears, like someone walking through judgment day – seeing people fighting here and people running after each other there, people killing each other. And I’m walking through the middle of it all, in tears, unable to stop anyone from doing anything.” “I met my friend Ahmed by coincidence; we were both in tears and started walking down Ramses Street without any direction or intention. The whole road…” Fares pauses, trying to recall the scenario. “I can’t believe this happened in front of me in real life. It’s a movie. It has to be a movie.” After brief moments of regaining his composure, he continues: “The way to the Coptic Hospital was lined with officers and regular people. Someone with a beard and a white galabeya was walking down the street – he seemed poor; his beard was like a broom and his galabeya torn and tattered – and he was holding a huge stick, followed by a bunch of teenagers. He chanted, and they chanted along – ‘Masr hatefdal Islameya (Egypt will remain Islamic)’! A bit further ahead, I heard people cursing Christians and saying they killed the poor soldiers; meanwhile, people walked by the officers while openly bearing arms. It was absurd chaos. Betrayal.”

"If they die I’ll die with them. If I can’t stop this, at least my fate is theirs."

“We reached the Coptic Hospital around 10 or 11 PM; the army had the hospital surrounded from every angle, though we don’t know why. The logic is that they’re trying to protect the people, but they had also just been killing them. Are they protecting them or surrounding them to kill them off?” he questions. “I thought that, if the army is going to kill them off, I have to be inside. I’m not going to do anything, but if they die I’ll die with them. If I can’t stop this, at least my fate is theirs, whether good or bad. When God asks me what I did for these people, what will I say? I walked away from them? I’ll say I couldn’t do anything, so I joined them; whether they die or they live, I’ll be among them – at least I wouldn’t run away.” “As Ahmed and I walked in, the scenario inside was strange. People had already come in and some were consoling others. From the entrance and all the way inside, there were remnants of blood everywhere,” he says.

After a brief pause, he says, “I smelled death. For the first time in my life, I smelled death.” It’s at this moment that something in me breaks. “I fell to the floor and started crying,” he goes on. “As we went in to donate blood, I sympathised with the doctor. He respectfully declined our offer, saying they didn’t need blood and that people had already died. But what I saw in his eyes was, ‘you’re Muslim, you’re one of the reasons this happened’, and I can’t blame him. We really were a reason. The Christians in there, when they find out you’re Muslim, they don’t know whether to hate you or throw themselves into your arms and cry. What I saw left me unable to stop crying – the type of crying where you don’t know where it comes from or how to make it stop. Now I’m the one who needed consoling." What Fares cannot grasp, though, is this reality: “This happened in Egypt. At the hands of Egyptians. An Egyptian killed an Egyptian in Egypt.”

“It would’ve terrified me less if I had seen that Muslims were the only killers that day, but what I saw is that all parties were killers that day. There’s not one party that would’ve refrained from this. If the situation were reversed and Christians were the majority, with the same Egyptian mentality we all hold now, the same thing would’ve happened. I was afraid to die at the hands of either party,” he thinks aloud. “Egyptians are ready to die for anything when it comes to religion, regardless of their faith – if they’re atheist they’ll still die for it!”