What would make three young Egyptians leave possible careers in sexy fields like fashion or… banking? Only to sell ice? 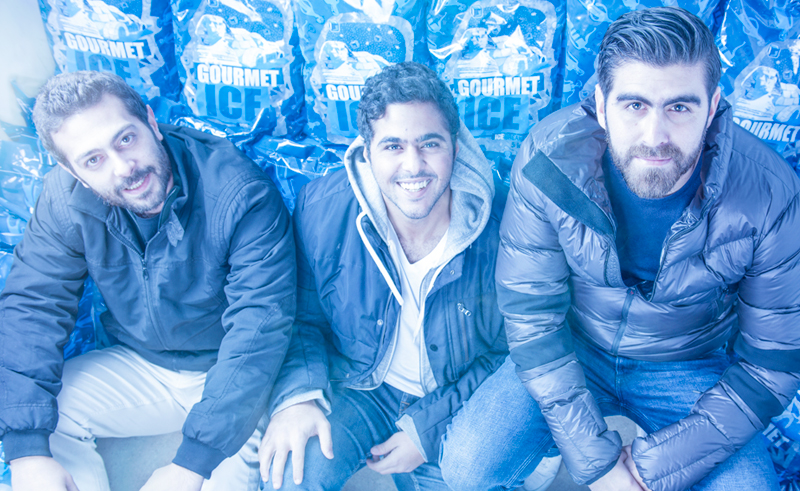 Yes, banking is sexy. Bankers see more money on a daily basis than most humans see in a lifetime. That is sexy.

In contrast, going into the business of selling ice… not so much. It’s frozen water. You take water. Freeze it. Then sell it. No one is throwing their panties at these guys any time soon. But you have to admit, it’s a solid (pun intended) business model. It’s simple, sell frozen water. Right? I find out it's not.

I’d seen these blue bags labeled “Gourmet Ice” in supermarkets for some time now. And while I’m not exactly Mr Party, on occasion, I’ll invite people over because i’m too lazy to go out clubbing - ice’s natural habitat. So I’d venture out and pay the ungodly amount for a bag of frozen water so my friends have a visual reference of the context of their outing. We’re about to get social. And recently, gourmet ice bags have caught my attention. And not because I’m cheap, and these bags have the closest price to what frozen water should, but because I immediately caught myself wondering about immigration to Canada. I thought I no longer want to live in a country where “gourmet ice” exists. In Canada, all ice is created equal. That’s the place for me.

I came back from my visions of embassy queues and thought: Just like someone made this ice gourmet, someone else made me a writer. You got to love Egypt’s opportunities. “I’m going to use my clout as writer prince of the interwebs to get to the bottom of this. I’m going to return to CairoScene’s investigative journalism glory.”

Soon, I was on my way to Sakkara to meet Moustafa Mousa, Bourhan Rateb (who actually looks like Gameel Rateb), and Karim Hamama (looks nothing like Fatin Hamama). The trio own and operate the Ice-Breaker ice factory, AKA the dudes behind Gourmet Ice.

‘We saw a gap in the market,” tells me Mousa. “Our backgrounds include the food & beverage and hotel industries. Karim saw how much was being spent on ice and immediately saw a massive opportunity,” he continues. That makes sense. It’s supply and demand. I’d learned about that in some economy class. You see an opportunity and you jump right in. But that’s the tip of the iceberg for their story. Rateb and Mousa had been friends for a while and when Karim told them about the amounts establishments are spending on ice, it was a no-brainer. This was back in 2015. But this wasn’t an idea out of thin air. The reason their factory and our sit down were in Sakkara was the fact that out there, where the air is cleaner and nature rules just a little more, was because that’s where their secret weapon was. “Moustafa’s father had wanted to start working in bottled water. He had the infrastructure and licensing ready to start production,” says Rateb. With a deep well in Sakkara as a source, the three set out to go into business. But that doesn’t explain where the gourmet bit comes in. Sure, it was an incredibly sanitary facility. Hair nets and face-masks for all and everything. But a part of me was waiting for an overweight Italian to burst in at any moment with white gloves and silverware to have me try out samples. Alas, he didn’t come. So slyly I ask them, “how is it gourmet ice?” I’m met with a chuckle by the three partners. “There are few aspects to this. This isn’t a marketing gimmick,” Tells me Mousa. The entrepreneurs go into the details of their filtration process. All 18 stages of it. Was this an evasive smoke and mirrors tactic to avoid the answer? How have they figured out my aversion to science? Finally, when they noticed that my eyes had glazed over, I was given the simple answer: “The cubes are shaped like top hats! How much more gourmet can they be?” This isn’t just a fancy shape. The thimble cube (actually dubbed the gourmet Supercube around the world), is a bit of an engineering feat. It’s officially the ice shape with the slowest melting rate there is; something beneficial when considering where we live. And it’s no wonder that Icebreaker’s first bag was sold in Sahel. After all, who wants a bunch of ice melting into their drink on a hot summer day on the beach? Something I’m assured in the case of Icebreaker won’t change the taste of my beverage. Mousa explains to me that while other ice makers simply freeze their water, part of the reason theirs is gourmet, besides the slow melt-rate, is the fact that the water is stripped of its minerals altogether. “This is why our ice is crystal-clear when it freezes,” he adds. It’s this unique shape that keeps the ice cubes from melting into each other in the bag on the way home. When re-frozen, you won’t end up with a big lump of ice that you have to smash into walls to break apart. The thimble allows you to crack the pieces apart swiftly and re-use whenever. What happens when Egyptian millennials start a venture is that we focus on the user experience and learn from the mistakes of those before us. From actually knowing the source of the water and not relying on aging government pipes, to the actual packaging. Moustafa Mousa, Bourhan Rateb, and Karim Hamama have the end user in mind at every stage of production. The business of ice in Egypt is no longer a monopoly. And as a new player in it, Icebreaker seem intent on standing out and impressing their customers. “Our bags are heat-sealed. You know for a fact that your hands will be the first in the bag every time,” they tell me. These bags are created FOR the user. They stand upright on their own. They have a handle for easy carrying. And they have a zip-lock seal. “Ice is always part of a social experience,” says Mousa. The trio tell me about how you need big bags of ice when you’re partying or when you’re around a lot of people. That’s how the name was born. “Every party needs an ice-breaker and we want to be at the heart of every party,” he adds. So they went about and chose branding for their futuristic bags that matches their agenda, a name that’s cheeky, and a slogan that gets you talking about it: Gourmet Ice.

Water is the source of all life. And as Icebreaker’s purified and frozen version is making its way to markets around Cairo and even the rest of country, the partners are thinking of expanding even further. With flexible delivery times to late night clubs and special pricing for the food and beverage industry, they make the perfect partner. But their plans for expansion go even beyond the ice business. They plan to take full advantage of their well by growing ‘super foods’ and even bottling drinks with them; another gap in the Egyptian market. I remember when Brussels sprouts and even mushrooms were only an import.

On the way back from Sakkara, and as I approached the city on the cusp of a weekend, I thought that as tempting as it is to throw a party with my freebie bag of gourmet ice, I should perhaps not. Maybe I’ll have an early morning instead. I should sit and think of the opportunities around me and how I can take advantage of them. These guys were my age and they’re, from behind the scenes at least, changing the way their contemporaries socialise while at once elevating the F&B ecosystem and creating jobs. And I’m creating a Facebook group to invite my friends over.