From CBC Egypt’s Entrepreneurial TV show, to the MITEF Pan Arab Competition and now entering Flat6Labs, Sami Al Ahmad has been making waves in the entrepreneurial world. Since he moved to Cairo in 2012, the Syrian entrepreneur has helped over 70,000 students access education, in Egypt and abroad. 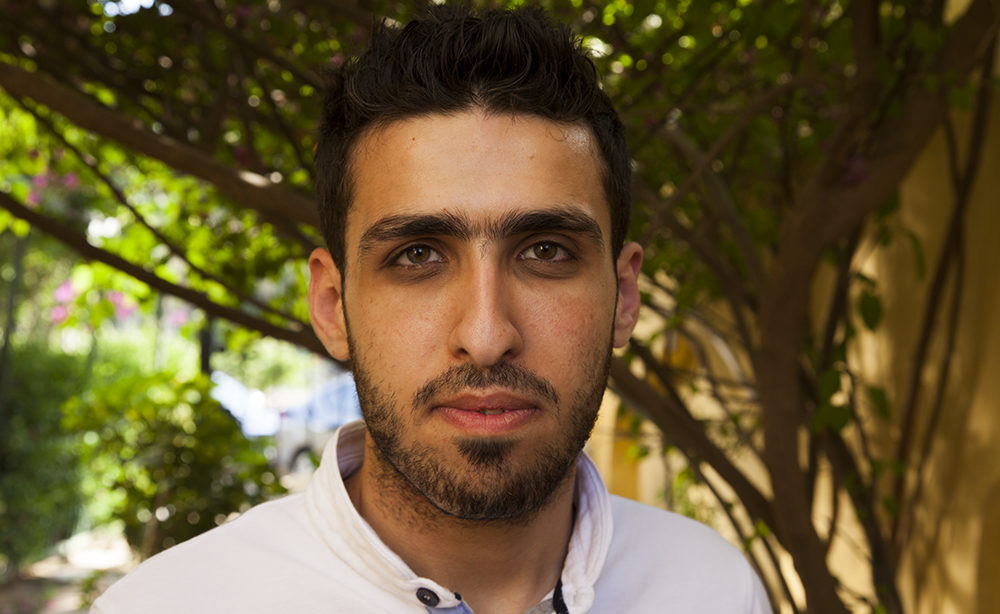 We’re sitting in his office right across Hossary square, the epicentre of Little Damascus, a neighbourhood in Cairo’s satellite city of 6 of October known for having become home to thousand of Syrian refugees. On top of his desk, a site plate reads “Dr. Sami Al Ahmad,”proudly reaffirming the degree that the 25-year-old dentist, originally from Damascus, struggled so hard to obtain.

“My first mission in Egypt was to continue my studies,” says the young entrepreneur, who, like many Syrian youngsters, was the first in his family to leave his home country, feeling the tortuous reality of war in Syria. "I was searching for universities to continue my studies, and I didn’t know who to ask or what to do. Most of the doors were closed for me. I was terrified; I would end up without a country, without a home, without a university; I felt I had nothing left,” he recalls.

Soon, he realised his struggled was shared by many. So he set off to create a platform to streamline the process for Syrian students to continue their studies in Egypt, and offer training sessions to help them enter the job market. “Once I was registered and back on track, I felt it was my duty to help others who were in the same situation,” he says. In four years since its inception, his network, Khatwa, has helped around 75 percent of Syrian university students based in Egypt – a demographic group surpasses 20,000 - and won the third place at the US-based Jusoor Entrepreneurship Competition in 2014, with an initial investment of $15,000. "To be honest I didn’t even know what the meaning of a 'startup' was, but I had an idea, and I wanted to create something that fully depended on our work," says Ahmad, as he sits in a café in Cairo's Little Damascus.

Having kick-started with a small investment from his family, the network charges students a $500 fee for processing their university registration, while offering free consultancy to help refugees do the process themselves. “I remember the first month around 1,000 students were talking to me and at this moment I said: ‘ok this is real’,” he recalls four years later. And it was those years of unwavering struggle against bureaucracy, discrimination, and an intimate understanding of diaspora that led Sami on a path to create a second startup: Marj3.

“Year after year, we realised the problem was bigger than refugees; it was actually about the quality of education,”he says. "A lot of Egyptians, Tunisians, and people from all over the MENA have the same problem, and they are searching for scholarships and opportunities abroad. So I called two web developers and told them ‘I have an idea, let’s talk.’At that time, both of them were trying to get a scholarship to study in the USA.”

Founded in July 2016, the platform not only lists all scholarships for Arab students, country by country, but also offers consultancy services for students to successfully apply. In nine months since its inception, it garnered 70,000 active members, and took Al Ahmad on a journey through entrepreneurship competitions that saw him reach the semifinals at the world renowned MIT Enterprise Forum Pan Arab Entrepreneurship Competition, speak at TEDx Azhar University in 2016, become an Ashoka Changemakers fellow, and get shortlisted by none other than Facebook in its Messenger Bots Challenge 2017. This year, the entrepreneur took a bigger leap, entering the Flat6Labs Cairo acceleration programme. "I feel it’s my duty to help the next generation; this a huge problem; it's bigger than war," says the 25-year-old.

While his network Khatwa was a social business and provided all information at no charge, his new offspring spins off the non-profit model to that creates revenue off the online consultations his team performs. "Last month we made more than 70 consultancy sessions through our platform and out of those people 40 percent of them succeeded and moved on to the next interview of the scholarship,” says the entrepreneur, as he looks through the window from his office in Little Damascus, where empty desks and classrooms await the return of the students the next morning.

“I didn’t set it up as an NGO because I don’t want to depend on others; how can I tell students to depend on themselves while I am depending on donations? That doesn’t make sense at all,” he stresses. Despite he was unaware of the Egyptian startup ecosystem - and the existence of startups altogether - the young entrepreneur persisted in pursuing a vision that would see his counterparts access the education they long to continue.

However, one concern remains at the core of his EdTech incursion: saving Syria’s lost generation. “I think it’s a huge risk that more than two million children are left without education, whether inside or outside Syria. That means an entire generation will grow without education, skills or experience; how can they rebuild their country then? I feel it’s my duty to help the next generation; this a huge problem; it's bigger than war.”

Knowing the Syrian community in Egypt like few others, Al Ahmad has witnessed the arrival of thousands of refugees - as well as their struggle and pursuit to make Egypt their home. "We are now working on improving Khatwa to help them, step-by-step, become active members of the society. Our main mission is to transform people who need help to people who provide that help,” he says.

But behind and beyond Al Ahmad's change-making efforts, there lies a relentless entrepreneurial spirit, a drive that has not only given way to two impact-driven startups, but also sparked the wider pursuit of someone on a mission to leave a mark. "I don’t want to be a regular citizen; I want to focus on the problems in society and solve them; I want to study abroad and go back to my country to bring all that knowledge and improve the quality of education. That’s my dream,” he says.  Today, he sees part of this dream come true, he admits. "I remember when I came here, four years ago, there was no one to help me get on with my studies. Now you can ask like hundreds of students and they will tell you 'you can go to the Khatwa website and follow the steps 1,2,3. That makes me happy."

Find out more about his startup, Marj3, here.

Shot and edited by: Martin Roux.