If you, like us, like to spot with a view, then this listicle should delight and inspire you to explore some of Cairo's most fascinating panoramas of the city. 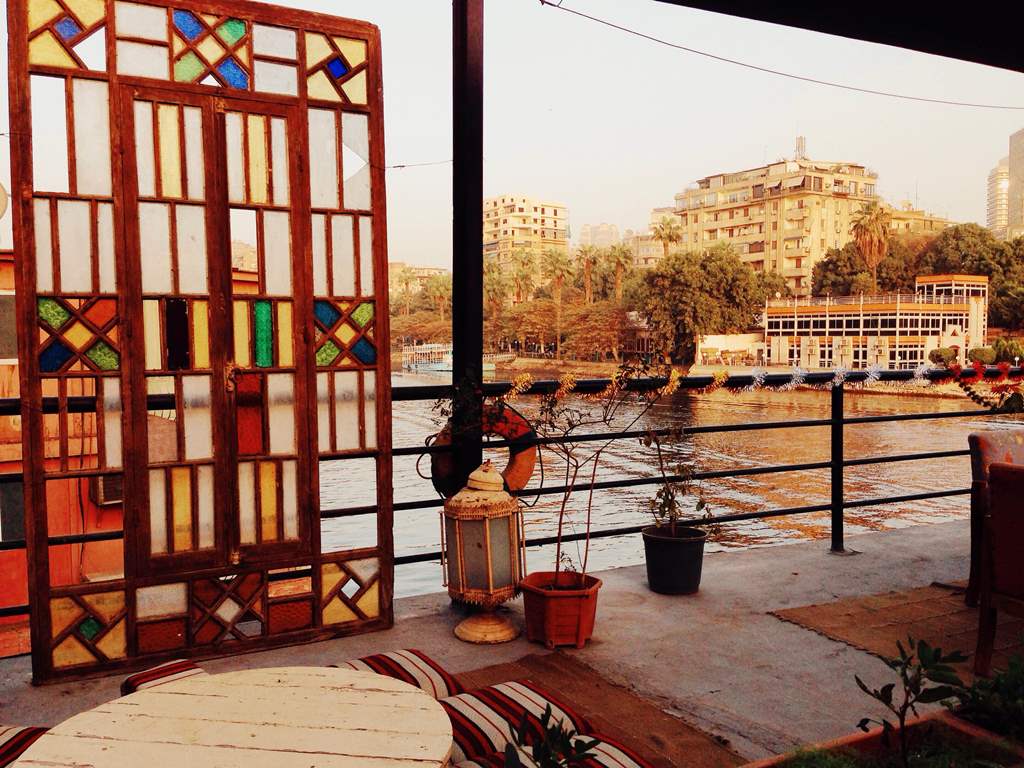 As it seems most people prefer Instagram to their own eyes, we've compiled the spots based on people's own pictures of them. It's like the tree falling in the woods proverb... if no one is around to double-tap, does it really exist? Depends on your thoughts on quantum physics and light as waves or particles. Nonetheless, here's some pretty pictures done by some pretty people...

Obviously. Nasser's last erection is 187 metres tall and up untill 1971 was the tallest building in Africa. On the 62nd floor is a viewing tower with panoramic views of Cairo, and just below is a revolving restaurant where you can have a refreshing mango cocktail and maybe some kofta while enjoying a bird's eye view.

Whilst many of the spots on this list will have stunning views of the Nile, the Nile 49 restaurant-cum-concept-store-cum-boutique a3da is actually smack bam in the Nile on the outskirts of Imbaba.

Windows on the World

The semi-circular venue on top of the Ramses Hilion with breath-taking views of the city offering a sweeping landscape of Cairo's bridges and landmarks.

The recently refurbished branch is situated in front of The Great Pyramids of Giza. Have kebab and kofta with Khufu, Khafre and Menkaure.

We still can't get over this breathtaking view! From our latest, {Arabian Delight}.🌙✨ Thank you @hanaelbadrawy for this beautiful shot. #BordureEvents #ArabianDelight #ModernityMeetsTradition #FlashbackFriday #SunsetMadness

Formerly an ancient Egyptian quarry site for limestone, used in the construction of temples and pyramids, Mokattam Mountain plays host to one of the most natural and unobstructed views of Cairo.

Watching the last light over Cairo from the top of Mokattam Mountain just east of the city. If you look closely you can see the pyramids in the far right. Photo by Christina Rizk @christinarizk #egypt #cairo #christinarizk #mokattam #mountain #everydayeverywhere #everydaycairo #everydaymiddleeast #everydayegypt #المقطم #القاهرة #مصر #everydayafrica

The only railway bridge across the Nile is a favourite for photoshoots due to its unique view and complex industrial formation.

"Only those who will risk going too far can possibly find out how far one can go." - T.S. Eliot

Undoubtedly one of Egypt's most scenic green spaces, the views make it seem that Cairo isn't a sepia toned, smog filled metropolis but a garden of dreams and unicorns with the citadel looming in the distance.

Once you get past the fact that there are but a handful of fish in the Fish Gardens, and they're either dead, dying or fossilised, climb to the top of the surreal grotto caves and get one hell of a picturesque composition of Zamalek and beyond.

Have a swim with Khufu, Khafre and Menkaure.

So this is gonna be my view from my bedroom this weekend. #lemeridien #cairo #egypt #nofilter

The legendary Pyramid side hotel has played host to the worlds biggest stars and diplomats and it's easy to see why. Their recently launched 139 Lounge overlooks the Pyramids' sound and light show during dinner.

My kind of meeting @menahousehotel

A fine dining establishment in the heart of Garden City with 360 degree, unobstructed views of the Nile and beyond.

Set to open up this month in the pool area of Four Seasons Hotel Cairo at Nile Plaza, restaurant and bar Upper Deck, baring some sort of apocolyptic event or natural disaster, has views just like this.

When we have nothing else to talk about we take pictures of the view. People often think we must be high when we publish certain articles. We are... literally.