Chronicle of a Walking Tour into Downtown Cairo’s History

One Friday autumn morning, we decided to dive into Egypt’s urban legends as we joined Ismaelia’s walking D-Tour of Downtown Cairo. From Art-Deco icons to the historical cinema that hosted Bassem Youssef’s show, Valentina Primo unveils the stories woven by the area’s stimulating streets. 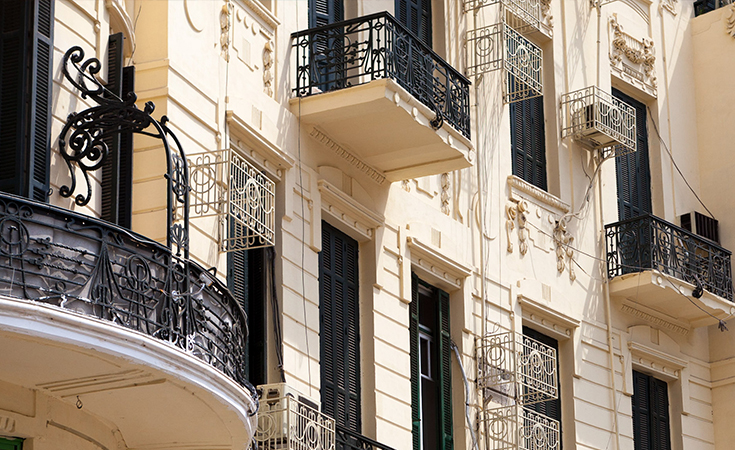 We are standing at the foot of a building set in a crossroad where amber French-style villas craft an ambiance that could deceive us into believing we aren't in Egypt. We could be in Paris; we could also be in Madrid, but the statue at the center of the square exudes Arab iconography and suddenly brings our minds back to Cairo. We are at the epicenter of Talat Harb Square, and we are about to embark on Al Ismaelia's guided walking tour of Downtown. The statue of Talaat Harb, the economist who founded the first Egyptian bank, reigns over the French-style square.

Revamped, repainted, and reinventing urban legends for the travelling minds, the buildings in downtown Cairo have been renewed by Al Ismaelia Real Estate and Investment, somehow reflecting a spirit of revival that reigns the area. We start off at Café Groppi, an icon of art-deco architecture in the victorious city. Built in 1924, the chocolatier’s imbricate mosaics and curving façade came to replace what previously was the villa of Ali Basha Mubarak.

The surrounding area was the residential and cultural heart of downtown Cairo. All around us, early 20th century villas and family palaces bear witness to Cairo’s golden age, when families such as Sednaoui would rest in their luscious private gardens, which were later replaced by apartment buildings.

By the end of the road, symbolic and unforgettable, Tahrir Square sparks a renewed flare. The square was formerly known as Khedive Ismail Square, in honour of the ruler who gave Cairo a Parisian flavour in the 1860s, through the work of talents such as Baron Haussman, known for giving Paris its modern configuration. As we walk past Café Riche, we move on to the Automobile Club, an originally neo-Islamic design by Italian architect Gaston Rossi which was remodeled in 2002, when its façade was replaced with a Neo-Classical flavour. The imbricate decorations at Café Groppi, an icon of art-deco architecture in Egypt.

It’s Friday morning and the sun paints a mild light over these now amber buildings. As we stand in front of the old Palace of Said Halim, we are taken aback by a 1920 Art-Deco exemplary whose iron door deliciously blends geometric patterns with pharaonic symbols such as the zig-zag and the lotus flower. The mixture of Neo-Baroque, Art-Deco, and Islamic symbols mixed with the tranquil pace of a Friday morning walk feels like strolling across an open-air museum, only interrupted by the whistle of bread sellers’ bicycles.

The sun begins to itch as we reach Abdin Street, the cultural hub where cinemas and cafés used to stand. We approach the art-deco icon Radio Cinema, designed by Italian architect Gaston Rossi in the 1930s. An exact replica of New York’s Radio City Music Hall, the impactful studio cinema used to host Bassem Youssef’s popular Al Bernameg show, and Abla Fahita. We enter the cinema and it feels like a trip back in time. As the echo of our guide’s voice reverberates through the room, 800 red velvet chairs silently stand around a stage framed by golden art deco lamps. It’s almost midday and the Qur'an reverberates from the mosque, announcing the call to prayer as an Armenian church stands by its side. Between the buildings, a blossoming tree filled with orange flowers stands as a beautiful metaphor. Outside, the church walls bear witness to the revolution, colouring the sidewalk with striking graffiti.

We enter the Armenian Catholic church, the religious epicenter of one of the three major Christian communities in Egypt, along with the Italian and Greek communities. Since 1952, the Armenian community has established itself as the largest group. Modest and decorated with astounding colourful stained glass, the church was built in 1926 by Garovalian. The story of its building is as beautiful as metaphorical: an Orthodox Christan, Garovalian built this Catholic Church for the community, even though he himself attended an Orthodox church, built in turn by a Catholic architect. The mixture of neo-baroque, art-deco, and Islamic symbols combined with the tranquil pace of the tour feels like strolling across an open-air museum.

We reach the Stock Exchange Building, a Neo-Classical example whose large columns reflect the Greco-Roman influence. The center of economic activity, the Borsa was closed between 1984 and 1994. Its renewal turned the surrounding street into a pedestrian haven, dotted with colourful chairs and shisha pipes under the shelter of palm trees, at cafes which became popular after the 25th of January uprising, drawing students and businessmen alike. Once we enter the building, the beautifully painted dome crowning its ceiling catches our eye.

A few steps away on Alawi Street, we bump into a Neo-Islamic gem designed by Antonio Lasciac, who crafted a collage with Mamlouk decorations where European balconies perch. Now belonging to the Central Bank, the building was the headquarters of the Italian insurance company Assicurazioni Generali di Trieste, a name which we can still see engraved on the wall. The streets around the Stock Exchange have become a pedestrian haven since the 2011 uprising.

We walk past the colossal Shorbagui building, a 7-floor Gothic jewel whose dark walls contrast the surrounding amber constructions, and stop at the Sha’ar Hashamayim Synagogue on Adly Pasha Street, another symbol of Egypt’s history of coexistence. Designed by Edouard Matasek, the building’s Art Nouveau style stands out. As we begin to get hungry, we look across the street and spot the beautifully decorated restaurant Aish and Malh.

As we stop for lunch, we meet Mr. Dongol, the tireless guardian of the Kodak building now being repaired. A green galabeya perches on his small, slim body, and a woolly striped hat frames his sparkling eyes. As he sits with a firm grip on his stick, next to a scaffolding on a wooden chair, and quickly strikes up conversation with us. He tells us he is 95, he speaks five languages, and for some reason, doesn't stop saying a made up word, "mangareya" every few sentences. His gracious expressions and timid smile are the beautiful end of a morning full of stimuli.