Partying? On a Wednesday? Dalia Awad goes against every urge in her body and has some mid-week musical enlightenment as DJ Hassan Abo Allam and DJ Dinka take the Dancestock reins. 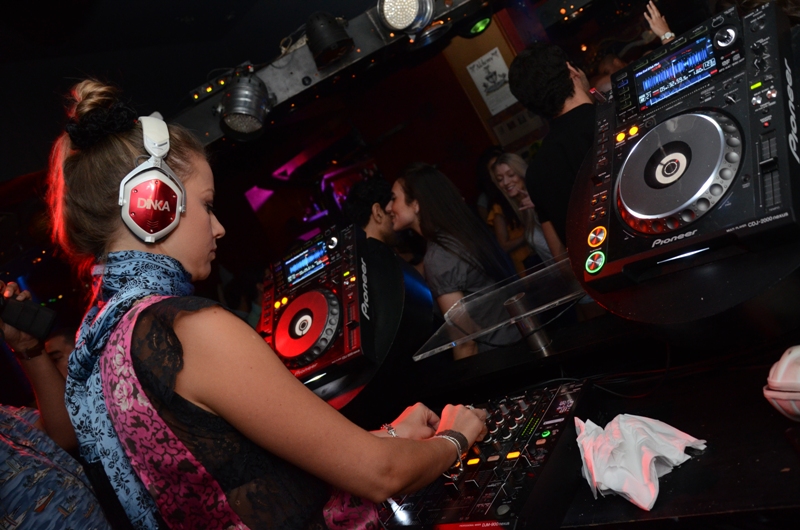 I'll be honest. I'm getting old. Gone are the days of pulling all-nighters, partying til dawn and bouncing back the next day, fresh and ready to do it all over again. Hell, I usually can't get past midnight on a weekend, let alone go out on a work day. So, when I was invited to Cairo Jazz Club ON A WEDNESDAY, I had my reservations to say the least. Dancestock's second edition this year promised up-and-coming Egyptian talent in the form of DJ Hassan Abo Allam and DJ Dinka flying in especially from Switzerland. Especially. I decided I wouldn't let Dinka down, grabbed a few friends and drove down to everyone's favourite club.

It's funny how music can transform a place; CJC was almost unrecognisible when we walked in, with DJ Hassan Abo Allam in full-swing. I was told it was Tech House but, for those of you who are like me and don't really know what that means, I'll describe in actual words: everyone was chilled, as deep bass reverberated around the place, with energetic melodies and the odd vocal forced you to get into the music. Strangely, this relaxed but excited vibe was excellently complimented by the on-the-house strawberry mojitos that kept appearing in front of me. I guess it's because strawberries are relaxing and mint is exciting, but it could be because I hadn't had a good drink in ages.

As the dance floor filled up, the music got a lot more energetic and I found myself bouncing away in the little corner my friends and I declared ours for the night. The pace picked up and the music turned into that kind that makes you feel like you're going to explode if you don't relieve the pressure by dancing your ass off. I'm told it's called Progressive House and that was only the tip of the iceberg. In Europe, you see, DJ Dinka is known as the Queen of Progressive House and Abo Allam was only preparing us for the aural journey that was to come.

The anticipation was certainly building and by 10PM, every time I turned around to talk to someone, I'd be met with the same question: "WHERE THE HELL IS DINKA?" I'd promised my friends a kick-ass blonde from Switzerland and they were beginning to get antsy. We'd dance our way over to the decks every few minutes, looking for the bombshell. Then I hear: "DINKAAAAAAAAAAAAAA!" from a certain Cairo gossip... She had arrived at the turntables, finally! I pushed my way to the front of the dance floor only to find that she hadn't begun playing yet. A little disappointed, but still dancing, I gave her a look as if to say, "Ummm, do you know what time it is?" which she obviously ignored. As the beats built up, DJ Hassan Abo Allam didn't look like he was going anywhere. Then something amazing happened. Right in front of my eyes (camera), at the peak of the track being played, Dinka practically pushed Allam off the decks, snatched the headphones and took her position at the throne. It turns out she did know what time it was and, better yet, she knows that timing is everything:

Taking the reins, DJ Dinka proved her music royalty and, importantly, proved to me why there needs to be so many sub-genres of House. Progressive was what was promised and progression is exactly what happened. Mixing and matching her tracks in a way that I subconsciously knew what dance move to throw next, she certainly took us on a rollercoaster ride, from uplifting highs to heart-pumping lows. Needless to say, I didn't get to work on time today but I did find out that partying on a week day can be pretty damn fun. That's progressive, right?

Find out who'll be playing next week's Dancestock here.