Iranian football players will now face a compulsory gender test after a string of supposedly-female players turned out to be men... 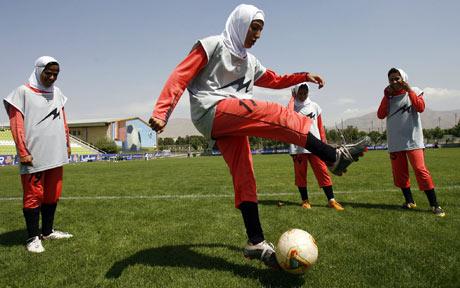 Iran's female football stars are set to undergo mandatory gender tests after a string of the country's top female players were found to be men. The shocking revelation comes after four national side players turned out to be either men who had not completed sex change operations, or were suffering from sexual development disorders.The country's football governing body is now carrying out random checks in an effort to tackle the problem.

Medical examiners will turn up unannounced at training sessions of teams playing in Iran's women's premier league, as well as those playing in the indoor league, known as Footsal. Seven players have already had their contracts terminated under the federation's gender test directive. Head of the Iranian Football Federation's medical committee, Ahmad Hashemian said the clubs themselves were now obliged to carry out checks before signing them fresh player contracts. Players unable to prove their gender face automatic disqualified from the womens' league.

He said: "If these people can solve their problems through surgery and be in a position to receive the necessary medical qualifications, they will then be able to participate in [women's] football." Gender change operations are legal in Iran according to a fatwa - or religious ruling - pronounced by the late Ayatollah Ruhollah Khomeini, spiritual leader of the 1979 Islamic revolution. Sex changes are commonly carried out in phases in Iran, with the full procedure taking up to two years and including hormone therapy, before the full gender transformation is completed.