We talk to the founders of Reform Studio - the unique local furniture brand stocked at the cute and kitsch Dokan Boutique - about how they're changing lives and saving the environment one chair at a time... 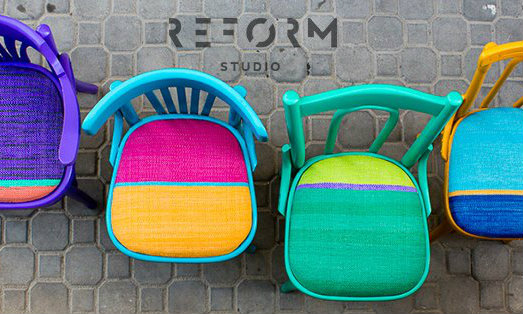 We're the first to admit we're a wasteful bunch. A blatant disregard for the environment plagues many an Egyptian, and we can't even exempt ourselves from this. 'Go green' isn’t exactly a term we quite understand or acknowledge; our nation is based on the firm belief that everything goes out the car window, regardless of its size or contents…We could go on and on but you get the picture.

Turns out though, there are some people out there who actually give a damn about the environment and are doing something which helps it while simultaneously creating seriously funky furniture. We discovered Reform Studio courtesy of their exclusive collection at one of our favourite boutiques of all things cute, colourful, and kitsch, Dokan, where they’ve designed an entire range of brightly-hued furniture that also happens to be environmentally friendly! What the girls over at Reform do is essentially take discarded plastic bags and weave them into wicked patterns to create fabric! The end result is some adorable chairs and stools, that stand alone as statement furniture pieces, but if you look closely, you can see the remnants of the plastic bags woven into the material. Pretty neat, huh? We do love ourselves some upcycling.

The story behind the brand, founded by Mariam Hazem and Hend Riad, traces back to university. Now, for our graduation projects, we were desperately scrambling to piece together a crappy paper so we wouldn’t flunk out and have to repeat our final semester, but these two decided that they wanted to contribute to solving the trash problem in Egypt as their project for the last semester of uni, where they studied design. They settled on plastic bags because, as Hazem told us, "they're the second most wasted material in Egypt and it takes a thousand years for a plastic bag to degrade." So they thought they'd do a little good and a little design work in tandem by collecting bags and using them to create fabric for furniture. "We thought we'd solve this problem of wasted plastic bags by reusing them – which is even better than recycling them because that takes up a lot of energy and resources," Hazem explained. They essentially collect the bags, sterilise them, and then use a handloom to weave them into shape.

Initially, they struggled to find a place to get the weaving done. "The craft is almost vanishing in Cairo," Hazem tells us. They couldn’t find any workshops so they got creative; they visited a handicapped school where the children there are taught that particular skill. And then what started out as a simple university project (we can bet they got an A on that one) eventually expanded into an entire studio, and they now have their own workshop, as well as several awards under their belt. Not only have their designs garnered attention here in our trash-filled nation, but they also won a design award in Milan in 2013. The studio now works with several NGOs who help them collect plastic bags for reuse.

Reform Studio's designs are currently exclusively featured at some of the cities hottest interior hubs, including Eklego and Dokan Boutique. Why they selected the latter to feature their unique pieces? "Dokan are very choosey with the products they display," Hazem says, "They select products that have a story behind them." And Reform's cool pieces in saturated hues definitely have a tale to tell.