We get up close and personal with Egyptian sensations, Sharmoofers ahead of their gig at the 3alganoob festival and talk inspiration, boxers, and drum circles... 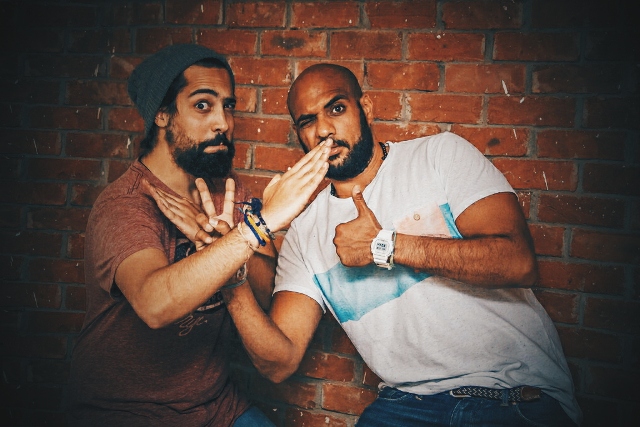 Egyptians are tired of listening to people point out all the negatives associated with living in this ancient land. It is no secret that there are a myriad of problems here, but after a while, the constant negativity ends up creating an atmosphere of misery that seems inescapable. On a mission to bring back the joy into Egyptian lives are the infectious and beloved musical tacticians known simply as Sharmoofers.  Ahead of their anticipated performance at 3alganoob 2015 in Soma Bay, I had the great fortune of sitting with Moe al-Arkan and Ahmed Bahaa, in the secret basement studio underneath the Tap, to learn more about their secret of connecting with Egyptians and spreading happiness through their original sound.

Egypt’s musical landscape is filled with uninspired cover bands, copy/paste imitators, and revolutionary sell-outs. However, none of these terms can be applied to the refreshingly original sounds created by dynamic duo of Ahmed Bahaa and Moe al-Arkan - aka Sharmoofers. In less than three years, their unique brand of comedic Reggae and Pop-infused Rock has garnered over a million views on youTube and nearly as many Facebook followers. To my ears they sound like a mix of the Barenaked Ladies' comedic positive Pop fused with the fun loving Reggae styles of Shaggy, but as Bahaa puts it, “We don’t really have a specific genre, we play Reggae, Funk, Pop, and maybe in the new album we will feature some Hip-hop.” By not restricting themselves to a single genre, Sharmoofers have managed to craft their own varied sound which instantly stands out and connects with listeners hungry for deliciously Egyptian ear candy.

At the heart of Sharmoofers' popularity is the fact that they are unique storytellers in a field of too many uninspired imitators. “Wust el Balad is one of the bands that started the underground scene here in Egypt. I can see about 10 bands that are copying and pasting Wust el Balad until now. Inspiration is not copy and pasting. That’s the problem here in Egypt,” explains Bahaa. Avoiding the fine line separating inspired bands from terrible imitators, Sharmoofers songs are distinct as they are often crafted organically. “8 out of 10 times our songs come together from being in the moment and 2 times out of 10 the song is planned before we jam,” describes Al-Arkan.

Delivering lighting-fast, often humorous observations, Bahaa lyrically draws inspiration from everyday experiences that often go overlooked. Take for example the popular hit “Khamsa Centy” (which translates to five centimeters). When I first saw this track, I thought it would be a crude song making fun of men with small penises but I ended up being way off.  Explaining the inspiration behind this track Bahaa reminisces, “in college I was in Applied Arts and we would sit on high chairs for drawing. The song is about being in winter, when the doorman is washing the stairs and the bottom 5 centimeters of your pants get wet. Sitting on the high chairs in class my pants would get higher spreading the cold wetness on my skin. It’s not cool, but makes for a fun song.” It is Sharmoofers' ability to create catchy tunes out of the everyday that makes their songs addictive. “Each song has its own place with its own bubble. If you listen to the song “el-Boxer”, it's typically every guy in the world, not just in Egypt; you have a day where you sit at home in your boxers, on the couch and you just eat junk food and you do nothing,” explains al-Arkan.

Even when Sharmoofers choose to tackle a serious issue like sexual harassment, they find a way to sing about in a comedic way without being offensive. According to Bahaa, “Our song Kanoon el Bartaman (The Jar Law) is about making a new law against sexual harassers. Any girl who gets harassed points out the guy, we take him, cut off his dick and put it in a jar and place it in a big museum with their names and the date and where it happened.”

Hoping to continue building momentum Sharmoofers are planning a series of shows, and a new release that may drop as early as this summer, and no later than the end of the year. If you can’t wait that long then there is a good chance that Sharmoofers will be offering a sneak peak at 3alganoob 2015 in Soma Bay. Even more exciting is the fact that Bahaa will be setting up a Bongoz drum circle at 3alganoob, giving everybody the chance to jam alongside this talented musician. “It’s an amazing way to release stress and generate positive energy between people, especially if they don’t know each other. Many people dreamt of being a musician and they couldn’t be a musician, and many people can play music but they don’t play with people. It’s not a session, it’s not teaching; it’s giving the right for people to play music. That’s the drum circle. That’s the main thing. You never give them the feel that you’re teaching them. When I facilitate the drum circle, everybody is happy and everybody is positive, and most importantly everyone feels like they want to play drums again,” Bahaa describes passionately.

Aside from their performance and the planned drum circle Sharmoofers are also looking forward to catching some of the other amazing acts. “I love Jadal. So I’m really happy that I’m going to watch them because when they came to Egypt I didn’t get to catch their set. I'm also excited about Autostrad, they’re really crazy on stage, and have this amazing positive energy,” an excited al-Arkan highlights.

There is no shortage of reasons to catch their set at 3alganoob, however considering tickets are almost sold out, if you happen to have missed your chance to grab a ticket, then not all is lost, as they will be performing tonight at the Cairo Jazz Club. It isn’t everyday that a band comes along and manages to restore happiness to Egyptians. In this day in age Egyptians want a reason to dance and laugh, and thanks to Sharmoofers they can do both.