We came across Egypt's first dedicated pie restaurant and spoke to long-time Cairo expats and owners of Yum, Susan Milbank and Christina Hackenberg, to find out more... 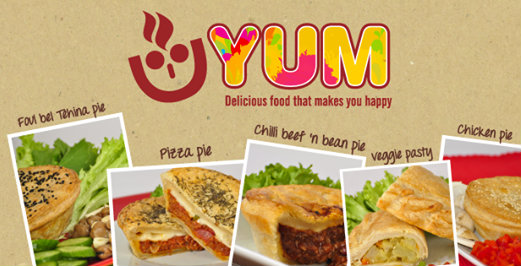 Shut your piehole, there's pies in Egypt?! Not the generic, dry, crusty apple pies that you excitedly order at every restaurant when it's time for dessert in the hopes of finding that nice home-cooked taste, but which end up being dry and tasteless with centres still icy from the freezer, but actual PIES? Sorry went on a little bit of a tangent there, venting our frustrations at Egypt's lack of proper pies. Anyhoo, Yum the brainchild of Cairo expats Susan Milbank and Christina Hackenberg, is an actual, proper, full-blown pie store in Mohandiseen, with the type of pies the English grandmother you never had talks about. Think Chicken and Mushroom, Classic Beef, and even a Foul & Tehina Pie for all you Egyptian-cuisine loving foodies.

The store opened its doors last December, after a year of preparation. Both owners had dabbled in various other things before they decided "it was time to make something for us." Australian-born, Milbank has lived here for 32 years, "too long, million sana," she says in an accent that doesn’t betray the fact that she's essentially a foreigner. We gawk at this because we can't imagine someone not Egyptian voluntarily moving here and then voluntarily staying here for 32 years but she says, "Egypt is my home." Her partner Christina, is also of the Egypt-loving variety of khawagas, having lived here for an almost equally-astounding 20 years. The idea to make pies came about because apparently, "Australia is very famous for their pies – it's their national food." Who knew? We thought the only thing the land down under had was dingos and toilets that flushed the other way around. And kangaroos, of course. Apparently, they also make a kick-ass pie. And now that kick-ass pie has made its way across the ocean and is officially in Egypt.

The store boasts a massive variety of savoury pies, from a Chilli Beef Pie to a Shawerma Pasty, and even a Pizza Pie which basically combines two of our favourite things in life. Milbank personally trained all the chefs, using recipes she adapted and developed from her mother, so you know they're legit. Next on the horizon is a Messa2a3a pie, which we personally can’t wait to try because we imagine messa2a3a can only taste better in pie form. And for the sweet tooths out there, they've also got a number of awesome-sounding desserts like a Lemon Zesty Crumble and a Chocolate Fudge Caramel Brownie  which is "to die for." We're sold.

Find out more about Yum and how to order on their Facebook page here.