The False Virtues of Virginity

Mouwafak Chourbagui argues that male control over female sexuality stems from a selfish and perverted understanding of sex and calls for a 'Pussy Intifida' to offer both men and women a second chance at understanding their bodies... 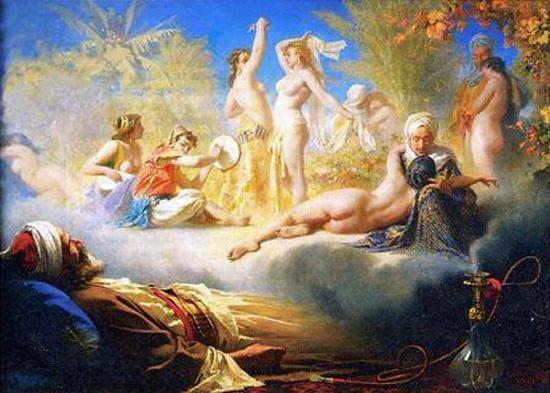 “It is an infantile superstition of the human spirit that virginity would be thought a virtue and not the barrier that separates ignorance from knowledge.” ―Voltaire

I was born on Women’s Day so each year, on March 8th, we both get some rare attention. It makes me happy to share my birthday with women; I generally like them, most of them are cool and some of them, for reasons that escape me, even graciously allow me to boogie their tamtams. But as the clock approaches 12 a.m. to announce a new day, our hypes suddenly deflate, traffic in our directions dissipates and we return to our normative states. We at least had the spotlight for 24 hours. I figure I was celebrated, like every year, for being an asshole but I also wonder: what were women celebrated for? Who is the ideal Egyptian woman? The virgin?

I have always been turned off by the afterlife promise of 72 virgins. That’s too much pressure for a freshly dead man. Plus it feels like a fishy deal, an unlikely proposition boiled in arbitrary waters. Think about it. How are they kept in pristine virgin condition for all the new arrivals? Is there some kind of recycling policy ensuring vaginal conservation? Have Chinese businessmen somehow infiltrated heaven with hymen merchandise? Or perhaps the act of post-sex cuddling magically remoulds them back into virgins for the next batch of ethereal humpers. But let’s assume that it is true and 72 virgins will greet me at the pearly gates. Is it something that should excite me? I can’t see how. I will probably be a bit jet-lagged, having gone through a tiresome transformational voyage from mortal being to celestial gigolo. In that dazed and confused state, I doubt that I will have the required energy to satisfy 72 first timers, no matter how many Red Bulls cheering angels shove down my throat.

But humour aside, the afterlife promise of the 72 virgins reveals uncomfortable truths about mainstream male perceptions on women. This narrative tells me that the ultimate reward for staying away from booze, pork and the armpits of Sherine during my mortal life will be sex.  Not just any kind of sex, mind you, but sex geared exclusively at my pleasure; my nirvana. The virgins are numerous, nameless and serve no other purpose than leading me towards heavenly orgasms. Moreover, they have all preserved themselves for me. All of them are untouched, pure and pink, waiting for their Godot to take them to the other side. It might seem like a good deal, perhaps even like the ideal post-mortem perk, but in truth it is symptomatic of male selfishness and dominance over the opposite sex. Here, the woman is restricted to being a penis’s punching bag. Sex is solely for the man’s pleasure and the female body is merely an extension of the male's kingdom. The woman has no say in the matter, she is simply reactionary to male desire, an oxymoronic desire of fucking the unfucked.

Is it really that important to be the last man to sniff her “innocence” and the first and last man to taste her awakening? And isn’t it hypocritical to try and marry an unquenchable appetite for sex (72 virgins) with a sanctity for virginity? It seems like a recipe for psychological problems, sexual frustrations and underground Plan B sodomy.

Men are creators of a selfish sexual narrative and virgins are subconscious re-enforcers of their own oppression. By refusing to open their legs pre-ring, they are vindicating and fortifying the male dominated ideology that a woman’s vagina belongs to men, that it should be preserved for one “special person” and used mainly as a vessel for procreation. God forbid that we cede pussy control to women. Our patriarchal society cannot deal with sexually free women. They terrify us. What if one day they learn of their true sexual prowess? What if they emancipate themselves from reactionary rhetoric and take ownership of their bodies? Perhaps they wouldn't be so easy to control. And we love to control women. From a young age we deprive them of clitoral pleasure, sell them a biased, self-centred narrative, build a mental infrastructure that makes them dependent on men, shame them for having thoughts that exceed socially constructed parameters of sexual correctness and peer pressure them into conserving their “innocence” until a suitor comes along. And why not cover them up while we are at it? Not to safeguard their dignity and modesty, as clerics like to claim, but rather to limit our temptations and drooling.

What the obsession with virginity all boils down to is men’s inability to cope with phallic competition: “What? Another penis can satisfy you more than mine? Blasphemy! Your vagina is my ego-boost not your pleasure booth! Know your place woman!” And what is her place? To be offered to a husband untouched and pure? Like a gift that no one else has opened before? Like a piece of meat that can only be enjoyed by one fork? It is a perverted concept of love, a sickening normalisation of possession and a formula for a sad existence

It’s depressing to observe the weight society has put on sex in this country, especially on free women. They have been dealt shitty cards. From the typical father who is unable to transcend his understandable yet subjective and selfish aversion to his daughter having sex, to the bawab’s Gestapo eyes tracking her every move, to the army of horny men ready to pounce once they learn that she has been “opened,” to the judging tongues of vicious “friends,” jealous that pleasure comes to her guilt-free. Not to mention the name calling she attracts for having the audacity to choose how to live her mortal life.

When is a woman a woman? As a daughter catering to the rules of the subjective realities of her father or, as a wife, heeding the calls of the subjective realities of her husband? Perhaps some esteem is finally achieved when she becomes a mother. It seems to me that society does not truly respect women until they answer their biological call and deliver babies. Finally, she has graduated from being just a visual décor testing men’s resolve. She now has a purpose, a meaning, a desired social role. But more importantly, we now have an image of her we can painlessly digest: one in which she uses sex not for pleasure but for procreation, her boobs not for kink but for nourishing, and her life not for herself but for her kids.

But what about the other women? The widows, the divorcees, the sexually active singles? Should we throw them in society's recycling bin? They are damaged goods anyway. Someone else has seen them naked so they can serve no purpose other than perhaps a quick fix before we meet the “respectable woman” to build a life with, someone who kept herself in pristine condition for us while we were busy fucking expats and kafergyptians.

But by killing the fetish of the virgin and by rejecting the shaming of the whore, we do not only release women from a repressive binary and a reactionary fate, we also liberate man from his own oppression. If we continue to define sex in egotistical parameters and one-sided narratives, we will end up being the victims of our own greed. Like the mind has to be in osmosis with the body for healthy sex, the woman too has to be in equal standing with the man. If not, sex is just a selfish ego boosting exercise and when we engage in selfish sex, we end up only fucking ourselves.

So for Women’s Day, I’d rather celebrate and raise a glass to those women courageous enough to reject the main social narrative about sex and who refute gender roles that deprive them of the ownership of their bodies. If society is intent on calling these women whores, then so be it; Fuck the virgins and long live the whores!