The Rising in My Heart

CairoScene's feisty feminist, Sally Sampson recaps her inspiring One Billion Rising event and flashmob, pointing out that the criticism and downright cruel comments thrown at her from the public prove the need for Egypt's women to stand up... 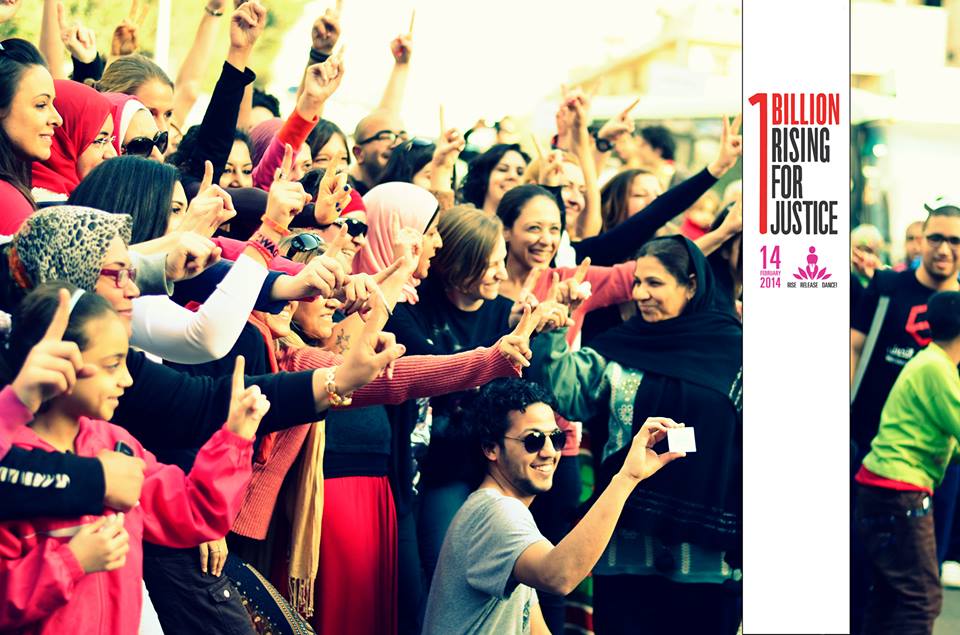 So it’s been almost a week since the international One Billion Rising for Justice Campaign was launched worldwide; the campaign that was created to empower women across the globe, bring the issue of violence against women and girls to the forefront of the world’s agenda and to celebrate the perseverance, tenacity and the strength of women everywhere through art and specifically through dance.

As many know, I had my own rising here in Cairo on the 13th of Feb. which was held at Bikya Maadi in association with UN Women, and featured amazing performances from percussionist Sabrine El Hossamy and monologues from actresses Ingi AbouZeid, Dahlia Sabbour and Marwa Tharwat. We also had as special screening of the BuSSy Monologues, (monologues in Arabic about controversial and taboo social problems that impact Egyptian society) courtesy of Sondos Shabayek, who is known for her other works such as the Tahrir Monologues.  It was a night where we celebrated women and spoke fearlessly about real issues that impact the female population of Egypt. That day, we (an audience of both men and women) rose so that women could have a right to their bodies, minds, hearts, futures and destinies. And I like to believe that everyone who left that evening took a piece of the rising with them in their hearts.

And then on Feb. 14th, while many were celebrating Valentine’s Day, there was another rising that took place: a flashmob in Korba, (which you may have heard of) where a group of women and girls (including me) who knew the choreography of Break the Chain (the official One Billion Rising song) came together, full of joy, optimism and determination to raise awareness to the epidemic that is the endemic violence against women in our country. And as we danced to the choreography in unison, sending out a message that the brutality and the aggression that women in Egypt face cannot exist any longer, we felt an enormous amount of support from those who stopped to see what we were doing. And I think we all went home that day feeling a sense of hope that things could truly change one day.

I was very lucky to make contact with the organiser of the event, Sally Salama (yes, another Sally) and we both knew that what we had on our hands was the start of something that was extremely profound and increasingly necessary, but neither of us nor any of the people involved in the rising, could’ve anticipated the attention that the flashmob got, as soon as the video was posted on YouTube.

All of a sudden, the media went mental, and the public more so. A combination of positive comments and a severe backlash of negative, abusive comments were all of a sudden unleashed. The rising went from being a bold statement to end violence against women to being seen and reduced by many into a Westernised, misbehaved attempt initiated by an insolent group of women inappropriately dancing in the streets, trying to get attention. In short: a bunch of fame-whores.

Now, this sort of reaction is not totally unexpected. Naturally, with the repression of women in Egypt and the overall cultural norm that dictates that a respectable woman is hardly seen and practically never heard, I knew that us standing up, empowered, taking a stand and speaking out was going to rub some people the wrong way.

I won’t address the clearly abusive and unconstructive comments that ranged from ‘Banat testahel il 3onf fe3lan’ (Those girls truly deserve violence) to ‘Asl mafeesh fe 7ayat-hom dakar ye3alemhom el adab’ (They don’t have real men in their lives to teach them how to behave), because such comments actually validate the cause and show that we have hit the jackpot when it comes to the importance of addressing women’s issues in Egypt. When the sort of people that think like this are not a minority, what we have on our hands is a disaster.

There is another group of people who sceptically have looked at the whole event with contempt and scoffed saying ‘What is a bunch of girls standing or dancing in the street going to do to help ease the suffering of victims of violence, or help to stop the cycle?’ And to these people, I say what I have always said: Nothing can change unless there is awareness. Before education, before there are initiatives, we have to acknowledge that there is a problem and that means people have to come forward and take a stand. Breaking the Chain is about first breaking the silence. And you can do that in conferences, you can do that in support groups, but you can also do that through art, through music, through dance and through theatre.

And yes, by bringing that to the streets, a very powerful point is made. Even if it means going against the gradient and the societal norms, speaking out about violence can no longer be an option and the only way to encourage women to come forward with their stories of abuse, rape, incest, and every other form of injustice is by stepping out and not being afraid of the public-eye and all of its scrutiny and criticism. After all, the Egyptian revolution started within the hearts of Egyptians many years before Mubarak was removed, but the ball was only set into motion when people started speaking out and stepping out into the public sphere with their beliefs and demands.

And then there is the group of people who saw the video of us taking a stand in the streets of Korba and with their eyebrows furrowed and their eyes shooting invisible deadly lasers, said only one thing: HARAM!

This makes me laugh, and not because I do not respect religion. On the contrary, there is nothing I respect more. I laugh because I am disturbed that they can say haram and think that it actually applies to me, when I am taking a stand and demanding justice for women who have no one to speak out for them. I find that absurd.

When I think of all of those things and I take time with God by myself, I don’t know about you, but it becomes very clear to me what is truly haram and what is not.

It is unmistakable that women’s issues cannot be ignored or put on the shelf like an old manuscript until, every now and then, someone picks it up, dusts it off, holds a meaningless conference somewhere about it and then puts it back to gather dust again.

And I have always said that no change was ever instigated by a majority. It always starts with one person or a small group of people with a shared vision stepping out and making it happen, and I believe that is what is happening today in Egypt.

Samuel Adams puts it more eloquently in this quote:  “It does not take a majority to prevail…but rather an irate, tireless minority, keen on setting brushfires of freedom in the minds of men.”

The rising remains within us. And yes, as we speak, as we dance, as we rise, I remain optimistically hopeful that change is not unattainable and that there will come a day, when in Egypt, there can be the preservation of rights and an overall respect that exists that does not take into account gender.