The enigmatic Tunisian actor is the name on everyone's lips this Ramadan, as his role in 'Taht El Saytara' captures the hearts of viewers. Farah Hosny meets the man of the hour to talk about the irrelevance of big breaks and the importance of small roles... 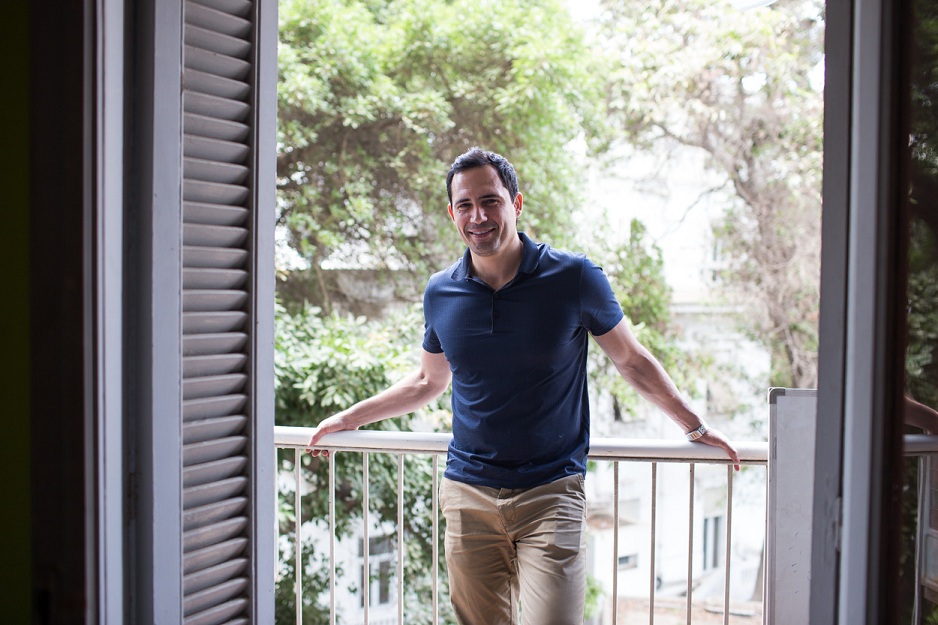 When I casually mention to a friend that I’m en route to interview Dhaffer L’Abidine, a high pitched shriek followed by “TAKE ME WITH YOU” is the instantaneous reaction, an obvious indication as to the Tunisian actor’s recently acquired heartthrob status among females of the Arab world. Though the actor has actually nabbed roles in massive Hollywood productions such as The DaVinci Code and Sex and the City 2, he’s only recently been catapulted into the spotlight due to his performance in one of this year’s most talked about Ramadan shows Taht El Saytara, opposite Nelly Karim who plays his wife. He currently commands a legion of love-struck fans for his portrayal of a husband dealing with the consequences of his wife’s heroin habit; stoic and supportive in light of her addiction. “I think the story itself is very different and new for the Arab world,” L’Abidine says of why the show appealed to him. “Not necessarily just the topic of drugs but more the way the story is told. There’s a background story here about drug addiction and addicts and that also permeates their love story and makes it atypical. And the topic of addiction has never been treated that way really, with details and in depth.” In person, he’s soft-spoken and cordial, almost shy. In a navy shirt and chinos, he leans forward in his chair when he talks and is quick to flash a smile; he seems malleably easy going but not extroverted.

Though the actor is now firmly entrenched in the cinematic world, his transition to acting started later in life. After a stint as a soccer player until he was 23, he realised he wanted to switch careers. “I wanted to do acting but didn’t know how to get into it,” he explains. After landing a commercial, the director offered him the opportunity to be an assistant. “So I started out as 3rd assistant director and I started learning about the industry,” L’Abidine says. Taken with it, he then delved into studying drama in the UK, graduated two years later and soon after landed a role in British TV series Dream Team. This eventually launched him onto an international stage; he acted in a smattering of television shows, including Spooks, landed several supporting roles in big budget Hollywood movies like Children of Men, and on a more local scale, graced Arab screens in last year’s Vertigo, essentially acquiring a unique position occupied by very few Arab actors; that of toeing the line between regional and international cinema. But when we question whether it is more of a victory to nab a role, albeit a small one, in a huge international production like The DaVinci Code, or to get a starring role in a regional television show, he simply says: “a role is a role and you have to play it right. You have big roles or small ones or something in between but it doesn’t matter how many lines or how many scenes you have, you have to play it right because there is a truth behind every character.” His dedication to simply try and capture the essence of a character, regardless of screen time, is what drove him to continue in his career, despite the shaky ground that is an actor’s life. “It’s a difficult industry; it’s not secure,” L’Adibine says simply. His accent has a slight British lilt threaded through it from his years in the UK and in Arabic he switches casually between his Tunisian dialect and the Egyptian one he’s had to acquire for roles over the years. “At the beginning when you start acting it’s a bit scary,” he adds with a laughs. “You finish a job and you’re waiting for the next job and you don’t know what’s gonna happen. But then you get used to it, that’s just the way it goes.” But that same instability is intrinsically bound to the spontaneity of the job; an element he craves. “It’s always fresh; there’s no routine. That’s something I enjoy. You learn a lot: about people, about society, about various subjects and its never the same thing. Every different job will bring with it a different character, a different story, so you learn constantly.”

In his most recent onscreen incarnation, playing the husband of a drug addict, L’Abidine is drawn to the universal complexity of relationships, a factor heightened in this role by the unorthodox circumstances in which his character’s marriage to Mariam, played by Nelly Karim, exists. “They’re in exceptional circumstances. It’s a difficult situation; I think that they really love each other but at the same time...” he pauses, trying to pull his exact point out of the air. “There’s some semblance of cruelty in their relationship. Their dynamic is compelling; they love each so much but they’re cruel to each other, so that’s interesting, acting-wise.”

But despite his deliberate decision to focus on the Middle east this year instead of pursuing roles abroad, his admiration for both his co-star – “we all know how good she is,” he says simply of her onscreen talent – and his affinity for the month that allows for Arabic television to rise to the forefront, he has his reservations about the sheer satiety of shows which flood our screens yearly. “Culturally, mosalsalat are definitely a vital part of Ramadan!” he laughs, “But there’s too much waste.” His argument is that, due to the multitude of shows which emerge during the month of Ramadan, many of them simply fly under the radar. “There are a lot of things that don’t get seen. Hopefully in the future there will be more work during the rest of the year too.” This high intensity focus on the Ramadan schedule also doesn’t allow for shows to reach their full potential. “There’s that pressure to finish everything just before Ramadan so maybe you don’t give it enough time, you don’t work enough on it – details, post production…you don’t give it its due,” he explains, “That affects the quality as well.”

But in a sea of shows, Taht El Saytara has managed to stand out, and by extension, has thrust L’Abidine into the limelight. When we ask whether he gets recognised and stopped a lot, he replies with “Sometimes…” in a voice slightly above a whisper as if he’s embarrassed about his sudden ascension to fame and fangirldom. “Look,” he says contemplatively, “In a way, we do what we do so that people watch it. And if they react well to it, then that means there’s something there, that something clicked.”