Dancing on the Nile never felt as real as atop the deck of this majestic boat, a mixture of the wind-swept feel of a felucca with the grandeur of a river cruise ride. 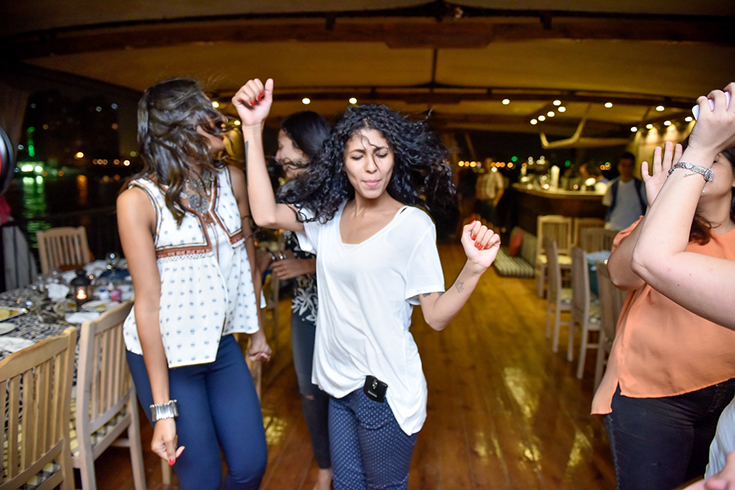 Right in in heart of the Nile, anchored between Maadi Island and its traffic-laden Corniche, there is a boat that sets mystic imaginaries alive to the sound of an oud. Setting off for the ride from a lush green dock filled with washed-down feluccas and what seems like a bus-boat, we sail halfway across the Nile until we reach Royal Dahabeya La Marée. From the distance, the boat looks like the candlelit mixture of pirate fantasies and sailor delusions.

We step on the deck and the scenery is breathtaking. Going up the stairs that lead to the main deck, the twinkling lights of a multi-coloured Cairene skyline rise to our sight. All around us, there are sparkles of red, yellow, and blue lights, dotted by the ubiquitous green lights of the city's one thousand minarets. To one of the sides, the white dust-ridden sail of an old felucca flaps to a refreshing wind on this hot summer night. We’ve just stepped onto the boat’s wooden central deck. We are greeted by colourful leather a3da 3araby dotted along the deck, set around a series of low tables where people play taula and dominoes while sipping some tamr hindi and sobya. On the other side of the deck, a band is crafting enchanting melodies on the oud to an audience that puffs out shisha smoke in excited whirls. But as the show comes to an end, a luscious surprise arrives as we are led onto the tables to savour an all-encompassing Ramadan sohour. But, once again, music begins to tickle our ears to the sound of Arabic classics, sha3by and shami dabke, and everyone is up on their feet. Our moves are hilarious; attempting to jump up and down to the Syrian dabke while swaying our hips to imitate the iconic Egyptian belly dance sure does not look gracious, but it’s a hell of a fun try.

The night’s dying and we’re spellbound. It’s not a felucca, although it feels as relaxing as noiselessly sailing down the Nile; it's not a cruise, although it feels as majestic as the Luxor-bound giants making their way south. Royal Dahabeya La Marée is the delicious mixture of grandeur and genuineness, a legitimate daughter of the Nile claiming her heritage back.