Sexy steaks, beer pong and one of the best sound systems out there makes Bus Stop your go-to nightlife venue in the sandy suburb. 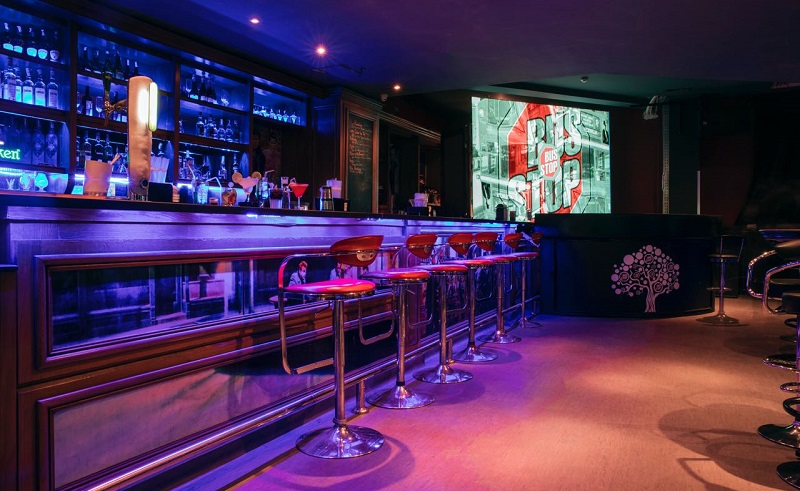 Historically, New Cairo hasn’t exactly been the first destination that pops to mind when you think nightlife – you’re either there to meet a friend for a coffee or lunch, or you’re there to work. But ever since Bus Stop made its way over to the urban desert, the New Cairo nightlife scene has taken a pretty fun leap forward. Anyone who’s ever been to Bus Stop in Sharm El Sheikh will tell you that these guys know how to get a party started, just as much as they know how to keep things chill and laidback – and there’s more to Bus Stop than meets the eye these days…

You know what happens when beer and table tennis meet at a party and decide to go home together? It isn’t playing with a beer bottle if that’s what you’re thinking, it’s beer pong; every Monday is a fun day over at Bus Stop, where you and yours can both drink and pretend you’re athletes as you throw ping pong balls in each other’s cups. More of a football fan? Why not scale it down and play foosball with your buds and make the loser pick up the tab (nobody’s a loser at Bus Stop though), and if you’re more of a classic bar goer, they also have billiards and darts.

Dishes to Die For

Bus Stop pride themselves for having some of the best eats this side of Cairo (which is saying a lot); with a kitchen staff that knows what it takes to satisfy Cairenes, Bus Stop’s menu is might come off simplistic, but there’s a famous saying when it comes to food that more kitchens should head – that simple is beautiful. Whether you’re more into green curry chicken with a side of dragon balls, or one of their expertly grilled steaks (an art form in and of itself), Bus Stop’s line of eats hits the spot – and hits it hard.

Get Your Salsa On

Every first Saturday of the month, Bus Stop hosts their signature Salsa night, and in a club scene saturated with electro-techno-whatever (not that it’s necessarily bad), it’s nice to see a change in rhythm and sound. Folks can warm up their bodies and put their Salsa skills to the test with help from the talented folks over at Brass Monkey Studios and SoulMotion making bodies and rhythms coalesce. So if you feel like shaking it up, down and around to some sultry Salsa sounds, mark every first Saturday down.

Quality Sounds with No Strings Attached

It’s Bus Stop, people. What more do we have to say? The precursor to Sharm’s Pacha doesn’t need much more embellishment, but just in case you’re a stickler for details, we’ve got a few more.

Bus Stop New Cairo’s party setup, including the lighting and sound systems, all come straight from the eponymous Pacha, so you know you’re in for a loud-ass night of celebrations every night from 11 to 3, when Bus Stop hosts their daily parties with a variety of local talent. One of the biggest selling points (at least to us) when it comes to Bus Stop is the fact that they don’t do the whole minimum charge thing on weekdays, so you don’t have to worry about the nittygritty of it all; just pull up a chair and start chugging the night away.

Don't believe us? Stay tuned to Bus Stop's schedule on Facebook and check it out for yourself.