Forgot your watch at home? Feel like having noodles from the place that doesn’t deliver? That’s all in the past now. 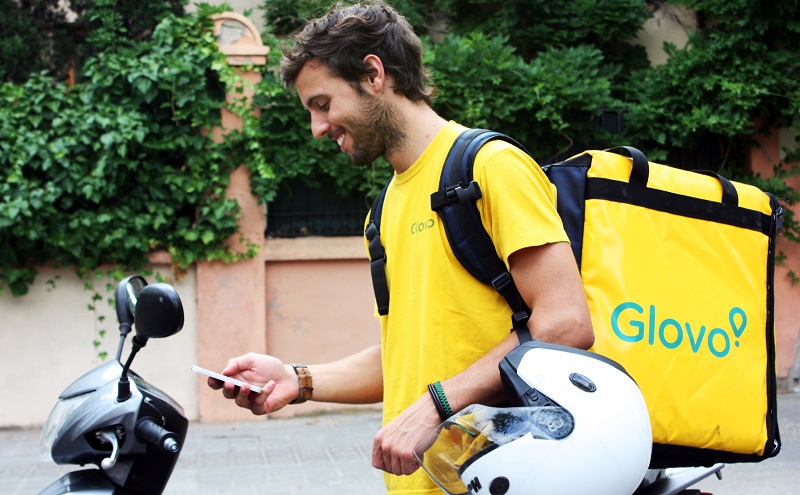 Apart from making way for life-saving medical breakthroughs, pseudo-sci-fi transportation technology and synthetic lifeforms, time aids humanity inch ever closer to a state of ultimate convenience. Among its many powerful pioneers are the hundreds of seemingly unassuming startups; nourishing the world’s young visionaries towards a future full of untethered innovation. Now that the inspiration is out of the way, let’s say I work in Downtown and I want my favourite fried chicken and a bottle of sin juice from Masoud, along with a blue charger cable (the colour is crucial). Being a writer at Cairoscene means I’m bound to my chair (and not in the way I’d like to be), and neither Kokio nor Masoud are going to deliver to Downtown, nor are they going to volunteer and get me my baby blue cable.

Obviously, your Glovers are forbidden from delivering anything illegal (no shotguns or substances), but they can save you the trouble of getting the look from your local pharmacist when you want to buy a pack of condoms

Enter Glovo; the modern world’s most intuitive and accessible courier delivery app, and one that’s going to make the already-easily deliverable wares of Egypt even simpler to obtain, seeing as how it eliminates the horrific act of speaking on the phone, with people, using words. Having spoken to Mr. Utsav Agarwal – Glovo’s wonderfully insightful Head of Expansion for Europe, the Middle East and Asia-Pacific – I gleaned a few crucial details about the app that you should definitely keep in mind. “I as well as Glovo are well aware of Egypt’s prolific delivery services; I come from India and we have the same ease when it comes to having even the smallest of items taken to your doorstep. But instead of having to have long conversations on the phone about what you want and where you want it delivered, and having to inevitably guide your delivery man to where you live, especially if they’re unfamiliar with the area or if you live somewhere far out.” No longer will you have to put on your semi-clean T-shirt over your pajama pants and drive over to where your delivery guy decides to call it a day; with Glovo, you give your Glover (Glovo’s intimate term for courier) a GPS location, and they get to your place, and better yet, you can track their progress from the establishments they’re tasked with all the way to your parents’ doorstep, don’t pretend you can afford to live alone, Mostafa. “On my first day here in Cairo, I wanted to get my laptop delivered to the workplace, so I requisitioned a Glover to reclaim it from my place. It took about 35 minutes to get to me, and all I had to do was tap my phone a bit.” Though Utsav might be their Glovo’s impromptu spokesman, he doesn’t put up any acts when it comes to the efficiency of the app when it comes to delivering your hard-earned bits and bites. Seeing as I as well as many a disconcerted Egyptian care about the leisurely devil in the details, I had to ask about the financials involved with using Glovo, to which the kind Mister Utsav gave a prompt answer. “All you have to do when it comes to ordering an item, at current at least, is to pay the price of the item itself, as well as a flat EGP 10 delivery fee. As is only fair for the Glover, the delivery fee in later iterations of the app will depend on the distance between the establishment and your location.” Seeing as Glovo is currently functional in some parts of Cairo, it’s only fair that the hardworking couriers of the convenience-oriented app should get their due comeuppance.

On my first day here in Cairo, I wanted to get my laptop delivered to the workplace, so I requisitioned a Glover to reclaim it from my place.

On the point of the couriers themselves, it’s no doubt that Glovo is of massive benefit to bothcustomer and courier; seeing as how Glovo only requires that couriers have valid national ID cards “in case anything goes awry when it comes to your delivery,” as well as owning either a motorcycle or a simpe bicycle. “With Glovo, all a courier has to have is a functioning motorcycle or a bike, making it much easier for a massive section of Egypt’s potential workforce to get in on the potential of Glovo’s delivery services. Right now, deliveries are usually spaced out to seven or eight kilometres between delivery locations, but that is subject to change.” Utsav as well as Glovo might have to do some research when it comes to our two-wheeled workforce; seeing as how they’re more than OK with zipping it over much greater distances than just eight kilometres. Easier for you, easier for me, profitable for potential Glovers and the establishments themselves. “We make a profit from a commission placed on the establishments themselves; they get much wider coverage for their already coveted services, our Glovers get their just deserts, and the customer gets what they want. It’s a win for everybody involved.” As it stands, Glovo has a good amount of commissioned establishments under their local mantle; iSHOP, Shawerma El Reem, Mince Burgers, Mr. Wok, bakeries, pastry shops and even your friendly neighbourhood Koshk benefit from the ever-evolving local Glovo service’s two-wheel-driven courier service straight to your door. You can even have them deliver your keys (that you so incompetently forgot at home, Manal) from your abode (provided you have somebody who can open the door for the Glover) straight to your whereabouts. Obviously, your Glovers are forbidden from delivering anything illegal (no shotguns or substances), but they can save you the trouble of getting the look from your local pharmacist when you want to buy a pack of condoms, and they can deliver your much-needed numnums without you having to get out of bed (although you probably should if that’s the state of things).

You can even have them deliver your keys (that you so incompetently forgot at home, Manal) from your abode (provided you have somebody who can open the door for the Glover) straight to your whereabouts.

Wondering about what areas Glovo currently covers? Zamalek, Dokki and Mohandesin are fully covered as of the time of this article, and over the coming weeks, Glovo will expand to the rest of middle and western Cairo. “We plan to fully cover the rest of Cairo over the coming weeks, especially gunning for Downtown; seeing as the Greek Campus is a wonderfully nurturing platform for Egyptian startups – which feed heavily into each other’s growth and revenue streams.” Pretty soon, the underwhelming eastern side of Cairo (shout out to my New Cairo peeps) will have full Glovo coverage; making my eternal struggle to get a functioning lighter and cat food much, much easier, and saving me valuable time to write more rivetingly insightful lifestyle articles. Though delivery in Egypt is a phenomenon in and of itself, you can never have enough convenience whenever necessary, and Glovo is sure to make that goal much more achievable.