12 Ways Egypt Will Benefit From a Trump Presidency

Today may prove to be the world's darkest day, and although many expect doom, we have found at least 12 hilarious ways Egypt will benefit from a Trump presidency. 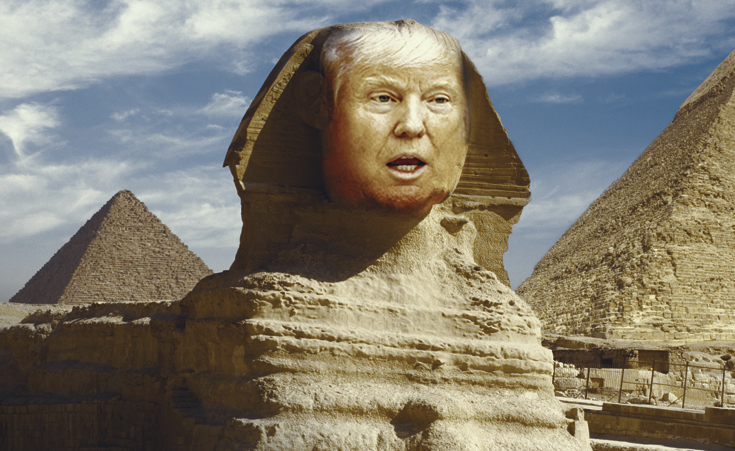 The world has every reason to be afraid, as Donald Trump officially becomes America's next president. However, before you consider giving up on life, there's at least 12 reasons we could think of that Trump's win could actually benefit Egypt.

The dollar will collapse and Egyptians will finally receive relief as the Egyptian pound returns to 5 EGP per dollar. Tamer Hagrass receives an Oscar for his role perfectly portraying Trump in the upcoming Egyptian knock-off of American Psycho. All the Egyptians who were educated and living in America come back to Egypt, creating the largest family reunion resulting in a start-up boom unlike anything ever witnessed. Egyptians no longer try to dodge military service, understanding that global nuclear war is on the horizon. Egyptians stop complaining about their president, realising it could be a lot worse. Tuition drops at AUC as all their students are too embarrassed to be going to an American university, enrolling at GUC instead. Egyptians no longer need to make s3eedi jokes as Americans proved to be a better punchline. Trump’s win proves to be the greatest Ramez Galal stunt ever. Encouraged by Trump's win, Kanye prepares for a serious run at the White House, garnering millions of followers who are looking forward to Keeping Up With the Kardashians in the White House, while Egyptians finally get to enjoy their first visit from President Yeezy. Americans can no longer lecture Egypt on democracy