The alternative rock band return with their latest single ‘Ma Endi Fekra’ off of their upcoming album, ‘Hadis El Layl’. 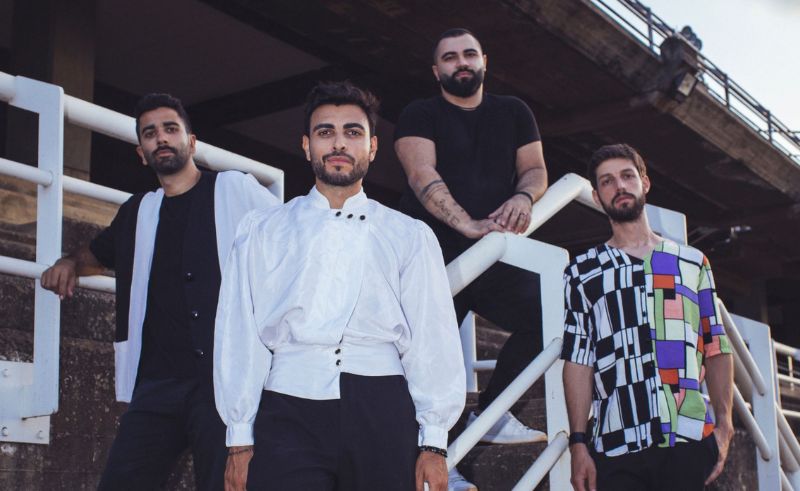 As contemporary music has been veering towards electronic aesthetics in recent years, Lebanese alternative rock band Adonis are embracing these trends into their sound with their latest track ‘Ma Endi Fekra’.

The release sees the band fusing elements of rock music with Levantine dance-pop in an effort to develop the sound of rock music in the region, seeing that most music today is heading in a more genre-fluid direction. Adonis returns with their classic instrumentation and sonic palette that fans have come to expect from the band, but we are met with an added twist of oriental dance music that is reminiscent of Lebanese pop hits of the 2000’s which takes the track in an unexpected direction. ‘Ma Endi Fekra’ is part of their upcoming album ‘Hadis El Layl’, which will likely see the band experimenting with other genres of music.

The track starts out with a simple rock-inspired drum groove, accompanied by a nostalgic guitar riff playing behind the warm and reassuring vocals we have come to know and love. In this track, lead singer Anthony Adonis tackles the topic of writer’s block and inspiration with the lyrics. The singer dwells over what he should write about, and seems as though he has multiple issues on his mind at once. As it seems that Adonis is finding it difficult to isolate one topic to address in the song, he chooses instead to tackle issues of identity, grief, and longing all at once by listing the things on his mind in a train-of-thought writing approach. The lyrics also pay homage to Lebanese icon Fairuz, by referencing some of her tracks such as ‘Keefak Enta’ and ‘Zourouni Kol Sana Marra’.

In the chorus, the track transitions from an anthemic rock tune into an electro-dance instrumental which heavily features elements of traditional levantine music. The instrumentation and sound selection take us deep into mainstream Lebanese pop territory, by fusing the bands alternative-rock sound with soaring synth leads and electronic drum grooves that have a distinct levantine flavour.

The video for the track, directed by Nadim Hobeika, takes a theatrical approach by starting out in a graveyard where lead singer Adonis is submerged deep in his thoughts. The line ‘Kol Sana Marra’ appears to be engraved on a tombstone, which might reflect Adonis accepting the end of a relationship, by acknowledging that the hope of keeping in touch with the other person has died out. The video then takes us into the recording studio, which mirrors the themes of writer's block and inspiration discussed in the lyrics, as we see the band working on their music.

In the chorus, when the instrumental transitions into an oriental soundscape, we are met by a group of traditional dancers taking over the video by violently barging into the recording space and giving a spectacular dance performance. The dancers then engage in a fight sequence with the band, which evokes themes of resistance which the band are displaying. As the video goes on, we are ultimately met with a sequence in which the band and oriental dancers set their differences aside to come together and co-operate, which symbolises the band’s decision to embrace a different style of music in this release.

Watch the video for ‘Ma Endi Fekra’ by Adonis: