In the fourth of our series of interviews shedding a light on new, up-and-coming musical talent, we talk to Kareem Hosem, the man with the charming English accent and the voice of an angel... 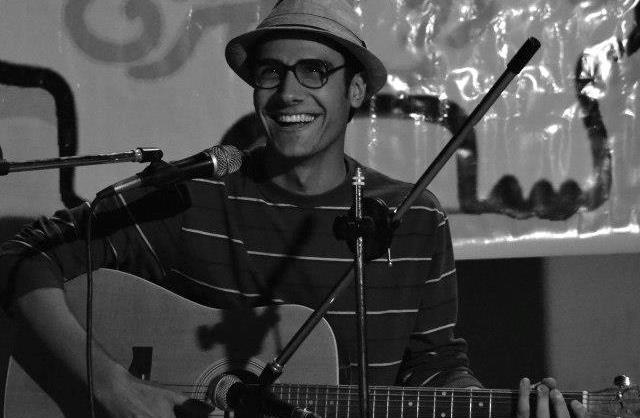 He may have kicked off his career butchering Ain't No Sunshine in Gouna, just over a year ago, in a location he can't remember because he was too drunk, but with a voice that would give John Meyer a run for his money, Kareem Hosem has been gigging around Egypt at hipster hangouts like Darb 1718 and Bikya BookCafe ever since and it seems like the only way is up. If you close your eyes when listening to his original tracks such as Strong Foundations, you can feel that same melancholic twinge that ties your stomach in knots – in a good way – that you get from the likes of Tracy Champan. He waltzed into the MO4 office a few months ago for a job interview and, ten minutes in, he had his guitar out, wooing every girl there with his British accent and soulful sounds. Here a re-enactment of that moment:

We have a chat with Hosem for the latest in our Boys & Their Noise series of interviews with up-and-coming musical talent:

How did you get into music?

My mother taped all her favourite records on to cassettes before she came here over 25 years ago and she'd always have them on in the car. So that was the beginning and I've loved music ever since and wanted to discover more. I started playing bass when a friend of mine lent me his for a while and then got my own as a present from my best friend and girlfriend at the time.

What kind of music do you listen to yourself

I listen to a lot of stuff. I've been in and out of phases, from Punk Rock/My Chemical Romance and shit like that, when I was around 14-15, to Electronic when I was 16-17, and moving on to older and newer stuff from other genres. Led Zepplin, the Beatles, Pink Floyd (I remember my mum telling me to go to my room, switch off the lights and just listen to Dark Side of the Moon), Arctic Monkeys when they first came out, Pearl Jam... all sorts of stuff. I'm always on the lookout for new music.

I play bass guitar, which I haven't practiced for a while now, and I play guitar but I'm still not convinced I can truly call myself a proper guitarist because I barely know any chords and I just mess around and see what sounds good!

I'm in love with football. I would've loved to become a football player when I was younger. I still follow the game all the time, check up on scores and watch as many matches as I can.

Who's your favourite band?

Favourite band is a tough one but I'll say Jack White as a musician in the many bands he's been in over the years. The man's a musical genius. Also the Arctic Monkeys are a very close second for me (I think Alex Turner is a lyrical genius).

Who are your favorite local artists?

Definitely RashRadio. And Adam Awad and Safi are two of the best young talents Egypt has got. Shady Ahmed is Egypt's John Mayer. I like a few of Hany Mustafa's things and think he's a wonderful musician and person. The Sharmoofers are absolutely brilliant at what they do! Neobyrd when I'm in the mood for something a bit Electronic and High On Body Fat when I want to laugh.

Do you have groupies?

I do. She works part time for CairoScene (Hey, Aida!).

My mother's very open to the idea, I don't know about my dad. I had a performance at Bikya one time and my mother was watching this YouTube video at home of a Kinks gig with screaming girls and my dad asked her if it was me.

What are the obstacles you encounter as an emerging artist in Egypt?

The main obstacle is the existence of record labels that want the music that's up and coming in the Egyptian scene. The only label I can think of currently is SubSpace and that's still pretty small. Also, the market for the type of music being produced isn't quite there. The majority of Egyptians would rather listen to monotonous local music through the loudspeaker of their telephones.

I think the music scene in Egypt is growing and it's been brilliant to watch. The development of the artists that have been emerging has been great, Safi and Adam [Awad] are coming out with their albums and EPs, which is really exciting. I honestly think the music scene is going to start to get much more exposure over the coming few years.

Where do you see yourself in five years?

I don't even know where I'm going to be in a month let alone five years. I like to take each day as it comes and see what happens. I do hope I'll have at least one album recorded properly though, with more instruments and such. Fingers crossed.

Find out more about Kareem Hosem and his music on his Facebook fanpage here.