Hailing from Berlin, Olaf Bender aka Byetone is an internationally renowned sound and visual artist as well as co-founder of the German label Raster-Noton. CairoScene caught up with him before his recent performance at the D-Caf Festival in Cairo... 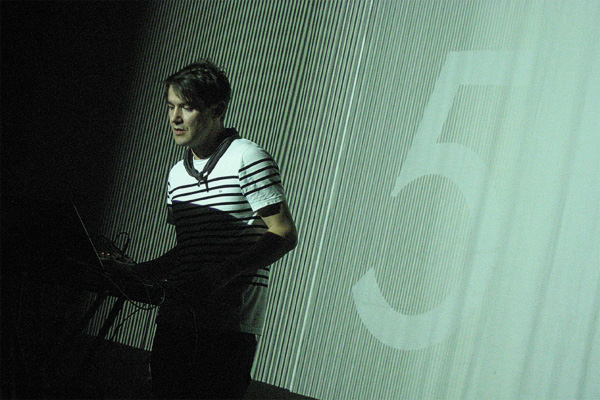 Kicking off his musical career by manipulating audio and video materiel soon after the fall down of the Berlin Wall in 1989, Byetone’s critically acclaimed work is known for its sharp sense of aesthetics creating a powerful audiovisual experience. He combines perfectly crafted electronic sounds and real-time visualisations that sit between sound art and the finest dance music.

In Cairo for the D-Caf festival, the producer recently took to the stage at Scheherazade - the hauntingly beautiful (if not now somewhat dilapidated) throw-back to Egypt’s golden-age of cabaret. We managed to squeeze ourselves in for a quick one-on-one just after his sound check to chat about his expectations for the performance, the vision he tries to transcend through his visuals, his eclectic influences and the minimal techno scene in Berlin….

This venue is quite a departure from the usual locales you perform in. What do you think of it?

The venue is beautiful, I love it. I’m surprised how good the sound is as well!

Tell us about the use of visuals during your performances…

When I started to do electronic music it was in the 90s and at the time I didn’t have a power booth. I had a real computer on stage and a big monitor which was really inflexible. I started to use the visuals to make it more interesting. I mean it’s boring to see  a man behind a computer, it’s hard to recognize what he’s doing. You don’t know if he’s answering an email or something! Although audiences have since become more sophisticated, they have a better grasp of what it is we do, it’s still difficult as a laptop musician.

How does it feel to be hading up your own label Raster-Noton?

The label is getting old at the moment. We are on the 17th year. We’re mainly interested in musicians that have a strong identity. I really like it when you look behind the act and you see character. I’m looking mainly for musicians that try to work with computer technology. It’s a really artificial sound but this is where we’re coming from and what we’re trying to hold on to that.

Now that you've performed in Egypt, would you ever consider brining some of your own label's acts to perform here?

Yes! I hope so. I mean very soon we have an interesting collaboration here. It’s an invitation from the Goethe Institute and are working together with some musicians from Cairo.

So why do you think Germany, especially Berlin, has been leading the music scene in the past couple of years?

Germans are synonymous with engineering, and this music (techno) fits really well.

What are your influences?

I grew up in East Germany, which was a little different. We had a strong relation to the old regime so I had a real influence from the Russian filmmakers. And music wise, I’m really into the music from the 80s. I am also influenced by some music from the 60s, so I don’t want to really specify a certain age.