After Bosaina put Egyptian electronic music on the map by becoming the first homegrown talent to be inducted into the Red Bull Music Academy last year, London/Cairo-based Sarah Badr, AKA FRKTL, will be heading to this year's edition in Paris. 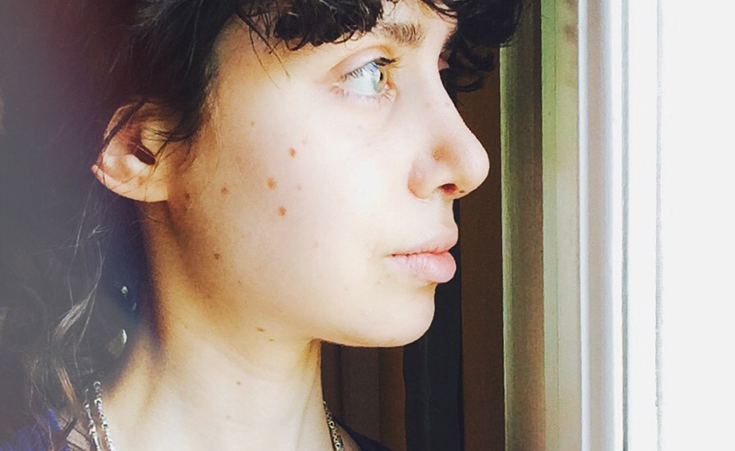 Red Bull Music Academy (RBMA) is the holy grail for any budding Electronic producer; a sonic playground featuring two weeks of collaborations with like minded artists, talks from legends in the industry and non-stop gigs. Alumnis include the likes of Flying Lotus, Evian Christ, TokiMonsta, Hudson Mohawke and Fatima, not to mention Bosaina, who became Egypt's first homegrown talent to be included in RMBA, last year in Tokyo. This year, another Egyptian has been included in the RMBA line up who will be swept away to Paris this October. Meet Sarah Badr, AKA FRKTL, born in London and brought up between UK, Bahrain, Egypt and the US she seems like one of those characters in school who would annoy you due to their sheer talent, someone who picks anything up and is much better than you at it. An audio-visual artist, computational designer and experimental composer, Badr is also a classically trained instrumentalist. She started playing keyboard at three, whilst living in Manama, before moving on to Suzuki method of guitar playing, and then classical piano... All before the age of seven, before discovering alto saxophone through school. In 2010 she began to teach herself violin around the same time she started producing electronically, which would lead to the Neo-Classical, bass-driven ambient 10-track debut album Atom, an album that certainly wouldn't seem out of placed being released by a label like Erased Tapes with artist such as Nils Frahm on their roster.

In Atom enigmatic industrial rhythms intertwine with a rich tapestry of field recordings and classical instrumentals. It's a carefully crafted sonic experiment that's both ice cold and oozing with soul, revealing an untamed sense of artistry. Fearlessly eclectic in the sounds she chases, a maniacal Jazz trumpet riffs on rough cut metallic beats in Cassini, and all of a sudden you're left floating across Lyst, as the quietest of Techno-esque drums reach out from a murky pond of bass. Every track gleams with character and textural qualities that tell a story.

Currently working on her second LP before joining the Red Bull Music Academy, we catch up with Badr to find out what she's all about...

What kind of music did you listen to growing up?

Everything from Classical, Folk and Jazz, to Rock in its various guises, Hip-Hop and Pop (though my love affair with the mainstream was short-lived). I recall Radiohead's OK Computer in particular being an inflection point, after which I discovered Trip-Hop and was engulfed by the world of electronic music. It was then that I began to explore more experimental work — both from earlier decades, as well as contemporary — that fused many of the aforementioned genres and/or integrated new technologies in ways that went beyond traditional instrumentation.

Who are your go to artists these days when it's headphones on at the airport...

The list is far too long and ever-changing, to be honest. I have an account on Last.fm to help keep track of all the artists I listen to. But you'll find many of them on some of my favourite labels at the moment: Erased Tapes, 1080p, Infinite Machine, Umor Rex, RVNG Intl., Orange Milk, Software, Astro Nautico, Friends of Friends, Astral Plane, Future Classics, Project Mooncircle, Bad Panda, Atomnation, Activia Benz, and PC Music — as well as the usual suspects like Warp, Planet Mu, Monkeytown, raster-noton, flau, R&S, Ghostly, Kompakt and Ninja Tune.

Where does your writing process begin?

It depends on whether it's a standalone track with no particular purpose, or something intended for an album that's currently in production. My approach isn't very calculated in either instance. But whereas the latter would follow a predetermined theme/flow, the former could be inspired by anything from an image I've just seen and liked to a passage in a book or film that I've just watched and been moved by. Up until now, I've tried to avoid using samples with the exception of sampling my own instruments or field recordings — which is the entire premise of FRKTL as a project: building increasingly complex layers from initial, singular sounds.

What's your productions set up?

What do you make of Egypt's music scene today? Any artists you admire?

I'm afraid I'm never in Egypt long enough at any one time to become deeply familiar with the local scene or embedded enough within it to enjoy all that it has to offer. That said, I've been very impressed by the Electro-Shaabi output from Madinat Al-Salam for the past four years or so. Everything on Mumdance's mix for Dummy Mag, for example, is incredible and an absolute delight to listen to.

Any advice for up and coming Egyptian producers?

Listen to as much music as you can from all periods of history and corners of the world. Explore the sounds that fascinate and excite you the most. Master the tools that are available to you — and when certain tools aren't available and you at least have a computer, know that you can programme pretty much any sound on your computer using free, open source environments like Pure Data. Plenty of tutorials and active communities which can be relied upon to help get past the learning curve.

Most importantly, I think, is that the world is increasingly small and the so-called “gaps” between cultures are narrowing to the point of irrelevance. That is to say: ignore the pressure to imitate particular sounds or fit within specific genres that are commonplace within Egypt or elsewhere. Connect with likeminded people in your neighbourhood as well as online, worldwide, to share your music, collaborate, and find inspiration. Platforms like SoundCloud, Bandcamp, Last.fm, Audiotool and Splice are perfect for all of the aforementioned. And have fun!