Making his solo debut at the Cairo Jazz Club on November 25th, Beirut-based alternative artist Gurumiran is set to introduce Egyptians to his latest internationally selling album Aberrance. We speak to the musician to find out more... 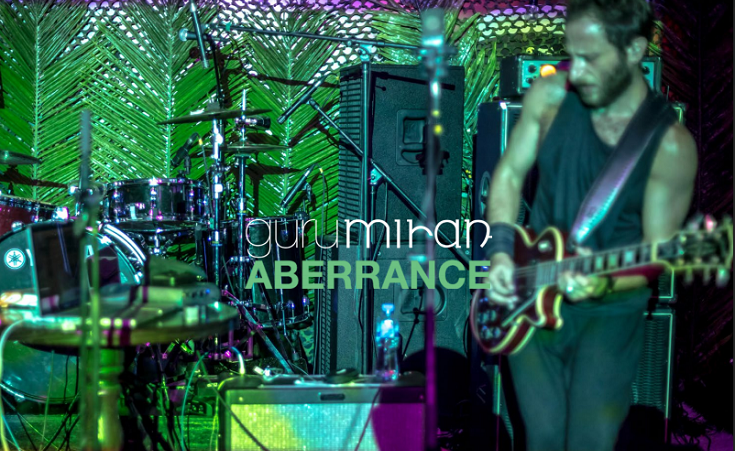 The Cairo Jazz Club has long established itself as THE hub for the best international and local underground acts, with a variety of genre-spanning bookings every week, and a myriad of curated monthly series catering to whatever sounds your ears are craving. On November 25th, the nightspot will be welcoming from Lebanon underground rocker Gurumiran. Supporting the release of his latest album Aberrance, Miran Gurunian aka Gurumiran will be bringing his diversely unique sounds and making his Cairo debut, alongside local musical hero Ramy DJunkie. Excited at the prospect of hearing news sounds out of Beirut from one of the region's most influential musicians on the alternative scene, we decided to contact Gurumiran to learn about his musical development and what music fans can expect next Wednesday.

When did your passion for creating music begin?

My passion for "playing" music began when I was about five or six years old. My parents would take me with them to pubs and concert halls to watch performances by their peers. I was immediately hooked. When I picked up the drums at around six or seven and then the guitars around 12-13, I was always learning songs off records. So given my limitations, I used to modify the music I was learning to fit my abilities. Eventually, modifying transformed into improvising into writing my own music.

When was your first album released?

I was a founding member in one of Lebanon's rock bands, Blend. Our first album on EMI - which I co-produced and wrote - was released in 2003 (Blend - Act One). Aberrance is my debut solo album and was released earlier in 2015.

How does an idea in your head become a track?

My creative process was a bit different for Aberrance, given that I was the sole songwriter and lyricist. Often, a song can start from a melody, a text, a conversation, a movie, a painting, an encounter, a book, news... Once the initial spark is there, I build around that idea and see where it can be taken. With Aberrance, I tried to build the songs using a single guitar connected to some stomp boxes and a voice. I then asked my co producers Fadi Tabbal and Carl Ferneine to arrange, and together it just worked!

Are all your songs in English? Is there a language barrier in Lebanon?

I write mostly in English, but sometimes I have some sentences in Arabic or Armenian. A barrier is relative. English might be a barrier in some Arab countries, but for the most part in Lebanon it isn't. I settle on writing with the language that I feel most comfortable expressing my ideas in. I don’t hide the fact that I would love to write full songs in Arabic or Armenian. Hopefully that'll happen soon.

What would call your musical style? Electro Rock?

I’m not a fan of labelling styles, but I guess people need one. I’m influenced by traditional ethnic music, Jazz, Rock, Electro, Ambient, Musique Concrete, etc. and my music is a reflection of these influences.

Describe your stage set up? What gear do you use in performances?

On stage, I’m often accompanied by Fadi Tabbal and Carl Ferneine. Also, Bojan Preradovic joins for some backing vocals and guitars whenever possible. But when I’m on tour, I often try to invite new musicians on set. In my last NYC tour, I had two amazing musicians join me - Delaney Stockly (violins) and Mayssa Jallad aka Safar (voices).

As for gears, I use a single guitar (a moded Gibson Les Paul custom) through a VOX AC100 with a bunch of effects, some custom made, and some tweaked by me. I like building my own processors and tweaking some old ones. I run my voice through ProTools for effects.

I also have an interactive visual system that I used during my live performances. It’s called the Glitcher, conceived and developed with Lebanese artist Omar Fakhoury (also album artwork) and three of my electrical engineering students at the American University of Beirut (Hiba Shanaa, Amal Chreiteh, and Nour Absi). The system is designed and programmed to glitch and distort a live video stream, based on the content and information of a live audio (my voice, guitar, electro/ambient sounds). The end effect is something similar to the album cover of Aberrance.

Too many to name here, but to give but a few references: Nick Cave, Grant Green, David Bowie, Miles Davis, Thom Yorke, Astor Piazzolla, Jack White, Philip Glass, and Depeche Mode records were some of the regular and familiar references for this album. Locally, every musician I met or worked with was definitely a major influence. But if I have to name a few, Toufic Farroukh is a big influence, so are the Syrian band Tanjaret Daght.

My first gig was probably in school where I played Imagine. That was around 1995. All gigs are interesting and important as they shape and influence me. I learn a lot from each gig whether good or bad, and it's a pleasure to discover new faces every time. I dream of playing in concert venues that have unique sound capabilities and acoustics. I also like to play music in places where people cannot afford to attend concerts and cannot be exposed to music or other performances that would allow them to grow, dream, and liberate themselves.

Have you played in Egypt before? If so how was that experience?

I have accompanied Tania Saleh on two occasions in 2006 and 2007 in Dar el Opera and the El Genaina Theater. It was beautiful and the audience was quite diverse and very attentive, I must say.

What are you most looking forward to at your upcoming show at the CairoJazz Club?

Presenting my solo debut Aberrance to a new crowd in a club that is packed with contemporary history and heritage.

Do you have a release coming up?

I’m releasing the vinyl edition of the album in Beirut this upcoming December, which includes remixes of my single Waterfall by Diamond Setter, Georges Tabet, and Liliane Chelala. Also, the vinyl edition will be available in Europe in 2016 via my UK label, Cargo records.

Where is Gurumiran five years from now?

Hopefully five years younger. With probably another album out, and new tools to write and record music!

To hear more of Gurumiran check out his SoundCloud or visit his official website.