We got word that the Tuesday night resident at After Eight is a 51-year-old female DJ – a rare breed in Egypt. We bring in the country's most experienced female DJ for a chat on her start in the business, the type of music that makes her tick, and her work as a visual artist. 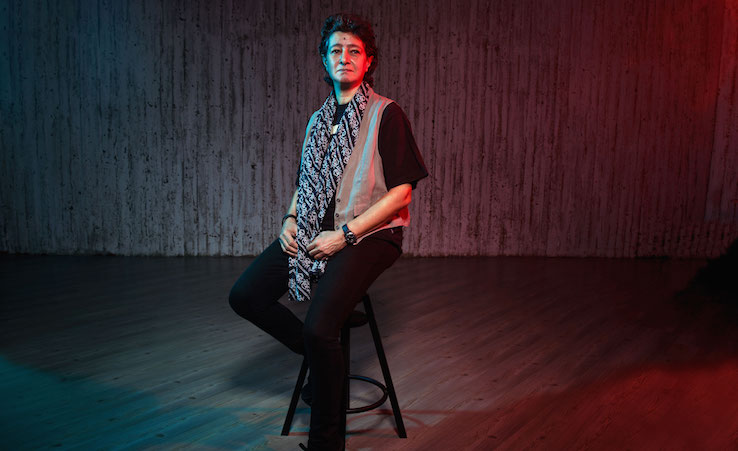 It’s a normal day at SceneNoise HQ; music is playing, writers are writing, pot heads are smoking, nothing is really happening. That is, until we get a call from one of our leads; he tells us he got us an interview with the Tuesday night resident at After Eight. We think to ourselves that maybe we should start finding new leads. Then we learn that the DJ in question is a 51-year-old female who has been playing music at After Eight for over 11 years.

As soon as Dina Ghareeb starts talking to us we realise that what we have on our hands one of Egypt’s most successful female DJs, but she doesn’t admit to it. “I don’t consider this a career, I do this as a hobby; it’s something I tried out 11 years ago at After Eight, following up on a request from the owner who heard me play music at a house party and asked me if I wanted to try my hand at doing this professionally,” she tells us. She picked Tuesday night because she thought it was going to be quiet and that no one was going to show up. Fast forward 11 years and Tuesday nights at the downtown watering hole command a full house. Ghareeb's work as a DJ landed her another gig at Bulls Eye where she held residency for seven years. Her music spans different cultures; it's world music with a twist of house, oldies, and other sounds that she picks based on her own liking. “It’s something that I do because I enjoy it, I never though of it as my job," she says. "I really have fun playing this music – world music coming from India, Venezuela, Ghana, etc."

Ghareeb's music has even taken her overseas – Berlin, to be exact – and yet she still won’t admit she's a professional. She credits the Berlin gig to the Egyptian Cultural Resource, saying that “It wasn’t about me, they had artists from all over the Arab world and they needed a girl from Egypt.” She insists that her main job is her role as a visual artist, showing us her (outstanding) work, which is exhibited in different galleries where it is on sale to the public. She was a professional hand ball player until she was 34, and also played as part of the national team. “I love hand ball, I kept playing until my last breath," she says. "Despite three knee surgeries, I kept going.” “During the revolution we closed down for maybe three days that were the most intense," Ghareeb reminisces of her time at After Eight in 2011. "Apart from these days, we played music every night, during curfew hours, and people would come in to drink and party. I played revolutionary songs that came out at the time – Ramy Essam would give me new songs about the revolution he had just recorded and I would play them at After Eight. These were the best days of my life.”

She continues to play at After Eight every Tuesday, spinning her take on world music. The crowd is different than your regular mid-week Cairo party; it attracts a different set of people, different ages, backgrounds, and musical affiliations – a world crowd. It’s a floundering scene in Egypt, not as many followers as house and techno, but still, people like Ghareeb have been carrying this type of music on their backs for over a decade now, with no sign of slowing down.

Catch Dina Ghareeb every Tuesday at After Eight and follow their Facebook page here for events updates.