A new form of ritualistic ceremony has graced the stages of venues throughout Egypt, a transcendental journey of sound led by Jordanian duo Rawan Risheq and Atef Malhas, collectively known as SemaZen. They sit down with Seif Bibars for an interview ahead of the last gig of their Egyptian tour. 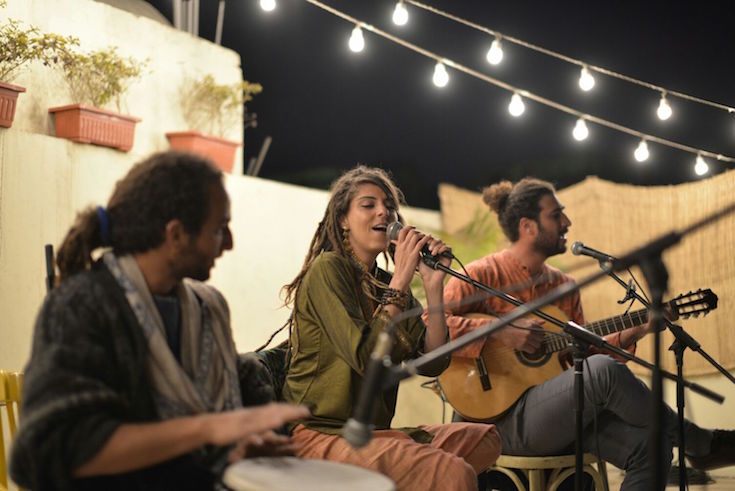 Fascinated by the phenomenon that is ritual chanting music, which has never before manifested in Egypt with such outstanding quality and finesse as has been done by Jordanian band SemaZen, I was happy to find out that I’d be interviewing them. SemaZen plays spiritual music from different faiths, cultures, languages, and countries - a kind of chanting circle where everyone is engaged, in order to form a unifying vibe. As part of their tour, they’ve played at venues like Darb 1718, 3elbet Alwan, an undisclosed rooftop venue, and a live concert in Dahab. Prior to their last scheduled gig in Egypt at Sufi Bookstore, I sit down for an interview with Rawan Risheq (lead songstress), Atef Malhas (instrumentalist/backup), and Moose El Smile (Egyptian percussionist, accompanying them for their Egyptian tour).

So, guys, for our readers who have missed your performances and don't know about your music, let me start by asking, how would you describe your music?

Rawan: It’s a variety of ways people sing and worship, collected from different places while we were travelling. They are songs that exist already in different communities and places. We present them in a participatory way; we project the lyrics on a screen so as to have everybody sing as well.

Atef: We don’t always see it as a traditional performance; we see it as an interactive performance. People are singing and the more they sing the more we give back, and vice versa. It's like a transcendental experience - we transcend together, we become one by singing together, by having our own vibrations unite.

Moose, what do you think of SemaZen’s music and how it would compare to other musicians doing something similar to it here in Cairo?

Moose: I’ve known them both prior to them forming the movement, and I knew that the music that they would create would be awesome because they are both superb musicians. I don’t think there are many artists doing the same as SemaZen in Egypt - maybe Islam El-Shaary, and there’s a band in Alexandria who do group chants called Mawaweel. With SemaZen, it mainly depends on the crowd so I thought it would be tough for them to engage the crowd here. I was surprised at how responsive the crowds were. I think this is what makes them really special.

What kind of venues do you guys usually play?

Rawan: We tend to avoid venues that serve alcohol; any other venues we play. This is because alcohol brings into the mix a state of drunkenness which usually hampers the crowd from reaching the meditative state we are aiming for.

Your performance with SemaZen was pretty great. How much time did you have to practise with them before the performances?

Moose: Zero time. We only jammed a couple of times; I didn’t know any of the songs - I would find out each song as it was being played live and improvise. I don’t consider myself a great drummer but, thank God, I was able to meet their expectations.

Where do you guys want to go with your art?

Rawan: Touring. We began with Egypt; we hope next for Palestine and North America. Also making original content, coming up with our chants.

Atef: One of the visions I have is for one of the SemaZen shows to be carried on by others so that we can have two SemaZen shows happening at the same time in two different countries, and a vision to extend the performance into a big full Chill-Out/Ambient show played by many instrumentalists.

What do you think people will think of your ritualistic music in places like Cairo, or Abu Dhabi, where traditional religion is prevalent and less open to concepts like yours where people can go to a concert to receive their spiritual dose instead of going to a mosque or church?

Atef: I feel that we are like all artists; we just do what we do, whoever likes it and gets inspired by it will come and whoever doesn’t will leave, and that’s okay. Those who like it will spread the word and those who don’t will, also. It’s good, sometimes, to be provocative, but softly. We don’t go and sing a Jewish song in the middle of Amman just like that; we want to someday soon, but we still don’t know when, because we are trying to show that followers of all religions can be brought together under one common thing, which in this case is music.

Moose: I think that some people might accept it, some might not. The younger generation won't use this instead of going to a mosque or church, but to complement their traditional prayers. It might take some time for our society to accept such methods of spiritual practice, but it is helpful for those who need it and if it is then it will somehow find a way to prevail.

Do you think music concerts like yours, or rituals as you call them, will be accepted by the religious sect of society?

Rawan: The essence of all these religions is messages like "lakom deenakom w leya deeny" (Arabic for “practice your religion and let me practice mine,” a phrase said by the Prophet Muhammad PBUH) and “accept thy brother and be kind to thy neighbour,” but when religion is politicised and used to separate, it turns into something else. I accept all faiths, and the concept behind SemaZen is to respond to the way religion is used to separate – it’s to say we are all the same. There are a million ways to kneel down and pray, and we can celebrate together that we all believe in something - whatever that is, whether it’s energy, Jesus, Jah, or Allah, any of the names or archetypes. Spirituality is not the problem in the Middle East; in its truest form, it won’t interfere with what we’re doing. It’s just the manipulation of the political game, and we're not political, so we don’t think we will have a problem.

What I saw in your previous concert was people losing themselves and connecting to something - whatever each one believes in and believes to have connected to on that evening, there was something that we managed to invoke and connect to. Did this happen by coincidence or was that the intended purpose?

Atef: At first we were just singing; as we started seeing people connect to a higher power through our music, people coming up to us and thanking us for leading them through this experience, we are now starting concerts with this purpose. Sometimes we use a singing bowl - a singing bowl is a Tibetan instrument used to cleanse the energy in a room, to help clear people's auras and energies, trying to help people reach God through chanting and dancing. Being able to facilitate this experience has definitely humbled us.

Do you think practising spiritual rituals like yours will meet widespread acceptance from our narrow-minded Middle Eastern societies, or do you think you will be persecuted?

Rawan: I was born to Muslim parents so was Atef. I had tried praying and I never felt connected while doing it. Then, the first time I travelled into the wild in Indonesia, I was standing in front of a waterfall - never having been exposed to meditation or other practices - I sang Quran. I wanted to read it but it came out as song! It felt so authentic; it came from somewhere deep, opening me up. I think it comes intuitively to many people that when we are in joy or sadness, to sing. Music and song are very emotional, heart opening and healing. Music has been used from ancient times to celebrate, mourn, and pray - I think we sang before we spoke. The misconception that music is a sin must change. I mean, of course some music sinful; music conveys messages easily - an angry song can make a person angry, a lustful song can make a person lustful. Our songs are sacred and enlightening, so it enlightens people. It shouldn’t be considered sinful. I’m sure we will be criticised, but hopefully not persecuted. It's all in respect, there is no reason to feel like our music is against religion.

At the end, I would like to ask a very shallow and silly question that I’m sure all your fans would want to find out the answer to. Are you guys dating or are you just friends?

Rawan & Atef: Hahahahaha no, we are not dating, we are just very good friends who have known each other for a long time.

So there you have it, folks, the hippie goddess/songstress Rawan Risheq and heartthrob instrumentalist/singer Atef Malhas are not dating! That doesn't mean they are single, though.

They want all you artists out there to know that you are welcome to submit lyrics, or demos of your musical performances, if you think they will work with their direction. To reach them for collaborations or bookings, contact them on the following e-mail address: semazenband@gmail.com, and for more info and videos check out their Facebook page here and YouTube channel here. 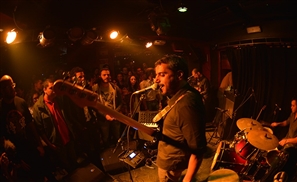 Scene Noise correspondent Kamila Metwaly meets the Jordanian band ahead of their [...] 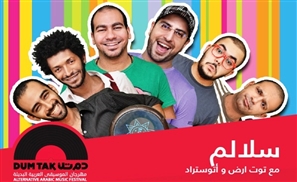 Performing in Jordan tonight as part of the annual Dum Tak Festival, Salalem are [...]

Going strong for well over a decade, the Cairo Jazz Club is a veritable Egyptian [...]
Week Month Year