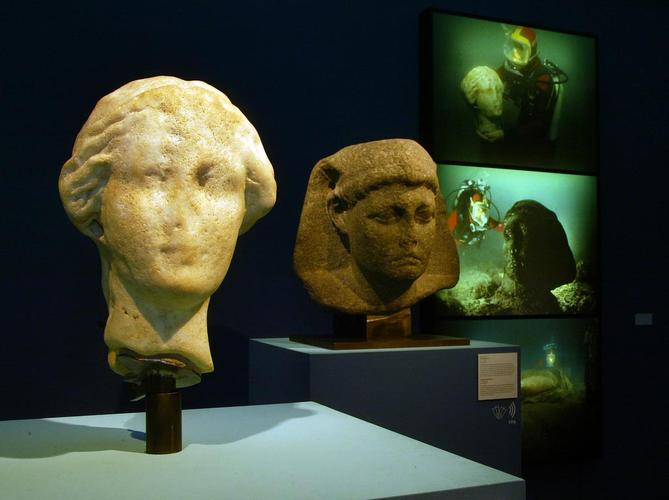 Tourists may not feel completely safe returning to this renowned culturally rich country in the wake of a destabilising revolution. Looking to reignite the passion for Egypt’s ancient history, the Supreme Council of Antiquities has agreed to tour an exhibition entitled ‘Egypt’s Sunken Treasures’ around Europe.

On tour for the next three years with planned stops in London, Paris, and Berlin,  ‘Egypt’s Sunken Treasure’ will be exhibiting a series of artifacts that resurfaced during underwater excavations conducted by the Institut Europeen d’Archeologie Sous-Marine (IEASM).

The excavation, led by Franck Goddio, President of the European Institute for Underwater Archaeology, in co-operation with the Supreme Council of Antiquities in Egypt, was conducted in the Aboukir Bay of Alexandria in 1992.

In a deal made with Supreme Council of Antiquities in Egypt and Franck Goddio, the exhibition generates €600,000, with the addition of €1 on each ticket after the number of visitors exceeds 100,000.

“The exhibition aims to promote Egypt’s inbound tourism, enhance the cultural relations between Egypt and the E.U. countries and increase the revenues of the Antiquities Ministry in order to fund suspended archaeological projects,” said Antiquities Minister Mamdouh el-Damaty in the statement.

Accompanying the 207 pieces from the Department of Underwater Antiquities will be 31 pieces from the Alexandria National Museum, 22 from the Greco-Roman Museum, and 15 from the Museum of the Library of Alexandria. Highlights of the exhibit will include several colossal statues, as well as a collection of item discovered that belong to Napoleon’s naval fleet on their mission to Egypt in 1798.

To ensure the safety and protection of these precious artifacts, Al-Damati said in a statement that the ministry has insurance to protect the artifacts in the exhibition against any kind of damage, loss, theft, or confiscation, including cases of natural disasters, wars or emergency reasons. “The cost of insurance for the exhibition is more than $150 million,” said Al-Damati.

The exhibition is set to launch in  Paris on December 7 and run until January 7, 2015, then will appear in Germany on April 15, 2016 to August 15, 2016, ending in London from November 15, 2016 to November 15, 2017. It is expected to attract over 3 million visitors, and will hopefully reignite the passion of tourists, inspiring them to see the rest of the collection in Egypt.