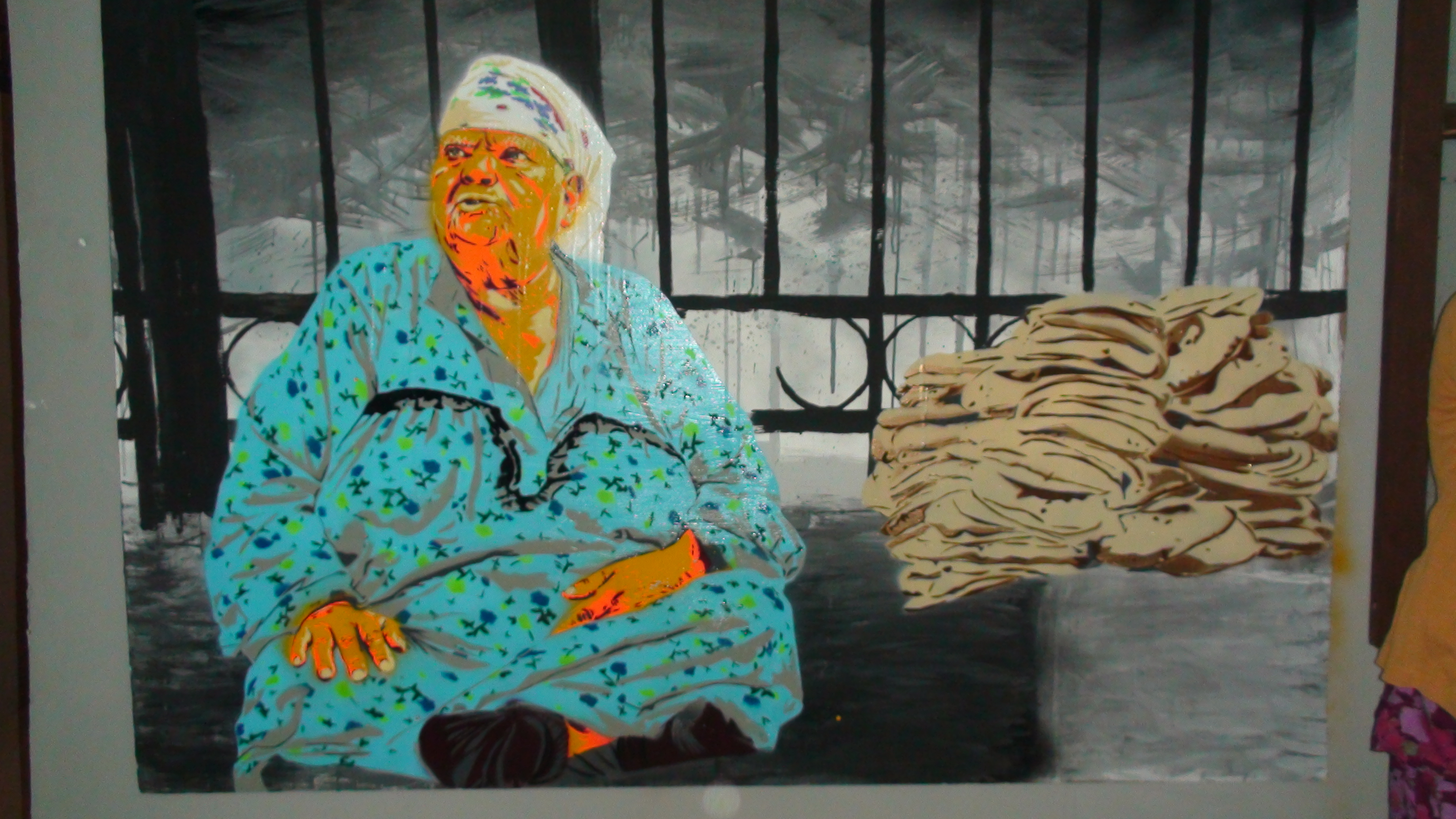 A walk down several winding paths, in between the most unlikely nooks and crannies of the obscurest of Downtown Cairo's streets, and one finally finds oneself wandering into Heytan; the latest in this noisy city's myriad and eclectic arts scene.

Launching with its first exhibition, entitled “Kafa7teya” (a colloquial term used to refer to numerous types of street vendors), the art space and street artists' collective was the brainchild of renowned graffiti artist Mohamed El-Moshir and Mahmoud Salem, (more commonly known to the world as Sandmonkey). The space/concept has been in the making for years, and after much ado and many obstacles (including the arrest of one of the space's contractors on cooked up charges, and a raid by the municipality authorities that resulted in one of the workers having his arm broken), Heytan finally materialised on Monday evening.

The exhibition focuses on street vendors, and showcases graffiti by El-Moshir and photography by Amira el-Asmar, who also documented the entire process of the project. But unlike other exhibitions focusing on similar subject matters, rather than sufficing to simply document the subject matter in an attempt to force some contrived socio-political commentary, the artists instead have chosen to directly engage with the subject, as well as its surroundings, which in this case are one and the same.

Graffiti art has always occupied a unique place in relation to its surroundings, but Kafa7teya seems to go several steps beyond. What is on the walls of the exhibition is just a small part of the full project. The full project involved him creating stencils of the street vendors he knows, and who work in the surrounding area, but he didn't stop there. The main aspect of the project was creating artwork for the street vendors themselves to promote their small businesses.

“The idea began when El-Moshir decided that he want to create graffiti of all the street vendors we see every day,” Amira el-Asmar says. “It started off with the street vendors in Downtown and the other places we know, but then it grew.”

From Amira, the woman on 3arabeyet el-batates (who was present at the exhibition's opening night), to the young 7awi who makes a living as a fireblower, to Sameh with his kebda stand; El-Moshir's project did not simply suffice to depict them around town. Rather, it became a full marketing campaign, aimed at creating visually compelling material to promote the vendors' work.

The work is quite different from anything we've seen El-Moshir do since the revolution broke out three and a half years ago. It's not the sharp political commentary that has come to characterize his ouevre. Instead, El-Moshir has chosen to almost stand down completely from hard politics and focus on something else.

“I intentionally stayed away from politics in this work, because, while most of my work was political, graffiti is not just about politics or fighting. As for the subject of this project, I feel that this was the basis of the revolution to begin with,” he says.

“With Kafa7teya, we avoided speaking about the [political] issues. We figured, instead, that we can take a shorter route and attempt to solve the problem, or try to affect change,” he adds.

Further, in post-June 30 Egypt, graffiti is gradually being pushed off the streets by the people themselves. After it exploded on the scene during and following the revolution and gained a largely positive reception, graffiti would later become one of the last few remaining outlets for dissent due to its position as an unsanctioned phenomenon, but even that appears to be changing.

“At the current time, anything that is directly revolutionary is met by immediate rejection from the people. So even the people themselves are no longer accepting of graffiti. We're no longer able to reach the community on the streets,” El-Moshir continues.

“A lot of the time I went out with the pure intention of creating graffiti that would anger people or get under their skin,” he says. “For me, [Kafa7teya] is a new way of trying to reach this class of people, and get them to understand graffiti art.”

“We tried creating art for this class; art that they can understand [to counteract the notion that] art is only for the upper classes. Most of the people coming to the exhibition are from the same class as the vendors, and this is art that affects them directly.

“We chose something simple to begin with, which was street vendors, and rather than simple address it from the perspective of 'look how poor they are.' We began essentially changing their places of employment as a means of very direct advertisement and marketing campaigns.”

It's an entirely new take on art forms that speak to their surroundings, but perhaps for this reason, it is more successful in doing so. Unfettered by the presumptions placed on art for it to engage with some sort of theory, both Heytan and Kafa7teya seem to break the implicit fourth wall of art that keeps art in one confined space (along with its select and limited audience), and everything and everyone else outside of it.

“[The marketing campaigns were] one aspect of it. Another was to have an exhibition to counteract the perception of many a gallery-goes that street art is not really art, and that art should be presented in a certain way. In this exhibition, we did both; we did the street art in a certain way, which has a purpose, and we had the exhibition, in order for the vendors themselves to come with their friends,” El-Moshir says.

As for the space, “We've been trying to open the space for about two and a half years. Graffiti artists always have the problem of wanting to paint but not having a space to do it,” El-Moshir says.

“The idea was not to be within an open or a closed space. It was a question of solving a [logistical] issue.”

But certainly, having graffiti art within this closed space pushes certain boundaries. Not to take away from its status as street art, as that never stopped being the main focus of the initiative. “All the works in the exhibition are recreations of murals that were done on the streets,” Mahmoud Salem says.

As it stands, in addition to giving graffiti artists a platform to group together and have a space to document their own work, as well as hold workshops for amateurs, the project itself holds potential to force a dialogue between what is considered “gallery art” and what is considered street art.

Salem, who went in as a producer, says that his part in the project ends here. After securing the space rent-free from the Ismailia Company, and ensuring that the project had enough financial backing, it will now be taken over by El-Moshir, and a group of four other graffiti artists (who remain anonymous for the purpose of licensing issues, but whose identities one can easily imagine by association).

The exhibition continues until June 30.