[Exclusive] Heba Radi talks to the members of Mazaher on their controversial exorcism rituals which they predict will soon be extinct. 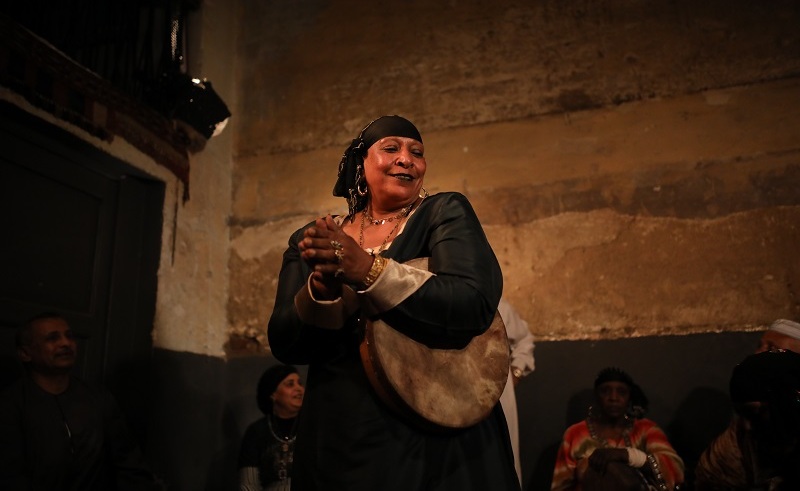 The Zar, an extravagant ancient exorcism ritual that's believed to have found its way into Egypt in the 19th century, is on the verge of fizzling away. Near Saad Zaghloul metro station, in Cairo's vibrant downtown, one Zar ensemble, namely Mazaher, continues to uphold the tradition by performing the vigorous singing and dancing routine, albeit just to put on a show. No demons being evicted here.

"This is a true Egyptian art," tells us the 68-year-old lead singer Madeeha. "I came into a world where performing the Zar ritual was everywhere around me. By the age of 11, I completely gave in to it and started joining performances myself." The rituals of the Zar greatly differ from one area to another, though all involve heavy use of drums and a lead singer. The similarity to tribes' practices in Northern Ethiopia compels researchers to believe it originated there and later came to Egypt under Mohamed Aly's rule. Dismissing demons is the main purpose of the practice, leaving it at odds with Islam, which strongly prohibits Muslims from attempting to interact with or contact the 'world of jinn' (demons).  The ritual is naturally outlawed in Sharia'-ruled countries such as Saudi Arabia. In Egypt, the Zar rituals were passed down from one generation of performers to the next. But as it stands, it's not going any further.

"My mother taught me everything I know about Zar, and she learnt it from her mother," Madeeha further explains. "But this was in another world; now even my own kids won't ever consider learning how to perform. It's almost as though they're ashamed of it. One time, my youngest was walking home from school singing one of the Zar songs he often overhears, and this drove his older brother insane and he made me promise not to let him get into the Zar."

But the fact that Madeeha leads the only remaining Zar band doesn't mean they're not keeping it alive. Over the past two decades, Mazaher Band was hosted by cultural festivals and events all across Europe. What was once a controversial exorcism ritual has now mostly become a cultural ceremony, but it doesn't come close to the real deal.

"When you're performing an actual balady Zar, nothing limits you. There's no specific time to finish and everyone gets into a state of trance. The one we do on stage here is more like a performance, it doesn't compare to the balady ones," says band member Ahmed Shankahlawy. The ceremony is commenced by a 20-minute chant lead by the singer. Drums slowly make their way in and mix with the mesmerising tune. Different traditional instruments like the Arabic flute and Phalnax, a 14-string guitar, intermingle with the sounds and immerse the audience in the euphoric, nearly-spiritual, experience. The above is not, however, how mainstream Egyptian media have come to portray Zar. At its arguably most misinterpreted version, the general public have come to see Zar as a demonic ritual with frantic drum beats and inexplicable lyrics. Which is the image fostered in Egyptian movies and drama productions for as long as they existed.

"I'm saying it once and for all, everything from the movies is just pure lies. This is not what Zar is," explains Sabah, a leading band member. "We believe, as our elders taught us, that every person is accompanied by a demon. And we basically just provide an environment where one can get comfortable to move and make peace with themselves and their demons It's a form of meditation."

On the most bizarre occurrences he encounters, he describes; "sometimes we get get cases which are in dire states. Maybe they stayed in the shower for too long or went to bed upset. We bring them to the floor and ask the Earth's Kings of Djinn to see if we can help. If their bodies go numb, then we have their cure. If not, then we can't help them. It's not just any nonsense."

Ahmed continues, "we don't address demons nor sing to them. The rhythm of the music compels anyone to dance along to it and release whatever they've been oppressing."

As with most traditional forms of artistry in Egypt, the Zar is mostly passed down through practice. Mazaher, though being the only band of its kind in Egypt, doesn't innovate when it comes to their performances. They simply replicate what they've known by heart since their childhood.

"We don't write down our songs and we don't come up with new ones. The lead singer just starts performing and we follow her lead because it's all songs we've listened our parents and grandparent sing countless times. We don't change anything." Mazaher's audience is diverse and in constant change. They could be tourists or just young Egyptians seeking to reconnect with their heritage. But the one thing they have in common is that they keep coming back.

"That's the beauty of our work, people feel better after they come and they always want to come back. They feel our sincerity and they like the experience. It's not like going to the dance at the club; here they sit and listen."