Pixels: The Digital Aftermath of the War on Terror

Pixels may have been a light-hearted, action-packed comedy about video games gone mad but Emad El-Din Aysha argues that the movie has a lot of deeper themes and numerous parallels to real life events and issues... 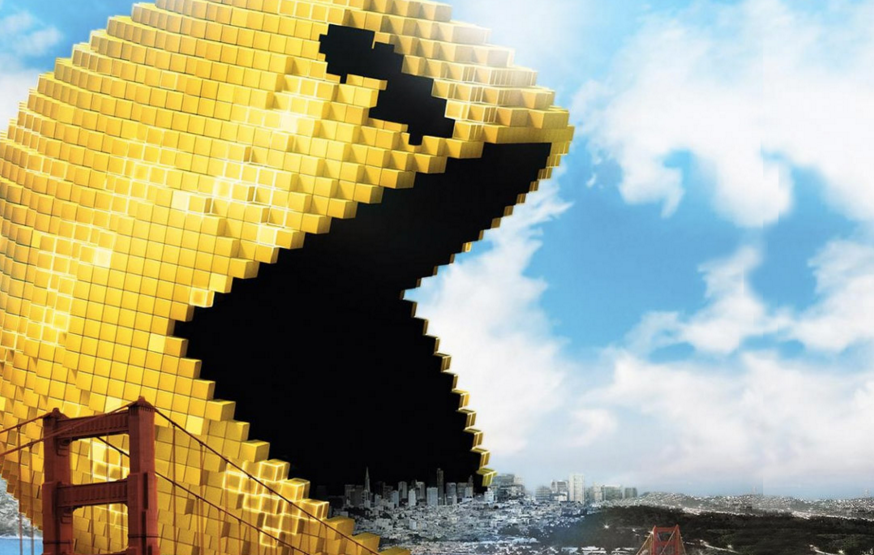 Adam Sandler’s Pixels didn’t make a stir over here, which is a real, real shame. Apart from being a funny, nostalgic, exiting, touching, action-packed, special effects extravaganza, it’s directed straight at us and in ways even the moviemakers couldn’t fathom.

The story begins in the sweet and innocent 1980s when computer games were simple - not horrendously violent - and brought people together. You have the young Sam Brenner (Adam Sandler, when grown up) in the 1982 Video Arcade Championship against Eddie "The Fire Blaster" Plant (Peter Dinklage) and his fan club of hot chicks. Brenner loses and its downhill from that point onwards, at least in his mind. You cut to a hilarious scene where he’s conversing with his grown up (and out) childhood friend Will Cooper (Kevin James) about how his life didn’t turn out the way he expected – he fixes plasma TVs for a living at the ‘Nerd Brigade.’

Then you to find out that Cooper is the US President, and an embarrassing one since he can’t read out the word “catastrophe” right in front of a team of girl scouts. This is a pun on President Bush’s famous school-story reading scene when he was told the bad news that the Twin Towers had been hit. The good thing about President Cooper, though, is that while he’s not terribly well-educated, he appreciates the well-educated and learns to listen to their advice when taking critical decisions. He has to too since that gaming contest in 1982 got filmed and sent into outer space. Aliens picked it up, thought it was a declaration of war and send their fleet out to destroy Earth using the same games (or weapons and tactics) we’ve ‘threatened’ them with.

Okay, maybe they got the idea from Futurama (two episodes, at least, have similar themes) but director Chris Columbus does an incredible job with the pixel special effects and the three dimensionality of the formerly 2D game characters (the centipede was seriously scary and who didn’t enjoy watching a Smurf getting blown to smithereens?). The casting’s really good too. Adam Sandler’s at his best as a down-on-his-luck geek and the love interest here, commander Violet, is gorgeously played by Michelle Monaghan. She’s one of those chipper Americans, slender and sexy and completely unappreciated by her soon to be ex-husband. The guy clearly doesn’t feel like a man around such an intelligent career woman – she invents the energy weapons to fight the alien games.

Violet’s also a responsible mum, refusing to cry in front of her sweet boy of a son Matty (Matt Lintz) when she gets the bad news, via a text message. Not that she doesn’t have her flaws, refusing a kiss from Brenner, not because he’s a complete stranger but just because he’s the TV repairman, not a millionaire. Pretty much sums up the US of A, doesn’t it!

Revenge of the Nerds

So, as you can see, the movie is chock-full of themes. The President’s war cabinet automatically, and insanely, think it’s the Iranians and refuse to listen to Brenner. But he and his other computer geek friends, the conspiracy theorist Ludlow Lamonsoff (Josh Gad), are hired to train the Navy Seals to fight the invaders – the guys are too macho and don’t have the request ‘cognitive’ skills for the job.

There’s lots of race politics going on too. Eddie Plant is blond and has a southern accent – Adam Sandler’s a dark-haired northerner – and his dream is to have it out with a white and a black supermodel duo. Eddie also turns out to be a cheater. He’s doesn’t understand that being a winner means being a role-model to others, and joins the big fight in the end against insurmountable odds to prove to himself that he has it in him to be a hero. The reporter who picks on President Cooper is Jewish like him, while the reporter who praises the President for saving the world isn’t. But there’s more to it even than that, evident in the Pac-man sequence.

They bring in Pac-Man’s creator, Professor Iwatani (Denis Akiyama), and he insists Pac-man has been “brainwashed” into being evil and that talking to him will do the trick. It doesn’t but the rest of the team shares the same sentiments. That’s a hint over the war on terror. Short Stuff: Peter Dinklage, at the far end, proving that heroism can’t be measured by a ruler.

Later you learn that the alien race were a happy, peace-loving people till Earth declared war on them, meaning that nobody is born bad and no one is beyond reforming; like Islamic fundamentalists. And the important thing in all cases is to fight fair and not pick on those weaker than you. Without even knowing it they’ve hit onto something profound here. Pac-Man, in the 1980s, became a symbol for greed – watch Wall Street (1987), Electric Dreams (1984) and How to Make a Monster (2001) – and today has become a motif for the Islamic State. Don’t take my word for it. Ask the former Saudi general Anwar Eshki of the Jeddah-based Middle East Center for Strategic and Legal Studies. His hunch is that ISIS was created to gobble up all the other terrorist groups. The catch is, like the Frankenstein-monster, it turns on its creators. Poor Professor Iwatani gets his arm gobbled off by the giant Pac-man let loose in New York.

The Digits of Nostalgia

Democracy during wartime is a key theme in the movie too, exemplified by Admiral Porter (Brian Cox), who has the audacity to push the President around. Note also the centipede attack happens in Hyde Park, the famous symbol of free speech in England, with a bossy SAS Officer (Sean Bean) telling people to clear the park so they can film a beer commercial.

You can see the importance of the Atlantic alliance with the British Prime Minister (Fiona Shaw), modeled on Margret Thatcher, and President Cooper’s inability to understand British English. This is a Britain that helps the US, but not one that takes order from the US; hence the scene where Sean Bean orders Adam Sandler around for being a “Yank.” Self-Indulgent Age: Well, at least she’s photographing something other than herself!

It’s a very heartwarming movie for me, personally, having grown up in the 1980s myself with all those wonderful games. And while the computer-driven world we live in originated back then, that world was completely different. As Sam Brenner explains about the “classics” like Defender, Pac-Man and Asteroids, they were: “Games you play in an arcade which was a building outside of your house. You would go there with your friends, listen to music, cute girls everywhere. In ancient times, they call it ‘socializing’.” Technology today makes you insular and irresponsible. Hence the scene with the Taj Mahal – an Indian guy takes a selfie while its being pixeled apart – and the SkyNews broadcast of the President making out with his wife (no privacy).

The man who anticipated it all, the Internet and satellite TV, Max Headroom (Matt Frewer), makes an appearance here. That icon of the eighties is sorely missed by my generation too. And almost in anticipation of this article, the latest book on ISIS is called Islamic State: The Digital Caliphate!