A new video has emerged showing a militant pouring a bucket of red liquid over his head. Whether it's a spoof or a ominous message is yet to become clear. 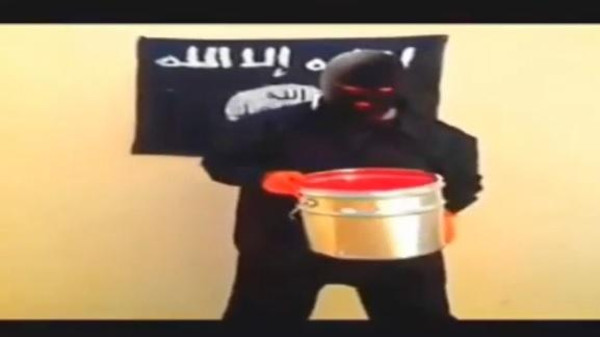 Proving that the Islamic State comes equipped with the internet, ISIS has latched on to the latest viral trend, the ice bucket challenge, but with a bit of a twist... instead of ice or water they use blood.

The video making the rounds on the web allegedly shows an ISIS member standing in front of the black flag with a bucket of red liquid. The red liquid is intended to symbolise blood but isn’t viscous enough to fool anyone into thinking it is actually blood, but rather red Gatorade or water with dye.

It is unclear where the video was shot, or if it is simply a spoof intending to mock the terrorist organisation. At the end of the video no challenge is issued and no detail about what the challenge intends to raise money for.

At the same time, another 45-second film released by ISIS depicts people being shot by snipers and vehicles being blown up. At the start of clip, the notorious black flag appears next to an American one splattered in blood, under the English headline “We will drown all of you in blood.”

There is yet to be a connection made between the two videos, however one could assume that if ISIS does indeed plan on drowning America with blood, they will need a lot of money. Since the ice bucket challenge has been a great success for ALS, raising over $100 million in just the past month, it stands to reason that this new blood bucket challenge intends on cashing in on the trend. However, we sincerely doubt that this challenge will go viral, as supporting terrorism isn’t exactly as popular as raising money for a noble cause or cure.